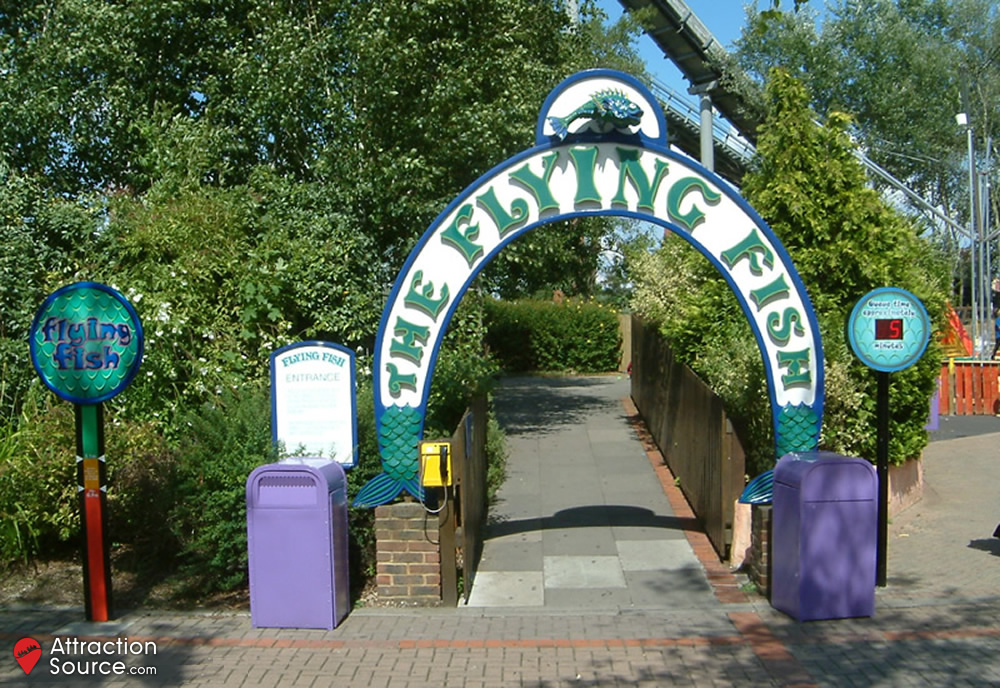 We haven’t forgotten about the many rides & attractions that have left the theme park, whether to make space for new developments or because of planning restrictions. Remind yourself of what once resided at the resort, for some Thorpe Park nostalgia.

I’m a Celebrity… Get Me Out of Here!

This Fairmatt Tri-Star was located in Canada Creek and was replaced by Samurai. The ride was sold to a showman, and could be seen travelling the fairs in the UK and beyond.

A traditional carousel featuring the Thorpe Park Rangers and seating based on classic attractions in the park.

This casual take on a hotel initially opened in 2013 as ‘Crash Pad’, run by an external company called Snoozebox, where shipping containers were converted in to compact rooms. The temporary development was purchased by the park the following year and rebranded as the Thorpe Shark Hotel.

Traditional dodgems situated under a large canopy. When Lost City was introduced in 2001, the attraction was replaced by Zodiac.

Water based dodgems where guests rode in a bumper boat. Nemesis Inferno’s station and volcano now stands on the site.

Located in Lost City, this Fabbri Ferris wheel was installed the same year as Quantum as part of a multi-ride deal. A welcome break from a predominantly thrill-based park, the Resort’s target market at the time meant that ridership was low, leading to the removal and relocation to Chessington where it replaced Samurai. Rush is now located where Eclipse once stood.

In July 2000, a fire broke out at the park and destroyed a number of rides. To compensate, a travelling Huss Enterprise was purchased, which later became Zodiac and themed accordingly.

Originally opening as Space Station Zero, the ride was relocated outdoors in 1990 and given an aquatic theme with beautiful landscaping. It was then relocated again in 2004 to prepare for the construction of Stealth which now stands near the site. The coaster reopened in 2007 and adopted a surfing theme, featuring bright orange trains with individual lap bars instead of a shared restraint between the two riders.

I’m a Celebrity… Get Me Out of Here!

Guests could experience the infamous jungle adventure, including activities such as the Catacombs of Doom, Pipes of Peril and Celebrity Cyclone, all from the hit ITV series of the same name.

Operating at an additional charge, Jungle Escape was an actor-led interactive experience that mixed concepts from escape rooms with the character of the Crystal Maze. Tasked with facing The Huntsman’s challenges, two teams were pitted against each other to collect gems in order to escape the jungle. The attraction offered four practical puzzles within two rooms, and concluded with some actor interaction and an exit via the slide that was also used in the preceding attraction, I’m a Celebrity Get Me Out of Here! Maze.

A collection of miniature 1/36th-scale models of famous buildings and landmarks set amongst beautiful gardens. The attraction originally covered a large area, but was condensed over time to a site where Stealth currently resides.

A relaxing boat ride through the tropical jungle featuring the Thorpe Park Rangers and a grand indoor finale. Nemesis Inferno now stands on the site.

Originally called the Mountbatten Pavilion, the building was one of Europe’s largest single span structures when it opened in 1978. The contents of the dome has varied over the years, with Port Atlantis being our favourite theme. Styled on the mythical underwater city, Port Atlantis featured impressive rockwork around the interior, a large shipwreck, ancient looking grand facades, and nautical themed facilities. All of the theming was removed for the 2019 season without anything replacing it.

Rocky Express was a spinning ride that climbed and dipped around a circular track. The colourful locomotives rotated around a central water tower, along to the tune of an upbeat soundtrack. After more than 30 years of operation, the ride was removed as part of the Project Exodus development.

The intimidating Slammer was one of just two S&S Sky Swat models built, with the other operating at a Six Flags park in the USA. The ride suffered long periods of downtime, and despite maintaining popularity, ran for the last time during the 2016 season.

Thorpe Park introduced the first Mack Rides Powered Coaster model to the UK, enclosing it with an exciting space theme. After six seasons, the park removed the ride from the building in the current Amity area, and relocated it outside next to Model World, naming it Flying Fish.

Thorpe Park’s beautiful paddle steamer was based on a classic Mississippi river boat, and was one of the largest vessels of its type outside the USA. Originally housing a traditional restaurant, the boat later accommodated a Chinese restaurant, corporate events facilities, and finally the Saw Alive scare maze. In typical Merlin fashion, the boat was not given the required maintenance over time, and elements such as the grand chimneys, rear paddles, and upper deck viewing area were removed. The vessel eventually became unsafe to enter, so the scare maze did not return for the 2019 season.

Thunder River was the first Intamin River Rapids ride in the UK, closely followed by Congo River Rapids at Alton Towers. Featuring yellow boats and rockwork around the trough and through the enclosed tunnel section, the ride was later reimagined in to the tropical Rumba Rapids.

Travelling in a wave like motion back and forth, Timber Tug Boat provided thrills for younger guests. After operating for five seasons at Thorpe Park, the ride was relocated to Chessington World of Adventures in order to make way for the Project Exodus development.

Time Voyagers originally opened in 2007 at Gardaland, and was deemed suitable to replace Pirates 4D at Thorpe Park. The space themed adventure film was not as successful, and pulled after just four seasons.

Trapper’s Trail was part of the Fort Ontario attraction, a children’s adventure playground located in Canada Creek. The large lift and first drop of Colossus now stands on the site.

The Waterbuses originally took guests on a trip around Thorpe Park’s various lakes, providing a relaxing alternative to the bustling theme park. When Thorpe Farm was introduced, they served as the primary means of transport to and from the theme park, along with the Canada Creek Railway.

X:\ No Way Out, or later known as just ‘X’, was Thorpe Park’s first major addition for thrill seekers, and was installed to directly compete with the exciting new ride additions introduced at Chessington World of Adventures nearby. Billed as ‘the world’s first and only backwards roller coaster in the dark’, riders would face ‘pre-ride challenges’, along with ‘unique and dramatic concepts in ride technology that made it a world first over and over again’. The ride saw various changes over the years, including the removal of the original computer-based theming which never made much sense. In 2013, the ride was renamed ‘X’ and given a contemporary music theme, with the addition of a soundtrack by Ministry of Sound. This sponsorship would soon be dropped, but the laser and light show during the ride remained until the attraction was closed in preparation for the launch of The Walking Dead: The Ride.