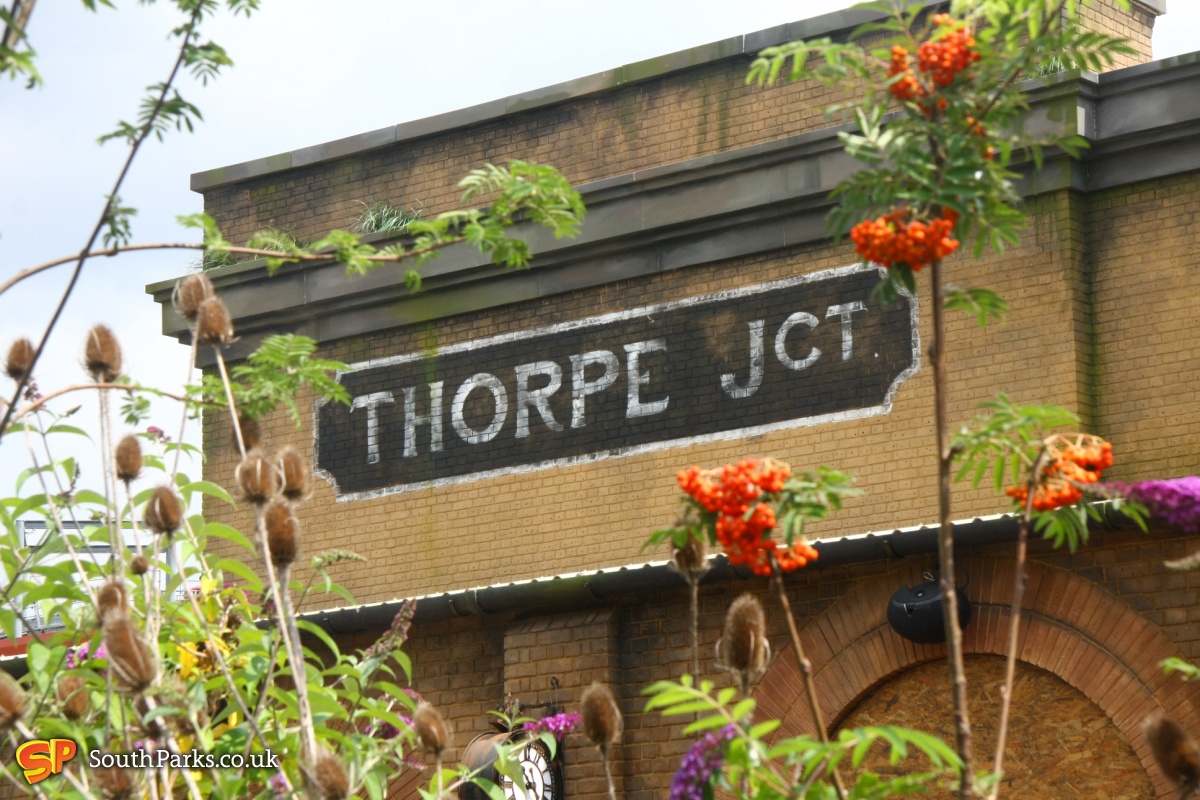 Deeper. Darker. More intense. The demon has risen as Derren Brown’s Ghost Train has been re-vamped for 2017. A 21st Century re-invention of the classic ghost train ride which will make you question where perception ends and reality begin, Derren Brown’s Ghost Train: Rise of the Demon promises to take guests on a journey into the unknown combining both live action and virtual reality. Are you brave enough to face the demon as it rises from below?

A mysterious new development commenced in 2015, with the construction of a new dark ride.

An application submitted in October 2014 revealed Thorpe Park were developing a dark ride for 2016.

Located at the heart of the Island in a disused Victorian warehouse, Derren Brown’s Ghost Train takes guests on a multi-sensory journey which will de-rail their minds and leave them questioning where their perception ends and reality begins. Masterminded by psychological magician Derren Brown, Thorpe Parks Resort’s latest attraction has been over three years in development and involved a team of over 1000 specialists to make Derren Brown’s vision a reality using ‘cutting edge technology’ including HTC Vive Virtual Reality systems, and filming using Nokia Ozo cameras.

As guests approach the attraction they pass through a feature sign leading to a partially covered queue area. Here guests will enter the themed queue line which is split into main, fastrack and disabled queues. The queue line features two photo points, one of which is themed as an ‘infection check point’ giving the first hint as to the storyline of the attraction. Once guests reach the front of the queue they are batched into one of two holding areas. Upon entering the main building guests are presented with a short pre-show featuring a projection of Derren Brown himself, before being directed towards the boarding area. On entering the main warehouse section of the attraction building guest are greeted by a seven tonne Victorian train carriage suspended in mid-air by Iron Chains giving the first indication of the journey which lies ahead. Guests then proceed to the ride vehicle over the first of two metal bridges, with each train capable of holding up to 58 guests. The ride experience features a mix of live action sequences, grand-scale illusions, 4D special effects, and virtual reality technology with guests playing a major part in the action to fully immerse them in the experience as they discover the consequences of Sub Core Energy’s programme of drilling into the Earth’s core. No two journeys on board Derren Brown’s Ghost Train are the same with a range of journeys featuring a range of different characters and, as of the 2017 season, an additional surprise at the end of their journey.

Derren Brown’s Ghost Train is located on the site of the former Arena and Carousel. Over the years the Arena has hosted a wide range of shows from Spiderman to a variety of stunt shows. In 2006 the Arena was used as a temporary home for a succession of the Theme Park’s Fright Nights including Se7en, Experiment 10 and My Bloody Valentine.

In October 2014 plans were submitted for a “first of its kind indoor fully themed attraction’ located on the site of the former Arena and adjacent to X, Nemesis Inferno and Amity Boardwalk. Codenamed “Project Whitechapel” or “WC16” for short, plans detailed a purpose built building with a “warehouse themed appearance”, along with an entrance plaza and feature theming element. Inside the building a distinct ride area was shown with a baggage hold and loading and unloading platform indicating guests would board a ride vehicle of some kind. The plans were approved in the following January, paving the way for construction to begin later on in 2015.

The first signs of construction appeared in spring 2015 and the first foundations for the main building being laid in May. Construction progressed swiftly with the skeleton of the building being erected in August and much of the exterior walls being completed by the end of the main 2015 season in November.

Work continued to progress throughout the closed season with both Thorpe Park Resort and Derren Brown releasing periodic teasers relating to the attraction’s theme until, on Monday 18th January, the Island’s “Dark Secret” was finally revealed.

With the theme park opening for the 2016 season in March, there was plenty of opportunity to see the progress made over the closed season and observe the final stages of preparations to the attraction in the build up to the grand opening, which was announced as May 6th 2016. Throughout March and April a range of theming details were added to the exterior of attraction giving further subtle hints to the theme of the attraction. On Friday 26th March the Ghost Train Shop opened at what would become the exit to the attraction. In-keeping with the overall theme of the attraction, the shop included a number of features where all was not as it seemed, including a rotating wall, and a fortune telling machine, and offered a range of merchandise from your typical t-shirts, hoodies, and pens, to more unique items such as artwork and a levitating train.

However, despite the apparently good progress being made on the attraction, on Wednesday April 27th, less than 10 days before the previously announced opening date of Friday 6th May, THOPRE PARK Resort announced that they were delaying the opening of the attraction. There was no new opening date confirmed with the announcement of the delay with the Resort instead telling people to keep their eyes on social media and the Resort’s website for an announcement of the new opening date and any references to the May 6th date being replaced with ‘Arriving May 2016 – date coming soon’.

As May progressed the final touches appeared to be being made to the exterior of the attraction with queue time boards being installed at the ride entrance, additional signage added to the main, fastrack and disabled queues, and the temporary fencing being replaced with permanent fences around the outside boundaries of the building. Inside the Ghost Train Shop the ride photos were tested in seeming preparation for the opening of the attraction. The Resort also released the official television advert which advertised the attraction as ‘coming end of May’ raising hopes that it would not be long until Derren Brown’s Ghost Train finally took its first passengers. Despite the apparent good progress, on Tuesday 24th May the Resort released another statement on their social media channels stating that once again the attraction would be delayed and this time not giving any clue as to when the ride would open.

On Saturday 18th June the Resort held the first in a number of limited previews, with Shark Hotel and other invited guests being some of the first to experience the attracti