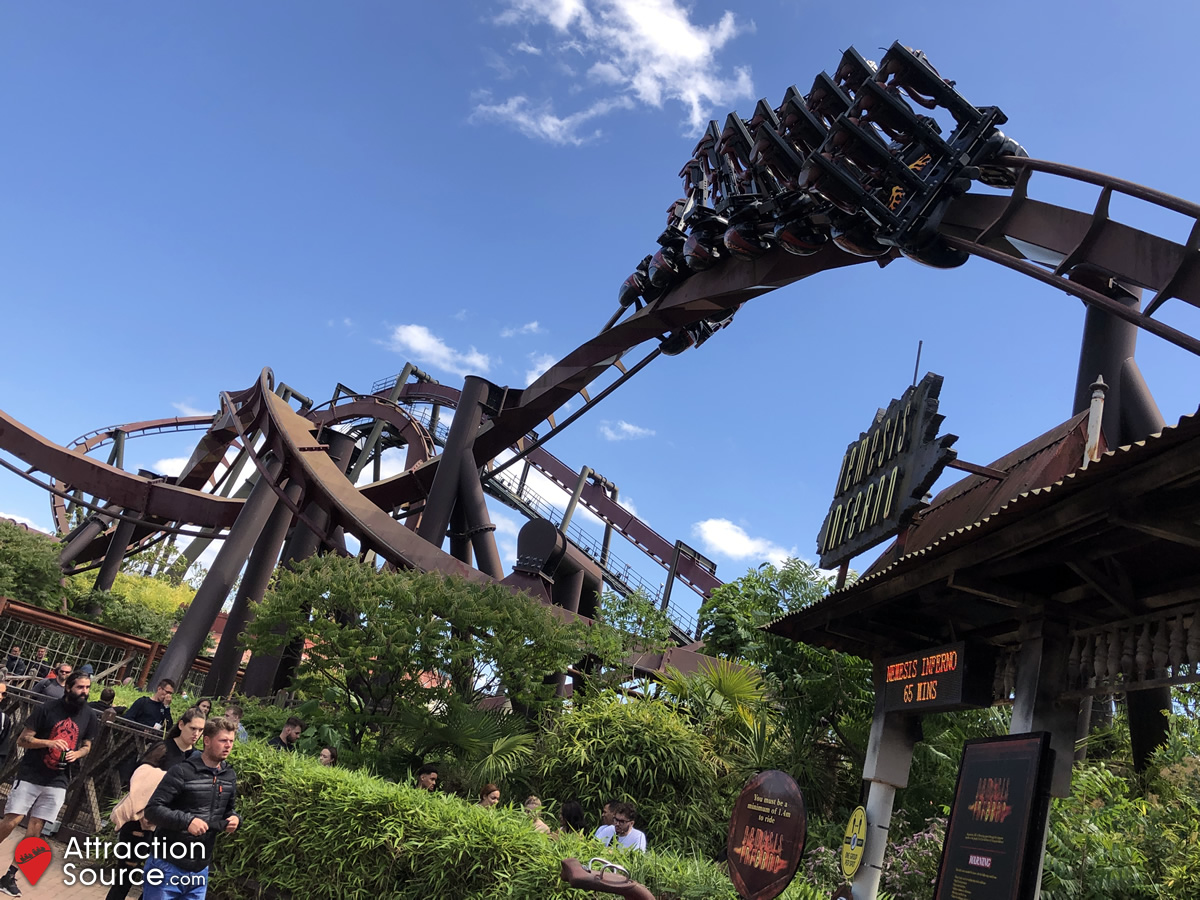 A mix and match selection of attractions, The Jungle contains the thrilling roller coaster Nemesis Inferno, the calming Rumba Rapids, and, not to forget, the unmissable Mr Monkey’s Banana Ride!

Following hot on the heels of Colossus, Nemesis Inferno was the second high-thrill roller coaster to be built within the space of two years at Thorpe Park. The park’s first Bolliger and Mabillard roller coaster, this inverted coaster draws inspiration from its sister Nemesis at Alton Towers, packing a number of thrilling components within a tight ride area. Starting inside the large active volcano, riders drop out of the station and back into the steaming volcano during a unique pre-lift segment. Climbing 95ft, the ride traverses a steep curving drop into a vertical loop, zero-g roll, 180° swooping turn, interlocking corkscrews and a figure of eight double helix finale. The coaster interacts with the pathways and theming below, immersing both riders and spectators alike.

Originally called Thunder River and opening in 1987, Rumba Rapids remains a popular family water ride. Whilst being tamer than its original form, the attraction maintains the ability to soak riders, albeit with less consistency and frequency than in its earlier days. Seating eight people, the rafts follow a river that has a variety of calm stretches and turbulent rapids, along with a large indoor waterfall and an open wave pool area where boats can pass each other. The final wave pool also provides an excellent view for bystanders, who can watch the excitement of the ride and perhaps an unlucky rider getting soaked by a wave.

Mr Monkey’s Banana Ride is a swinging ship attraction themed around a giant banana. Whilst the Mr Monkey statue that used to sit above the structure has been removed, the ride maintains a charming theme due to the surrounding tropical foliage and an original voice over from Mr Monkey himself. Being one of the park’s more gentle rides, it is popular with younger guests and frequently has a minimal wait time.

11491 false false false
Page load link
Manage Cookie Consent
To provide the best experiences, we use technologies like cookies to store and/or access device information. Consenting to these technologies will allow us to process data such as browsing behaviour or unique IDs on this site. Not consenting or withdrawing consent, may adversely affect certain features and functions.
Manage options Manage services Manage vendors Read more about these purposes
View preferences
{title} {title} {title}
Go to Top