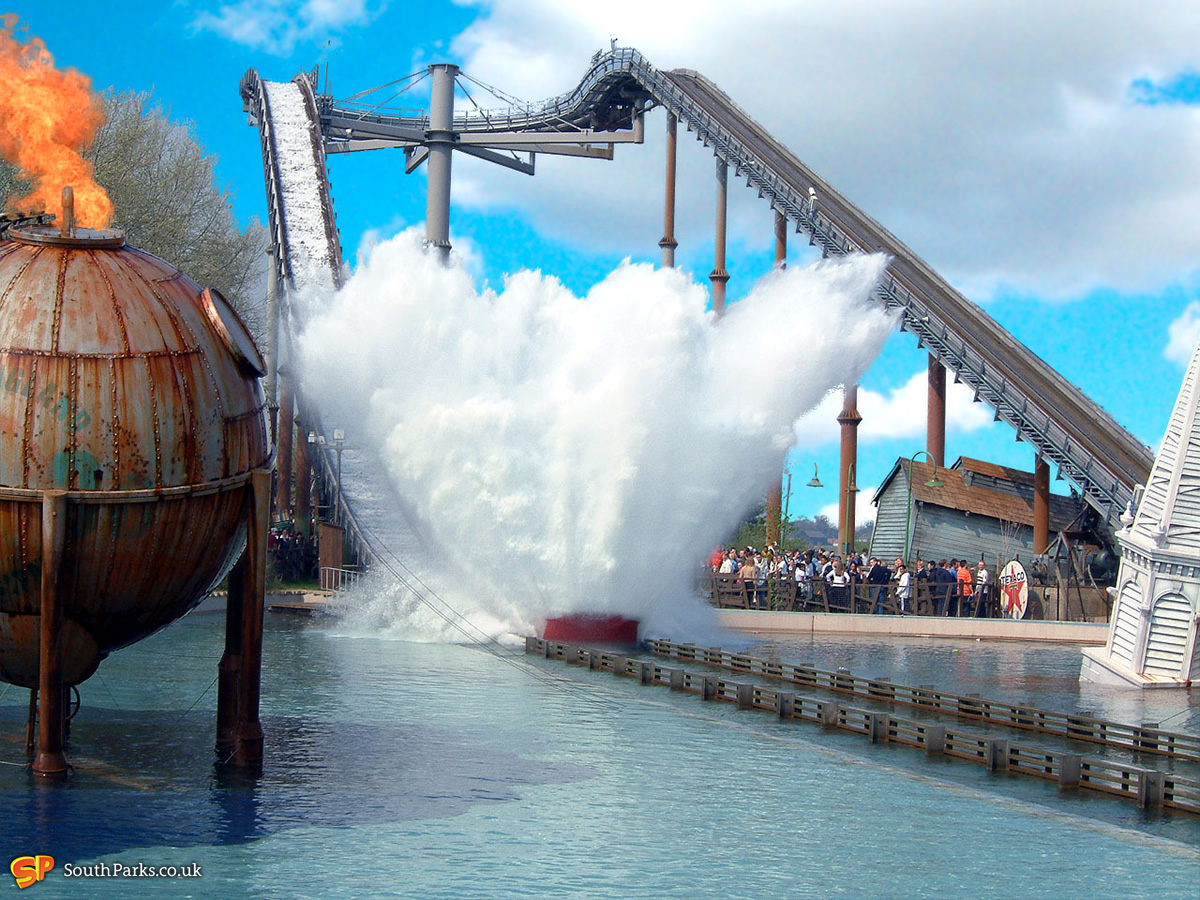 With the the big yellow submarine on-top of Depth Charge, an enormous wave generated by Tidal Wave and the giant tower of Stealth, everything has a humongous presence in this area of the theme park.

Storm in a Teacup

Towering at 205ft, Stealth is one of the first landmarks that guests will see when travelling to the park. Boasting the world’s 4th fastest launch acceleration of any roller coaster, riders rocket from 0-80mph in just over 2 seconds. As the track rises into a 90° climb, riders are exposed to forces of 4.5g, which then reduces as the apex of the top hat approaches where significant airtime is experienced. Rotating back down into a 90° twist and drop, the return to ground level is as thrilling as the upward journey. A brief amount of airtime is felt on the following hill, before braking hard on the approach to the station. Whilst the core ride experience only lasts a few seconds, it’s an attraction that many will want to ride time-and-time again.

Located in a traditional New England fishing village, Tidal Wave is the tallest and wettest water ride in the UK. Riders live through the feeling of a tsunami by boarding a boat that plunges down an 85ft drop, hitting the splash pool below where a giant wave is created over 60ft high. Don’t miss the quirky queue line features, and be cautious as you exit the station, another wave can hit!

A ride type more frequently seen in water parks, Storm Surge has the capability of drenching riders through its hidden water sprays and not-so-hidden final waterfall. Climbing up the lift hill in the inflatable boat provides a relaxing experience and a superb view across the park. Coming back down leads to plenty of spinning, splashes and laughter.

The giant yellow submarine sat atop Depth Charge highlights the playful summertime feeling of this ride. Climbing four stories, the queue leads guests to the top of the four lane slide, where they climb aboard a rubber dinghy. When it’s time to ride, all four dinghies are raised automatically to start their journey down the slide. With two moments of airtime, riders cling on to the sides of their dinghy until they reach the bottom and slide across the braking mat, enjoying the cooling water spray.

Formerly the park’s most thrilling attraction in the early years, Flying Fish is now more frequently ridden by younger guests. Utilising the same powered roller coaster ride system as its neighbour at Chessington World of Adventures, riders speed through several laps of the intertwining figure-of-eight layout.

Storm in a Teacup

A classic teacup ride, Storm in a Teacup is one of the park’s oldest attractions having opened in 1985. Sitting in a giant teacup, guests rotate the central wheel to spin freely for the duration of the ride.

Bouncing gently up-and-down, and providing a nice view across Storm Surge and the rest of Amity, High Striker is a great ride for young thrill seekers. The ride was relocated to Amity from Old Town, where it had operated from 2017-2021 as Lumber Jump, before making way for the Project Exodus development.

It’s only natural for an island to have its own beach, although you wouldn’t expect to find it located in the middle of the park! Open during the summer months, guests can relax on the golden sand and splash about in the calm water.

Opened: 1989 | Manufacturer: N.V Aquatic | Height Restriction: 1.1m* | Ride Photos? No | Fastrack? No
*Applies to the blue and green slides of Wet Wet Wet. Anyone under 1.1m must be accompanied by someone 16 yrs or over.

Situated behind Stealth, the Sunken Garden provides the perfect place to escape the bustling excitement of the theme park. Featuring beautiful flowers, shrubs and trees, a trellis walkway surrounds a picturesque pond and waterfall.