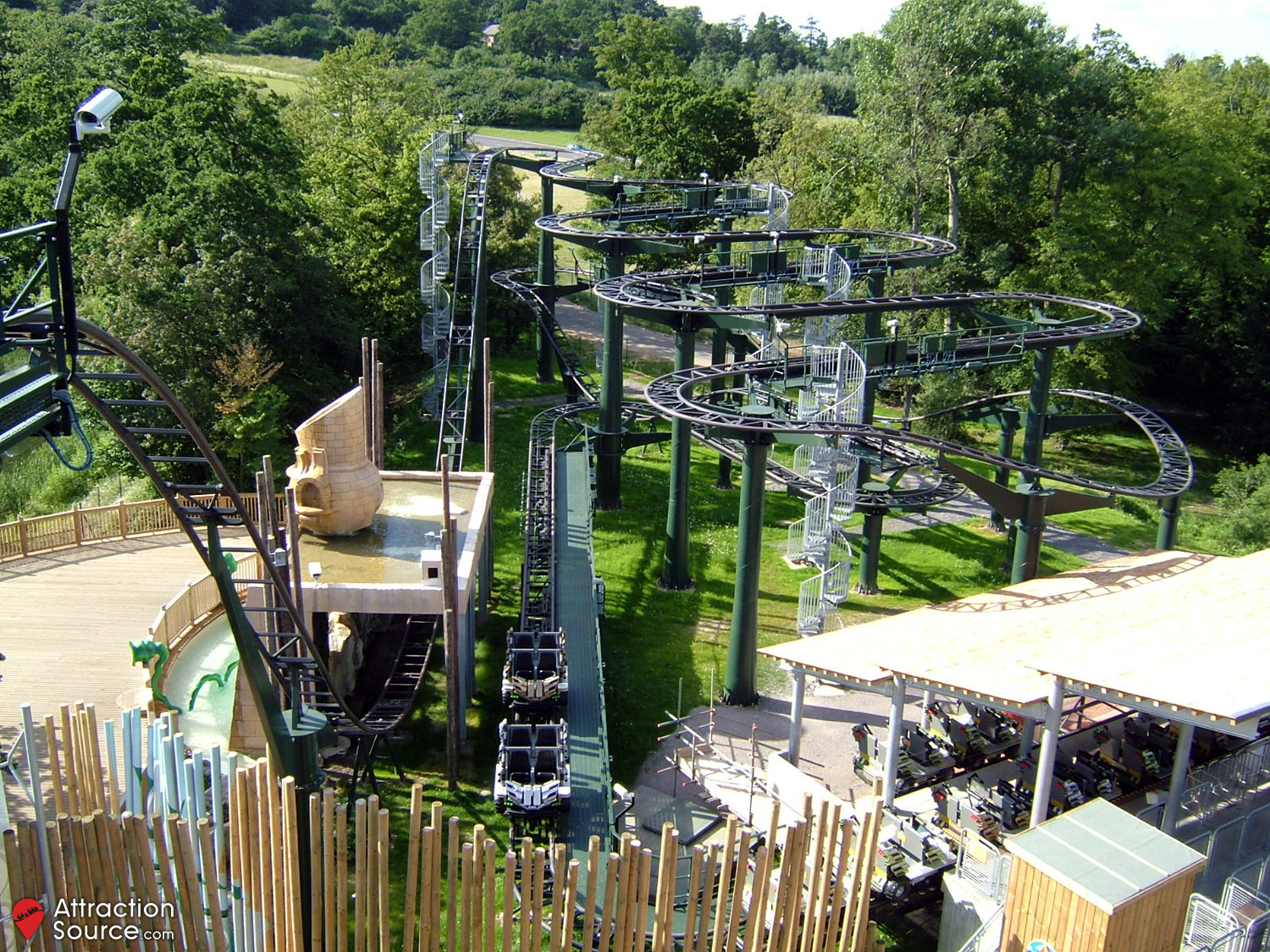 Situated next to the lake, at the furthest point of Legoland Windsor Resort, Jungle Coaster was a short-lived Wild Mouse coaster model from Mack Rides.

In 2003, rumours began to emerge that the park would receive a new attraction for young thrill seekers that would complement The Dragon. Due to the popularity of X-treme Racers at Legoland Billund, it was an obvious choice to install the same ride model at the British park too.

Initially two themes were considered, with the first being based on Lego’s Drome Racers brand. However, as the coaster would be situated next to Adventure Land, it was eventually decided to integrate the new ride into the area with a generic jungle theme, which was more sympathetic to the attractions nearby. 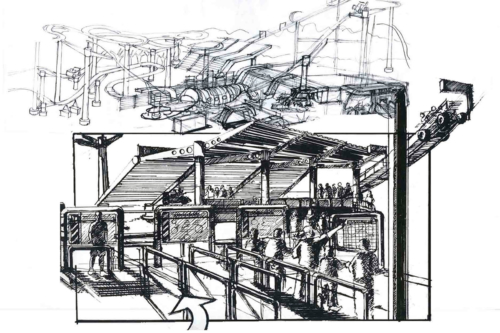 The concept art for Jungle Coaster is quite detailed, and although the majority of the plans came to fruition, there are a few elements such as the timber walkway and vast amount of palm trees which didn’t feature in the final product.

A common element in both concepts was the large structure that the trains would pass through at the base of the first drop. In the Drome Racers version, the structure was a contemporary looking tunnel, constructed from metal and rock work with various portholes and grills.

The final tunnel design for Jungle Coaster was named the ‘Anger of Tllaloc’ – a temple structure with cascading waterfalls either side of a large effigy, along with interactive elements where guests could use voice synthesisers and set off water bombs to ‘arouse the anger of Tllaloc’. Other theming features in the area included various Lego models of exotic creatures, imposing painted murals, tropical shrubbery and the coaster trains designed to imitate the look of vehicles featured in the Lego Racers brand.

Land clearing and construction for the attraction started in late 2003, with the ride being built over the winter ready for the new season. Follow the progress of construction in our gallery below.

Jungle Coaster opened in March 2004 and became the park’s most thrilling attraction. Known for its wild drops and hairpin turns, the ride was an immediate success with families, teenagers, and children that could meet the 1.1 metre height requirement. Although guest feedback about the attraction was positive, there were various factors that led to its eventual demise.

It was not uncommon for large queues of at least an hour to form, and as the basic switchback queue featured little shading, guests were left feeling frustrated. Seatbelts were added to the ride vehicles after opening as a stipulation by the Health & Safety Executive, which reduced the hourly throughput causing even longer waits.

By far the biggest issue the ride faced was the noise complaints of local residents regarding the continuous screams of riders. After four seasons, the park was forced to add covers to the vehicles, which reduced the capacity even further to a maximum of two adults per car, and decreased the enjoyment of the experience dramatically. At the end of the 2009 season, Jungle Coaster closed for good, with the relevant land designated as the site of the Legoland Resort Hotel which opened in 2012.

After just five seasons, Jungle Coaster was a loss to the park’s line up for young thrill seekers which has yet to be compensated.

Enjoy the following exclusive photos of the former attraction which we hope will bring back some fond memories. You are still able to enjoy Jungle Coaster in a more exotic environment, as the ride was relocated to Legoland Florida Resort and now named The Great Lego Race, as shown in the last photo below.

Page load link
Manage Cookie Consent
To provide the best experiences, we use technologies like cookies to store and/or access device information. Consenting to these technologies will allow us to process data such as browsing behaviour or unique IDs on this site. Not consenting or withdrawing consent, may adversely affect certain features and functions.
Manage options Manage services Manage vendors Read more about these purposes
View preferences
{title} {title} {title}
Go to Top