Thorpe Park Resort Announce ‘A Season of Experiences Like No Other’

Thorpe Park Resort Announce ‘A Season of Experiences Like No Other’

Following a series of cryptic teasers on their social media channels, Thorpe Park Resort have announced ‘A season of experiences like no other’ for 2019.

Starting from 6th April, the Island will host a series of events and experiences throughout 2019. First to arrive at the Resort will be GAME FX powered by HYPD! from 6th April to 31st May. Included with park entry, guests will be able to book a time slot to experience the gaming extravaganza which will be held in the Lakeview Marquee. Guests can watch gamers battle it out in the live-streaming arena or pay a visit to the retro gaming lounge where you can immerse yourself in nostalgia. There will also be the chance to try out some of the latest virtual reality technology. Those wanting to experience the event will need to book a timeslot in advance with each timeslot offering 45 minutes of gameplay. Selected games will have an age advisory of 12 or over, whilst some of the VR experiences will carry an additional cost.

Opening in May, Jungle Escape will be a live adventure which will challenge guests to decode the clues and endure the hunt as you try to escape. This new escape experience looks likely to replace the I’m a Celebrity: Get Me Out of Here! Maze, which closed for the final time at the end of last summer. The experience will carry an additional charge however it is yet to be confirmed exactly how much this will be.

From 25th May until 8th September, BounceZilla will be bouncing onto the Island. The 96m inflatable assault course will provide a fun challenge for guests willing to take on the course. It is not yet known where the course will be located, or if there will be an additional charge to take part.

FRIGHT NIGHTS will be returning once again to bring the 2019 season to a close, and this year sees the event run for the greatest number of nights yet with the event running on selected dates from 28th September to 3rd November. There are no hints yet as to exactly which mazes will be returning, however The Walking Dead: Living Nightmare has been listed as an attraction on the Resort’s phone app suggesting it may open during the season prior to FRIGHT NIGHTS. Many fans of the event will also be hoping for THE BIG TOP to make a comeback as a full scare maze rather than the roaming actors from 2018’s event. 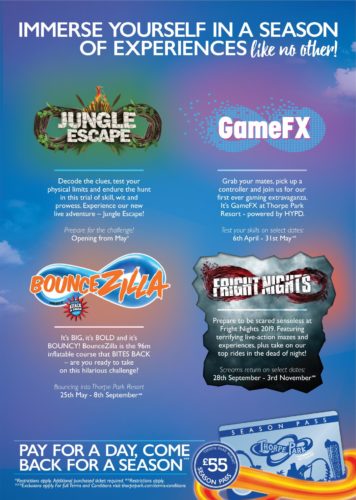 Reaction to the announcement of this year of events has been mixed, with many dismayed that the Resort are not introducing a new ride for the 2019 season, especially with the recent confirmation that Logger’s Leap has been officially retired. Some are also disappointed that Jungle Escape will be an upcharge experience, especially as it will be replacing the free to enter, I’m a Celebrity: Get Me Out of Here! Maze. However, others have taken a more positive view, with some pleased that 2019 will see a lighter tone in comparison to 2018’s Year of The Walking Dead.

What are your thoughts on the recent announcement from Thorpe Park Resort? Will you be heading to the Island to experience any of the events? Make sure you have your say over on the Attraction Source Forum.