The second round of public consultations for the proposed London Paramount Resort has taken place this month, with a series of events taking place across Kent providing a range of new details about the proposed development on the Swanscombe peninsular.

As part of the consultation a selection of new images has been released revealing more details of the planned attractions for the resort. Amongst the proposals are plans for attractions based on some of Paramount’s most famous film franchises including Mission Impossible, The Italian Job and Star Trek. Alongside these iconic brands London Resort Company Holdings, the company behind the development, have revealed that Paramount London will also feature British films alongside Hollywood blockbusters, with the directors being clear that they want the resort to have a British identity as well.

Once completed, the proposed theme park will boast over 50 rides and attractions including: twelve major rides, family rides, water rides, adrenaline rides, and signature entertainment shows and cultural events – some of which will take place in a central plaza area. The current master plan suggests the resort will consist of multiple zones: Adventure Isle, Land of Legends, Cartoon Circus, Starfleet Command, Action Square, Port Paramount, and Entertainment City all of which will utilise state of the art technology to shorten queues and maximise the visitor experience. A 2000 seat theatre hosting ‘West End Quality’ shows, 11000sqm of exhibition space, and a cinema and comedy venue will also be included within the core are of the entertainment resort. As the resort develops, it is anticipated that further attractions will be added with an area for potential future expansion clearly indicated on plans. Alongside the theme park the resort will also feature the largest indoor waterpark in Europe, an entertainment street, events space, training academy, sports facilities and 5000 hotel rooms. 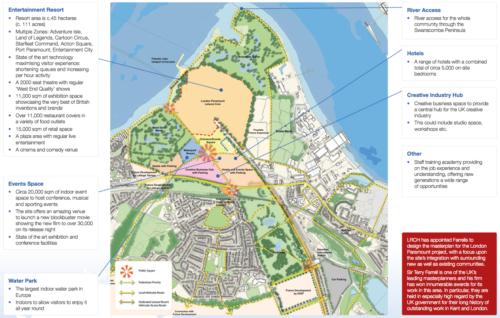 Also on display at the consultation was the revised timetable for the construction of the resort, now set to open for Easter 2020, and plans for the new transport system around the resort including a direct access road from the A2 to help avoid congestion in the local area. With an estimated 15 million visitors a year – 50,000 visiting on a typical day – transport has become one of the key concerns for local residents. It is currently estimated that the resort would increase traffic levels by 12%. To try and help counteract this, it has been suggested that the opening times will be managed to help avoid peak travelling times. Proposals to maximise rail links and utilise the River Thames have also been put forward to try and help encourage guests to travel to the resort using alternative methods, therefore reducing the impact on the road network.

Amongst the other benefits of London Paramount Resort will be the creation of 27000 new jobs, opportunities for local companies to be involved in the construction and supply chain of the resort, partnerships with other local tourist attractions, retention of existing and the creation of new habitats for wildlife around the site, and a commitment to work with local education providers to help develop the skills of local people.

What are your thoughts on the latest details to be released for London Paramount? Why not discuss your ideas over on the Attraction Source Forum.