London Resort Company Holdings have this week withdrawn the DCO application for The London Resort which was submitted on 31st December 2020.

“In the best interests of the London Resort, we are withdrawing the current application; as a result of the classification of Tilbury as a Freeport which has meant revisions are required in moving the ferry terminal from Tilbury to Grays. We are working closely and collaborating with Thurrock Council on that matter.

“This issue, combined with the decision by Natural England to designate a brownfield contaminated site as a SSSI has impacted the project. We in turn have acquired significant land holdings as part of our mitigation strategy combined with our commitment to spend £150m on environmental improvements on the peninsula. These changes are considered material and as such require withdrawal and resubmission.

“We have repeatedly petitioned for latitude, extensions of time and of course understanding from the Examining Authority and the Planning Inspectorate. Their teams have been extremely supportive, but we recognise that the best route for the Project is through withdrawal and resubmission of a fresh DCO application within this calendar year.

“We will continue our engagement with the local community, statutory bodies, landowners and others to make sure we can reach as many agreements as possible before resubmission. Make no mistake we are still 100% committed to this amazing project and we will resubmit before the end of 2022 and look forward to delivering a world class entertainment resort – the UK deserves better and we will make it happen!”

Withdrawal of the application came just ahead of the Preliminary Meeting commencing, with this due to take place on 29th and 30th March. The Examining Authority had decided to proceed with the Preliminary Meeting in March, despite LRCH’s proposal to defer this until July, since further delay could not be supported by any substantive evidence of progress to date or any detailed work programme to utilise the remaining time if such an extension was given.

This decision followed a consultation with Interested Parties and Affected Persons to assess the justification for any such delay, where common themes to emerge from statutory bodies and those with responsibilities in the fields of traffic, transport, shipping, ports, water utilities and the natural environment were that LRCH had fallen behind previous indications of progress or targets for planned work to prepare for the Examination and that little, if any, recent engagement had occurred between them and LRCH. Respondents with interests in the compulsory acquisition process equally reported a very low level of engagement and that requests to address concerns about the adverse effects of compulsory acquisition proposals on businesses had not been practically addressed. The Examining Authority have noted that these parties may be able to seek awards of costs from LRCH, such as for wasted preparatory work.

Two key factors are cited by LRCH as having driven the decision to now withdraw the application. The first is to revise the transport strategy to relocate the proposed ferry terminal from Tilbury (an area further to the east, on the opposite side of the River Thames) to Grays (which is directly opposite the Swanscombe Peninsula, the proposed site of The London Resort). Thurrock Council have recently confirmed that they are working with LRCH to develop a direct ferry link between Grays and The London Resort. The second factor is the designation of the area as a Site of Special Scentific Interest (SSSI), which was notified by Natural England in March 2021 and confirmed in November 2021. This was subsequent to the submission of the application at the end of 2020, so the additional environmental implications this presented were not fully addressed by what had been submitted.

Although LRCH maintain that they are committed to the project, intending to resubmit the application before the end of the year, doubts about its future are seemingly now at their highest level to date. Local opposition to the proposals has continued to build, with local MP Gareth Johnson publicly withdrawing support for the project in recent weeks, alongside growing frustration from key stakeholders relevant to the infrastructure required for the Resort at the lack of engagement with them by LRCH. A restructure of the Executive Board was also recently announced, with Abdulla Al Humaidi and Ayman Chit (CEO and CFO of Kuwaiti European Holding Group respectively, the main financial backer of the project throughout the planning phase) departing following a corporate governance review ahead of claimed significant upcoming institutional capital investment. They have been replaced by Frank Baker CMG OBE, a former diplomat, and Ahmed Al Aiban, an individual with a professional services background in the Middle East.

What do you think this will mean for the future of The London Resort? Let us know your thoughts via the Attraction Source social media channels.

DCO Application for The London Resort accepted for examination

DCO Application for The London Resort accepted for examination 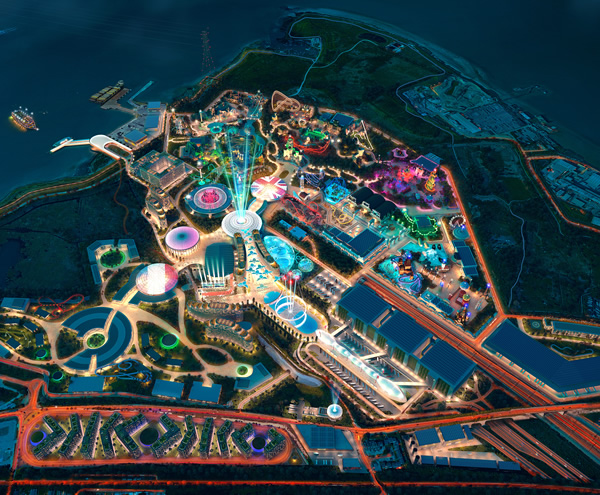