Throughout the consultation and construction period, Attraction Source will be bringing you the latest news and information on what is set to be one of the largest developments the UK leisure industry has ever seen. We have summarised what we know so far into this helpful guide, and will be keeping it up to date with all the latest news and developments surrounding the project.

The planning application was submitted to the Secretary of State in December 2020, and approved for review in January 2021. If successful, the current anticipated opening date is during 2024. 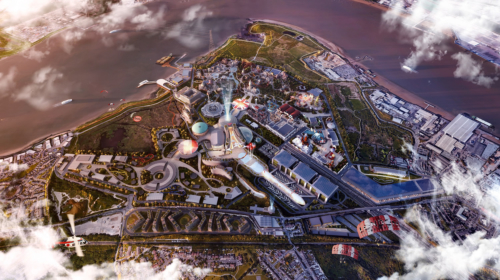 Set to be located on the Swanscombe Peninsula in Kent, the proposed complex will feature a whole range of facilities including a theme park, water park, entertainment district, and hotel accommodation. Originally announced in October 2012, the project made steady progress towards the submission of a special type of planning application called a Development Consent Order (DCO), which took place in December 2020. If approved, it is anticipated that construction would begin shortly after development consent is granted, paving the way for a potential opening date during 2024.

Once completed, the proposed theme park will boast over 50 rides and attractions based upon popular film and television shows. With agreements in place with Paramount Pictures, BBC Worldwide, and ITV Studios, developers have a wide catalogue of intellectual properties to choose from.  Developers have also formed a partnership with the British Film Institute (BFI) who will provide strategic input on how the project can best incorporate British film and talent into the new entertainment resort. The BFI will ensure that the UK’s film industry will play a central role across the resort’s attractions, building on already well-known brands, and helping British cinema reach new, international audiences. Set within a number of themed areas, so far developers have confirmed there will be up to twelve major rides, family attractions, water rides, adrenaline rides, and signature entertainment shows and cultural events.

The London Resort will be the first European development of its kind to be built from scratch since the opening of Disneyland Paris in 1992 and is being billed as one of the most ambitious theme park projects ever in Europe. Eventually, it will become a two-park resort with the first gate opening in 2024, and the second gate opening within five years. It is anticipated that around 60-70% of the attractions will be undercover.

The project will bring significant benefits to the local area, regenerating a brownfield site twice the size of the Queen Elizabeth Olympic Park, and sustaining approximately 33,000 local jobs through both direct employment on site and via the supply chain associated with the resort. Developers have also promised substantial investment in the transport infrastructure surrounding the resort with a new 4 lane dual carriageway connecting the resort to the existing A2, and the introduction of transport options utilising the River Thames.

In May 2014 the project was given a significant boost, gaining special status as a Nationally Significant Infrastructure Project (NSIP) as a project that could have a ‘significant economic impact on a wider area than a single local authority’. This means that London Resort Company Holdings, the group behind the project, can apply directly to the Secretary of State for planning permission as opposed to the usual route through the local authority. The full formal planning application was submitted in December 2020 following a final round of public consultations, and approved for review in January 2021.

With predicted visitor figures of 15 million people a year, the new multi-billion pound development will represent significant competition for the current UK theme park and tourist attractions, in particular Merlin’s southern theme park resorts: Thorpe Park Resort, Chessington World of Adventures Resort and Legoland Windsor Resort. It is yet to be seen how the existing attractions will adapt to compete with this new landmark addition.

In April 2021, The London Resort shared details of the first area of the theme park. Base Camp – the world’s first prehistoric nature reserve, will be located in the north west corner of the Resort. Plans for Base Camp include two rollercoasters, a large multi-media live stage show experience, an advanced simulator attraction, immersive fine dining and an ‘active dig site’ where younger palaeontologists can discover dinosaurs as they climb, dig and tunnel their way across an excavation site.

The first of two rollercoasters planned for the land will celebrate the reign of Quetzalcoatlus, one of the largest known, winged reptiles of all time. Set over 1km of track, it aims to be one of the fastest coasters in Europe. It will also go against the trend of building coasters with towering heights and big drops. Recreating what scientists believe was a typical flight path of the extraordinary beast, this coaster will stay low to the ground, zipping across treetops, skimming water and bursting through rocky canyons. A multi-launch coaster reaching speeds in excess of 70mph, the ride will replicate the hunting speed of Quetzalcoatlus which would swoop low and fast to snare prey in its long, tweezer like beak. The second coaster inside Base Camp will offer a family orientated experience. Weaving beneath the flight path of Quetzalcoatlus, through the fascinating landscape, this ride will allow for adventurers of all ages and sizes to experience a rollercoaster with just the right level of thrill.

Situated at the edge of an underwater cliff, a luxury dining venue will combine first-rate cuisine, fine wines, with a view to die for. Floor-to-ceiling windows will wrap the dining room, offering guests a front-row seat to the flora and fauna of the prehistoric oceans just beyond the glass. Throughout the meal, schools of ancient fish may swim past the windows, darting from predators as they emerge from the inky blackness beyond. At regular intervals, something with a bit more bite may come into view. Ichthyosaurs loves to feed at this depth, and diners will have an unobstructed view as fish, otherwise assumed to be the hunters, become the hunted beneath the ocean’s surface.