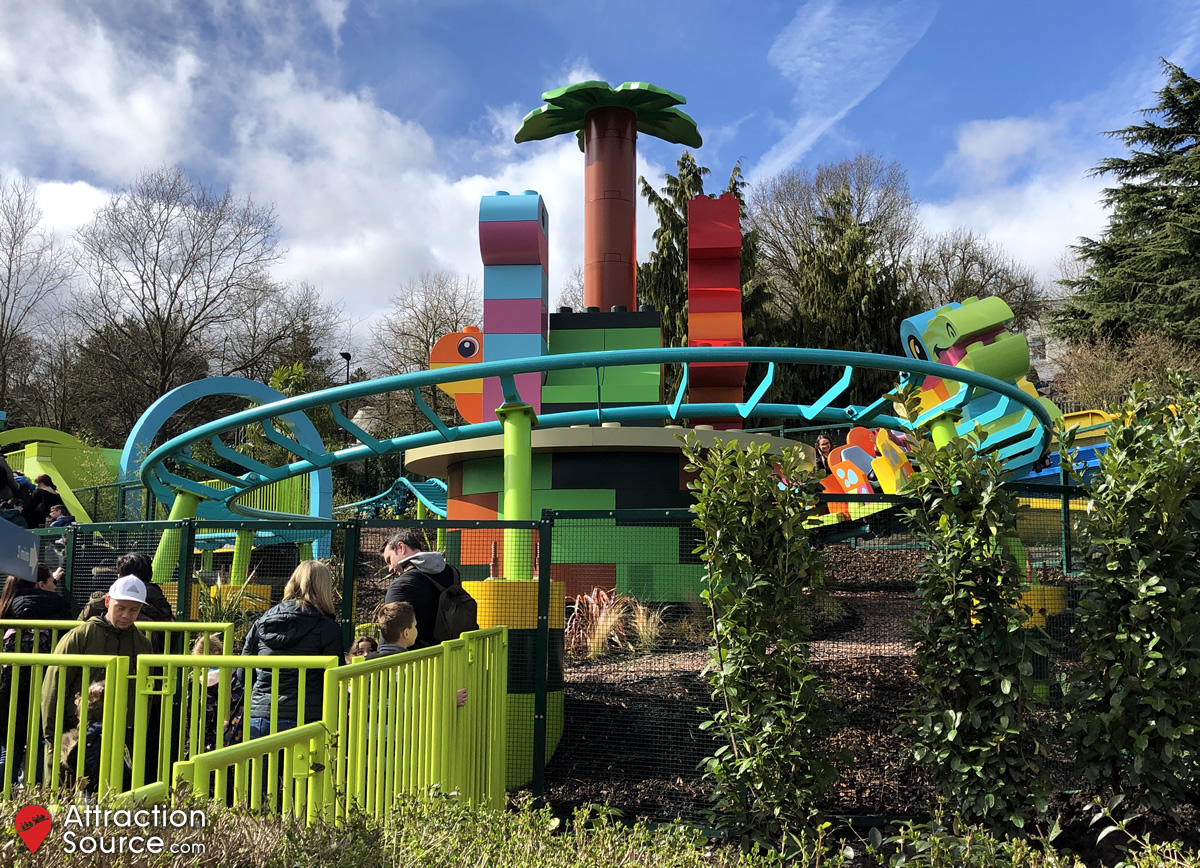 This colourful land is targeted at the Resort’s youngest guests, featuring a range of rides, a splashtastic water play area and even a junior rollercoaster for those looking to get their first taste of thrills.

Climb aboard a DUPLO brick dinosaur on this ride which provides the perfect first rollercoaster experience. What’s more, unlike most larger rollercoasters, guests get to go round the circuit twice! The train travels around a simple, oval-shaped layout, which has a rotating island of DUPLO dinosaurs at one end.

Enjoy a magical boat trip through a fairy-tale forest where guests can expect to encounter a number of well-known characters. The journey first takes guests past the houses of the Three Little Pigs as the Big Bad Wolf tries to blow them down, before moving onwards past Sleeping Beauty and Hansel and Gretel. Next on the route is Snow White and the Seven Dwarves, followed by Cinderella who shall go to the ball after the Fairy Godmother works her magic! The boat then travels through a cave where Aladdin has released the Genie from the magic lamp, past Goldilocks and the Three Bears, and finally Little Red Riding Hood discovering the wolf in her grandmother’s house, before the woodcutter chases it off.

Opened: 1996 | Manufacturer: WGH Transportation | Height Restriction: N/A | Ride Photos? Yes | Reserve & Ride? Yes
*Anyone under 1.3m must be accompanied by someone 16 years or over.

Guests can take control of their very own DUPLO helicopter, with each coming equipped with a lever that can be used to guide the vehicle up and down on its rotating podium. The attraction was originally called Whirly Birds when it opened in 1996, then renamed to Chopper Squadron in 2006, before finally getting its current name in 2013.

Take a seat in one of the carriages of this miniature train, and enjoy two gentle laps around the oval-shaped circuit.

This interactive play area has a range of structures including a fire station, police station and princess castle. 2020 also saw the addition of a more out-of-this-world element with the installation of a rocket play structure.

This water play area has a range of activities and structures for all ages. Splash Safari is more targeted at toddlers, with a range of water-squirting DUPLO animal figures from lions to giraffes. For bigger kids, Drench Towers features a number of water-slides and of course waiting at its top is a giant tipping bucket which periodically dumps water onto anyone standing below! Changing rooms are located nearby for use by guests who want to enjoy the area.