Scares return for 2021 at Screamfest Resurrected

Home/Scares return for 2021 at Screamfest Resurrected

Scares return for 2021 at Screamfest Resurrected

Last weekend signalled the return of Screamfest, a popular, must-experience Halloween event in the Staffordshire Moorlands. Well and truly “Resurrected” after a year’s absence due to COVID-19, the event features a line-up that includes some fresh twists on Screamfest classics, returning scares, and two new attractions. Attraction Source was invited to the preview event on Thursday 14th October to experience everything the event has to offer.

Creed Farm is new for 2021 and is the latest Screamfest twist on a corn maze, replacing the previous incarnation, Dia De Los Muertos. Run by Butcher Bill, this farm holds some terrible secrets, so while you may believe you have come for a tour of the meat factory and the chance to buy some of the highest quality produce around, guests are in for a shock when they realise they are about to become the product itself. At the start of the tour you are told the backstory of Creed Farm, before being sent along your way. However, unlike previous years, this corn maze doesn’t start with a trip on the back of a tractor. Instead, you are sent down a pitch black tunnel with only a rope to find your way through, with figures lurking in the darkness leaving you questioning what or who will be coming for you. As you finally get out into the farm’s corn field, you slowly realise this is going to be anything but a normal tour. The fantastic cast bring to life characters from the farm’s family, who tell a story as you venture through the five stages of meat processing.

This maze has a great balance between actor dialogue and scares to keep your heart beating. There are also some fantastic costumes in this maze, in-particular the hessian sack family members who have very little to say but will have you running through the corn – their movements will really take you off guard. This maze is a welcome new addition to this year’s line-up, with the theme better-suiting a corn maze than, and a vast improvement on, that of its predecessors.

Returning this year, and celebrating its second anniversary, is the best day out in the south – Hillbilly Joe’s Zombee Zoo. While this is a whacky comedic take on the traditional zombie attraction, don’t let this fool you as this maze is full of scares. As a zoo, you really do encounter all different breeds of zombie creatures, with each enclosure holding a different theme, leaving you wondering which type of beast you will encounter next. Throughout the maze you’re also met by different members of Joe’s family who will guide you through. Don’t be fooled, as they are not as friendly as they seem…

The scares and comedy balance well throughout, and, with no two enclosures the same, you’re never quite sure where the scares are coming from next. The varied costumes that feature give you something to behold, from a Santa zombie to an aubergine emoji zombie. We have to give a special shout out to Grandma who provided the biggest laughs and gave us the privilege of taking a trip down her back passage. It’s safe to say this maze is up there with some of the best we have experienced this year, and is certainly not one to be missed.

Embracing a new name this year is Freakout On Tour. A resurrected version of an existing attraction, this maze features a new storyline, new scenes and some aspects of the original experience all bundled into what could be mistaken for a brand-new attraction. Within a new urban industrial setting, contrasting to the original bright neon environment it once was, you find yourself as part of a group invited to take part in an illegal rave at what used to be the clowns’ playground. However, just as the power comes on you’ll soon discover the clowns haven’t abandoned it yet.

As you look to find your way whilst out avoiding the murderous clowns and circus folk, the pace builds to become increasingly chaotic – you won’t be sure where they will appear from next. Featuring interesting characters, impressive make-up and costumes, this maze really is a hit on all the senses. Unlike most attractions, this one really does take the name of a scare maze literally, as the clowns toy with you as you attempt to navigate dead ends, loops and a really disorientating mirror maze full of scares. This is a fine example of how to bring a new lease of life to a fan favourite.

The final scare maze welcomes you to the Diced Heart pub, to join one of Professor Heart’s famous speed dating nights, where you will find out Love Hurts. With an immersive external façade and impressively detailed sets throughout, Love Hurts is definitely one of the strongest mazes at Screamfest. As you journey through the professor’s five tests of love, you’ll meet plenty of his rejections who aren’t destined to find romance, but are instead there to terrify and torture you.

This maze certainly keeps your heart pumping, using different floor surfaces, a combination of varied wide-open sets and tight tunnels that force you to duck down, meaning you never know what the professor has in store for you or which of his tortured rejections you will encounter next. Eventually you reach what is a unique finale that provides a strong ending to the maze, where you meet your blind date for the evening, which is none other than Professor Heart himself – unfortunately for you it’s your heart he wants… literally! The actors within this maze were full of energy and really conveyed their characters well, which made the experience both thrilling and intense. Unlike some other mazes in the industry, the story is told from start to finish through actor-delivered monologues and attraction audio.

Also new for 2021 is Le Theatre Noir. Very little was known about this new attraction prior to opening weekend, and many were unsure what to expect from the Sisters of Death, who travel in the storm clouds, and their ritual of the soul. Unlike the rest of the attractions at this year’s event, Le Theatre Noir is a sit-down style scare show. Although it adds some variety to the line-up, it doesn’t quite deliver to the level that the other attractions do. With some impressive rain (which means you will get wet), lighting effects and passionate acting, this attraction still needs some fine-tuning to bring it up to the level the rest of the event sits at. While some scares are effective, we found the repetition of them lessened the impact and left us feeling it went on for a little longer than needed. Whilst an interesting concept, and bold move to step away from the traditional scare maze, this attraction has great potential once improvements are made.

At the heart of this scream park is a hub of varied food outlets, live music and plenty of covered seating for guests to take advantage of. Entertainment is provided on the live music stage throughout the evening by the resident band, The Screamfest Six – a flash mob dance party who perform at set times throughout the evening. Alongside the band is the park’s Demon DJ who looks rather like a familiar clown from Derry! Just off from this hub is a selection of fairground rides and Hill Billy Joe’s Zombie Paintball Smash – where you can shoot real life zombies on the loose from Joe’s Zombee Zoo. These attractions require an extra charge with tokens available to purchase on the night.

Overall, Screamfest Resurrected, located in Burton upon Trent, is a must-visit attraction this year. Featuring four solid scare mazes and a great atmosphere, there’s plenty going on in every corner, and something for everyone to do, regardless of if you choose to enjoy the scares or not. Whether local or travelling from further afield, you won’t be disappointed with the event.

Screamfest Resurrected runs on 14th-17th, 22nd-24th and 26th-31st October 2021. With three ticket types, Screamfest, Screamfest Unlimited and Scaredy Cat (if you don’t want to experience the scares but have severe FOMO), prices start from £22 online for Screamfest tickets, and £12 for Scaredy Cat tickets. Selected nights are already sold out, proving the popularity of this event.

Are you visiting Screamfest or any other scream parks this year? Make sure you share your thoughts and reviews over on the Attraction Source Forum. 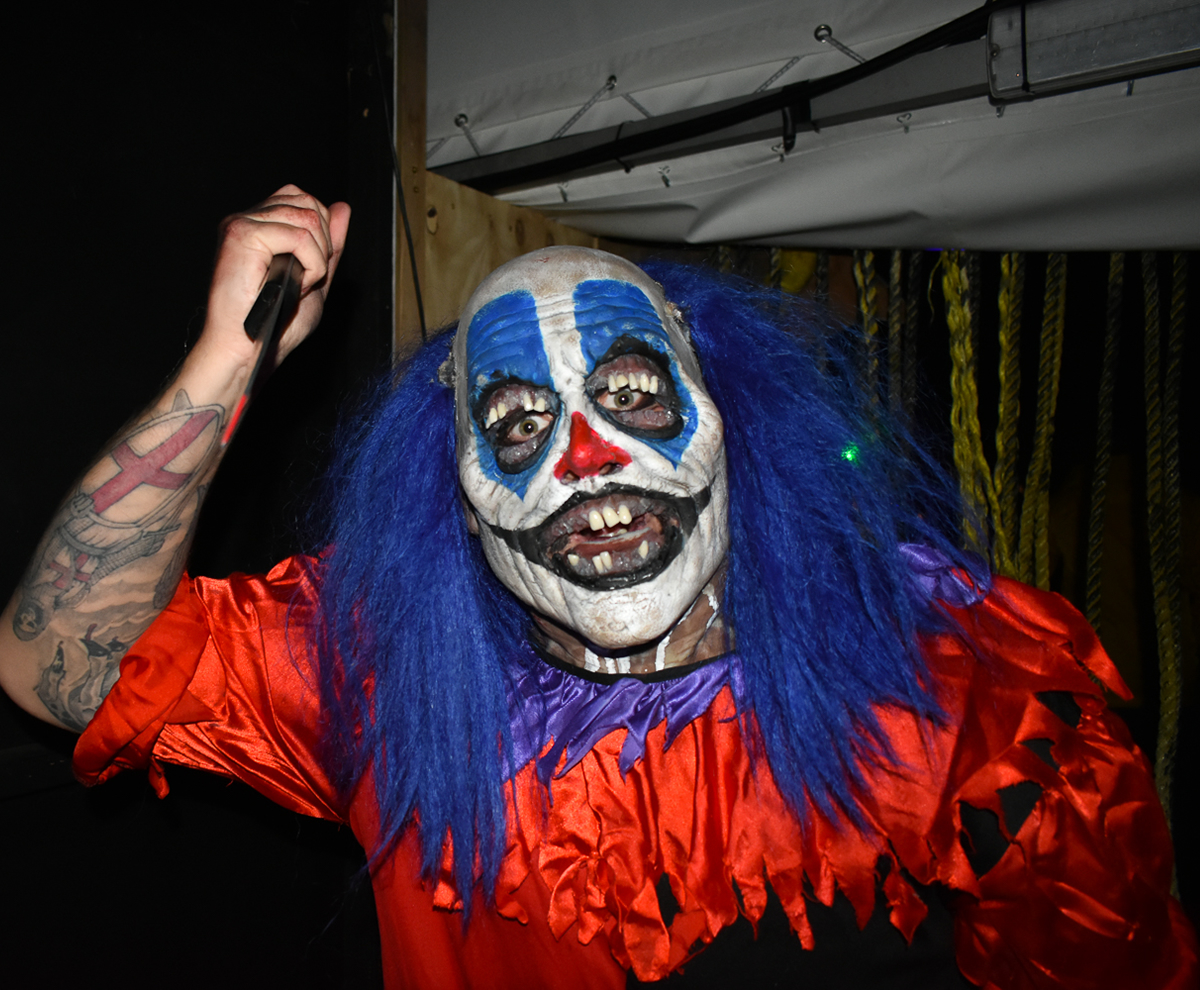 2022 sees another strong year for Screamfest

2022 sees another strong year for Screamfest