Thorpe Park Resort has today unveiled its new for 2020 attraction, Black Mirror Labyrinth, along with an ‘other-worldly’ season of thrills. Attraction Source rounds up all the details revealed so far.

Black Mirror Labyrinth will see the world’s first live Black Mirror experience, inviting guests to playtest the Labyrinth. Fitting within the popular Netflix series’ typically dystopian exploration of new technologies, guests will enter a hypnotic maze using cutting-edge visual technology and sensory-defying environments. Likely to be based within the building last used to host The Walking Dead: Living Nightmare during FRIGHT NIGHTS, the Resort poses the question: “Will you keep your grip on reality or will you lose yourself in the digital mainframe as this unpredictable digitised dimension reveals an uneasy truth that manipulates and displaces your very existence, leaving you questioning how well you really know yourself.” This new attraction is expected to open late March and has no additional charge. 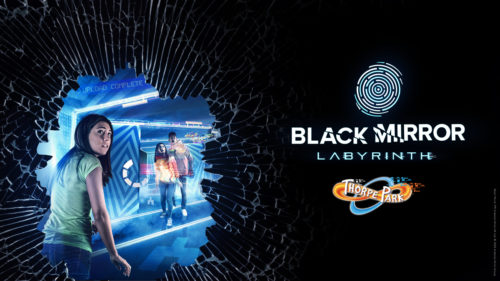 HYPERSpring will launch the season alongside the opening of Black Mirror Labyrinth. From 4th April until 31st May, the Resort will introduce events and activities with decidedly space sounding themed names. The Cosmic 6 Challenge will invite guests to unlock a cryptic code phrase as they ride some of the Resort’s thrill rides – perhaps similar to the Feared 5 Challenge during last year’s Fright Nights. Whilst throughout the May Half Term, the Resort will battle a trans-dimensional glitch, in the intriguingly named Hyper Ride Roulette. This week long event will see “random rollercoaster replays, detonation delays and system overloads”. The first of these might suggest ways of winning fastrack passes, the others perhaps less clear. There will also be a series of limited edition themed delicacies available at certain outlets across the Resort.

With no new information released at this time, FRIGHT NIGHTS will again provide the Resort’s season ending event, taking place on select days from 3rd October to 1st November. However, if Black Mirror Labyrinth does go in the previous The Walking Dead: Living Nightmare space, could we see a maze in a new location or will Black Mirror Labyrinth just act as a replacement for a FRIGHT NIGHTS maze? 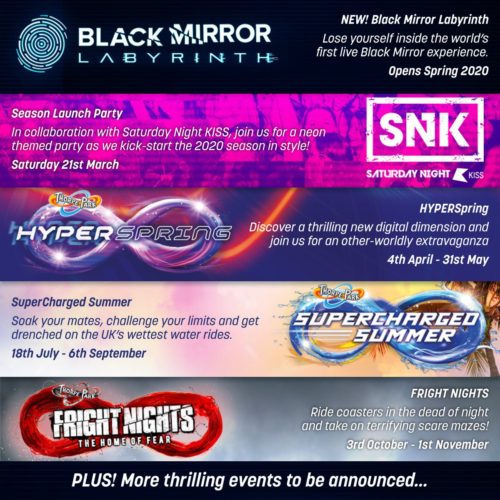 Are you excited for Black Mirror Labyrinth? What are your views of this upcoming ‘other-worldly’ year? Do you think there is more to the season long space theme and intriguingly named spring events? Make sure you share your thoughts on the Attraction Source Forum.