The submitted plans detail for the first time the appearance of the ‘Theming Feature’ which will be situated in the plaza by the main entrance to the ride. Standing at 8 metres tall, the feature will take the form of what appears to be a disused watch tower or water tower. In-keeping with the disused warehouse theme, the feature will be constructed from distressed brick and include a corrugated iron roof and broken and boarded up windows. Also detailed is the queue line entrance styled as an imposing gateway with chain-link fencing and distressed brickwork, which will split guests between the regular and fastrack queues. 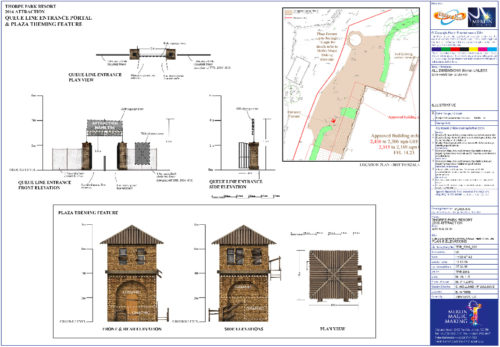 Also detailed within these latest sets of plans are some changes to the previously approved building and queue line dimensions. Originally, plans indicated that the queue outside the building would be entirely covered. However, the drawings submitted today indicate that the amount of queue line which will be covered has been reduced by approximately half. The overall footprint of the ride building has also been slightly reduced from 2438sqm to 2306sqm, although it is unknown why this reduction has been made.

New proposed site plans, and reports accompanying these latest submissions also provide some further insights into the interior of the ride building. Roughly two thirds of the building has been designated as the ‘Ride Area Main Building’, with the ride station situated adjacent to it being described as ‘Station/Warehouse’. Reports describing the construction of the building detail that “within the building there will be a 3 metre deep (below existing ground level) pit which is expected to be constructed in reinforced concrete. Allowing for construction build up, the pit excavation is expected to be approximately 4 metres below existing ground level.” When compared to the original plans submitted, this means that the portion of the building set to house the ride will have a maximum height of 10 metres, whilst the station/warehouse area will have a maximum height of 13 metres.

One of the more detailed plans submitted shows the interior of the building for the first time. This floor plan indicates that there will be two levels to the ride building. Guests will enter from the queue line via the entrance towards the bottom left hand side. Once inside, the plans indicate guests would drop their bags at the baggage hold before being batched into a pre-show area. Once the pre-show is complete, guests would then make their way upstairs to the main station to board the ride. Once the ride is complete, guests will dis-embark, making their way downstairs to collect their bags, before exiting through the retail shop. 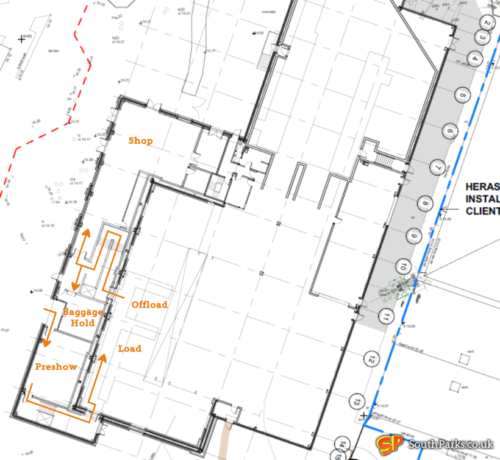 What are your thoughts on these latest plans? Could ‘Project Whitechapel’ be our biggest clue yet to the new attraction’s theme? Make sure you discuss your thoughts over on the Attraction Source Forum.