The theming is almost complete at some parts of the ride...
5 Train Ride Operation is possible and there are 4 Launches.
Now the layout is finally I think. Some changes have been made even after the first Schienenschluss but now the machine is running nice! 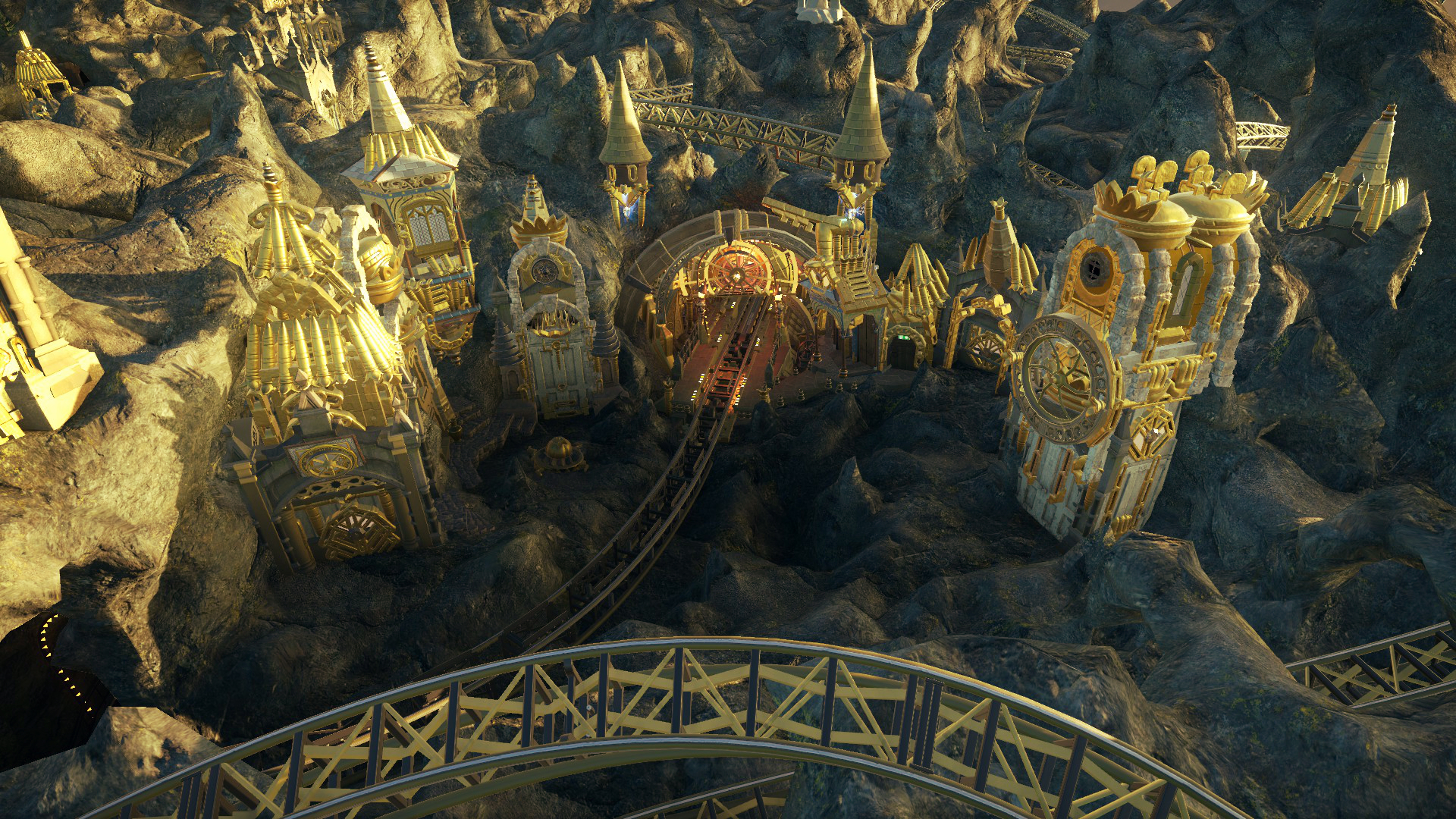 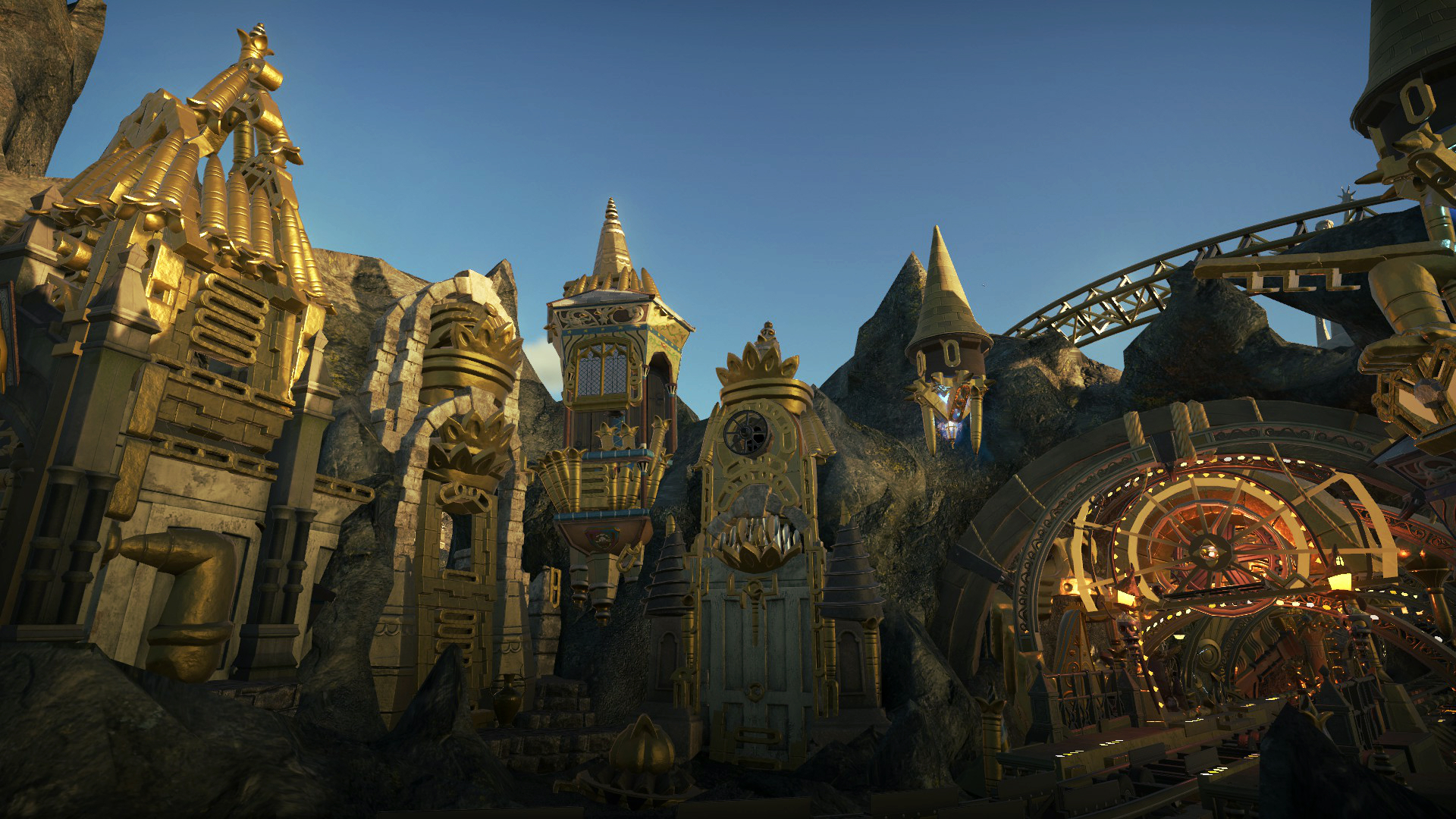 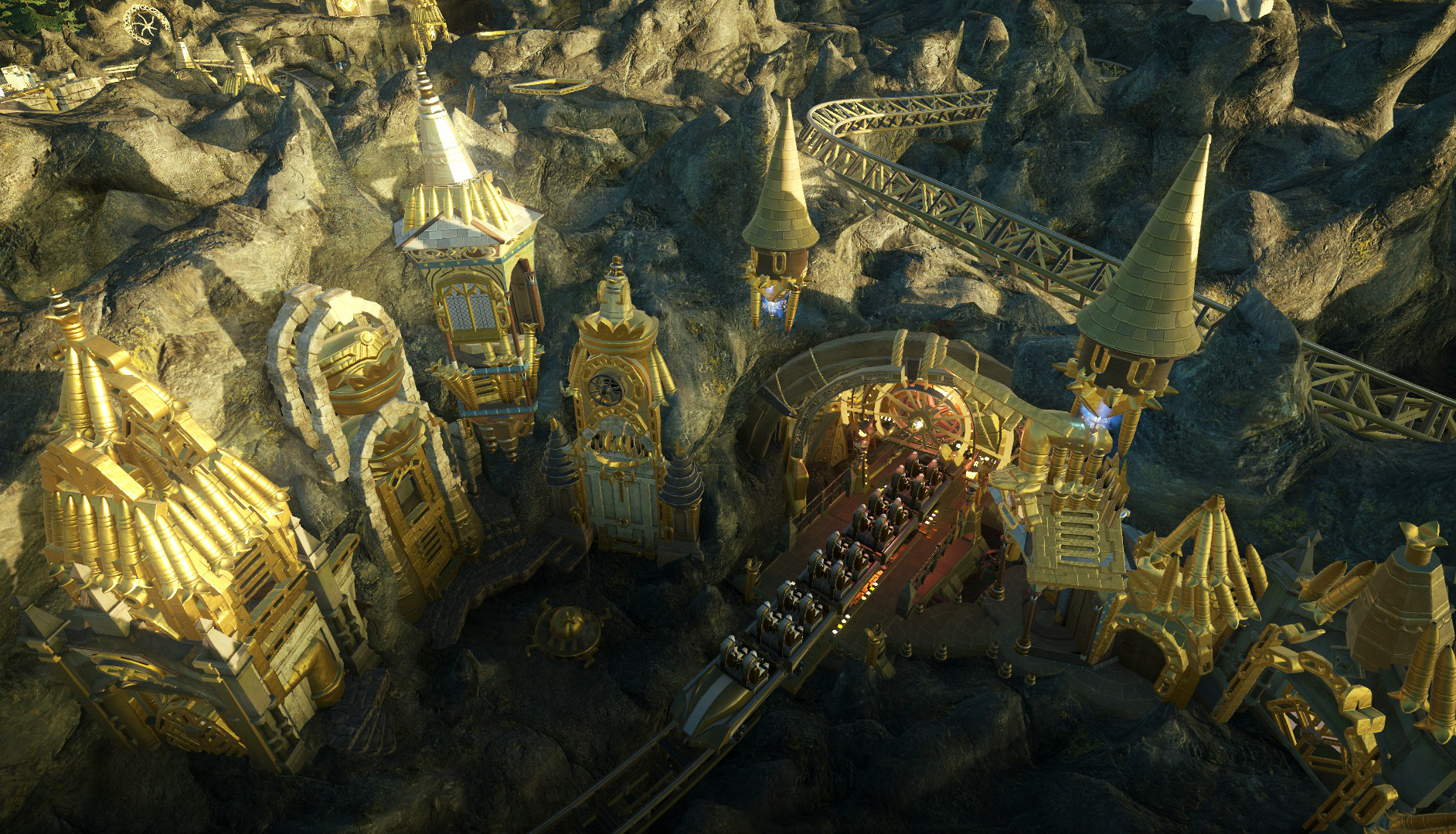 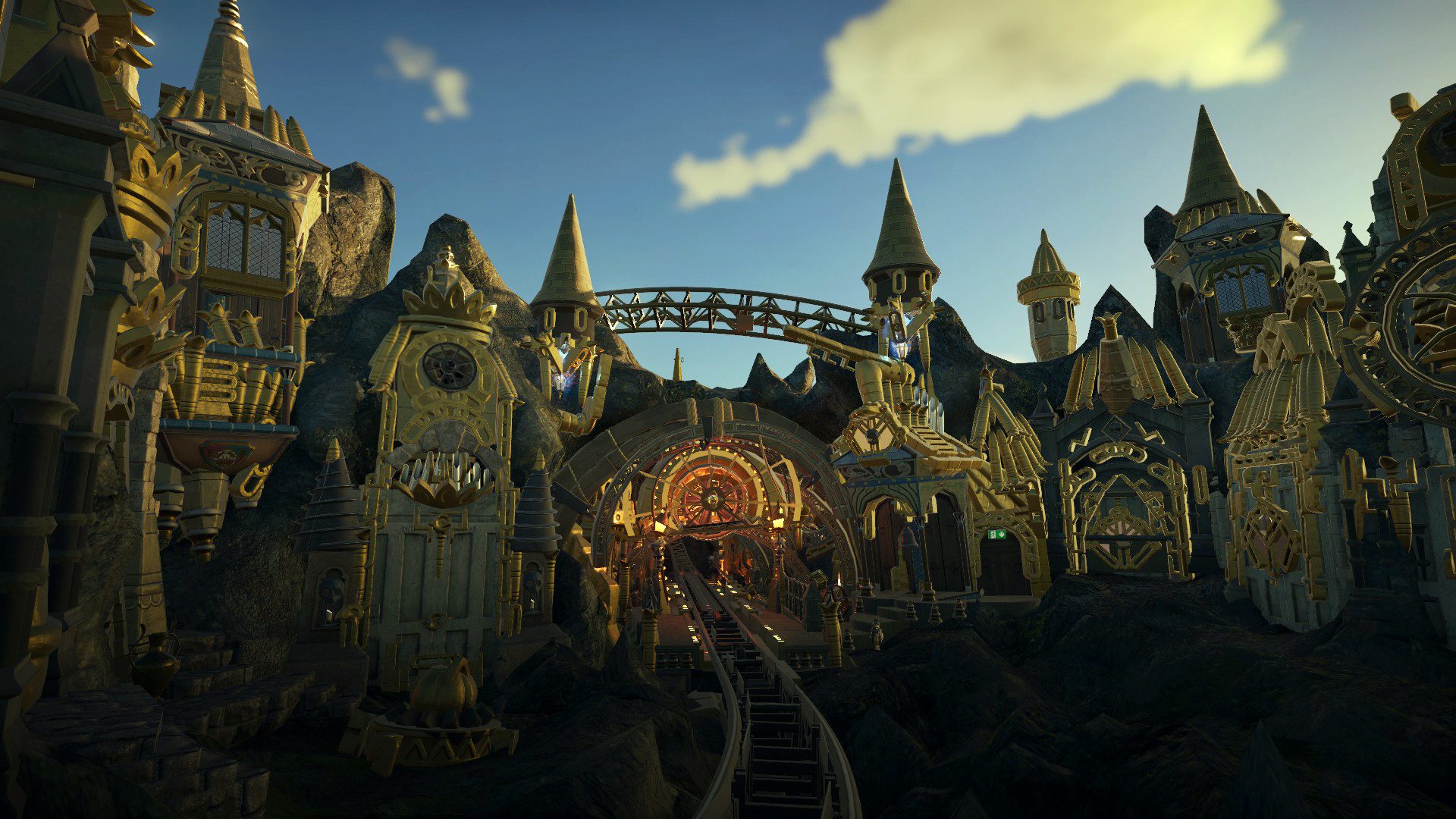 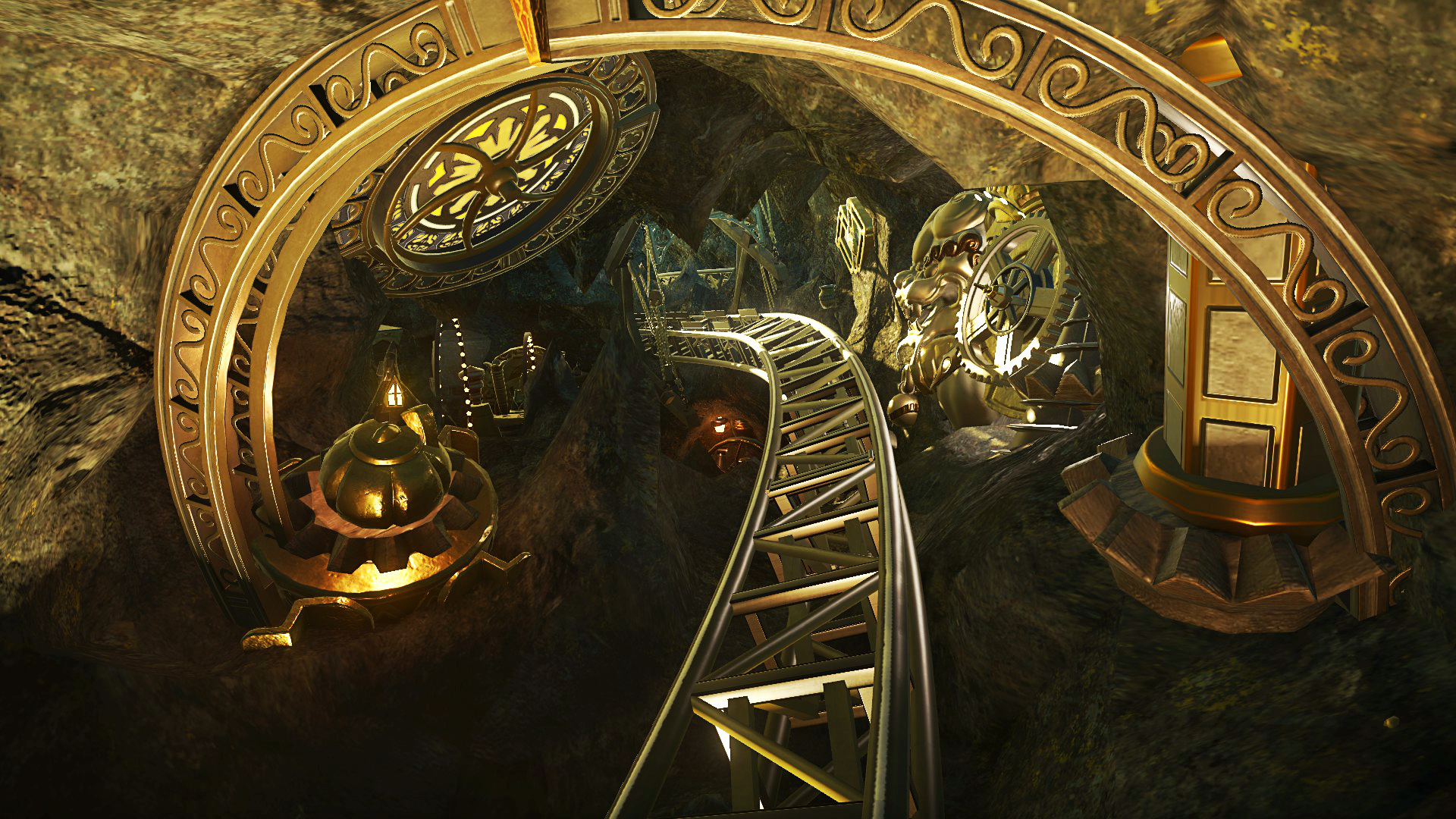 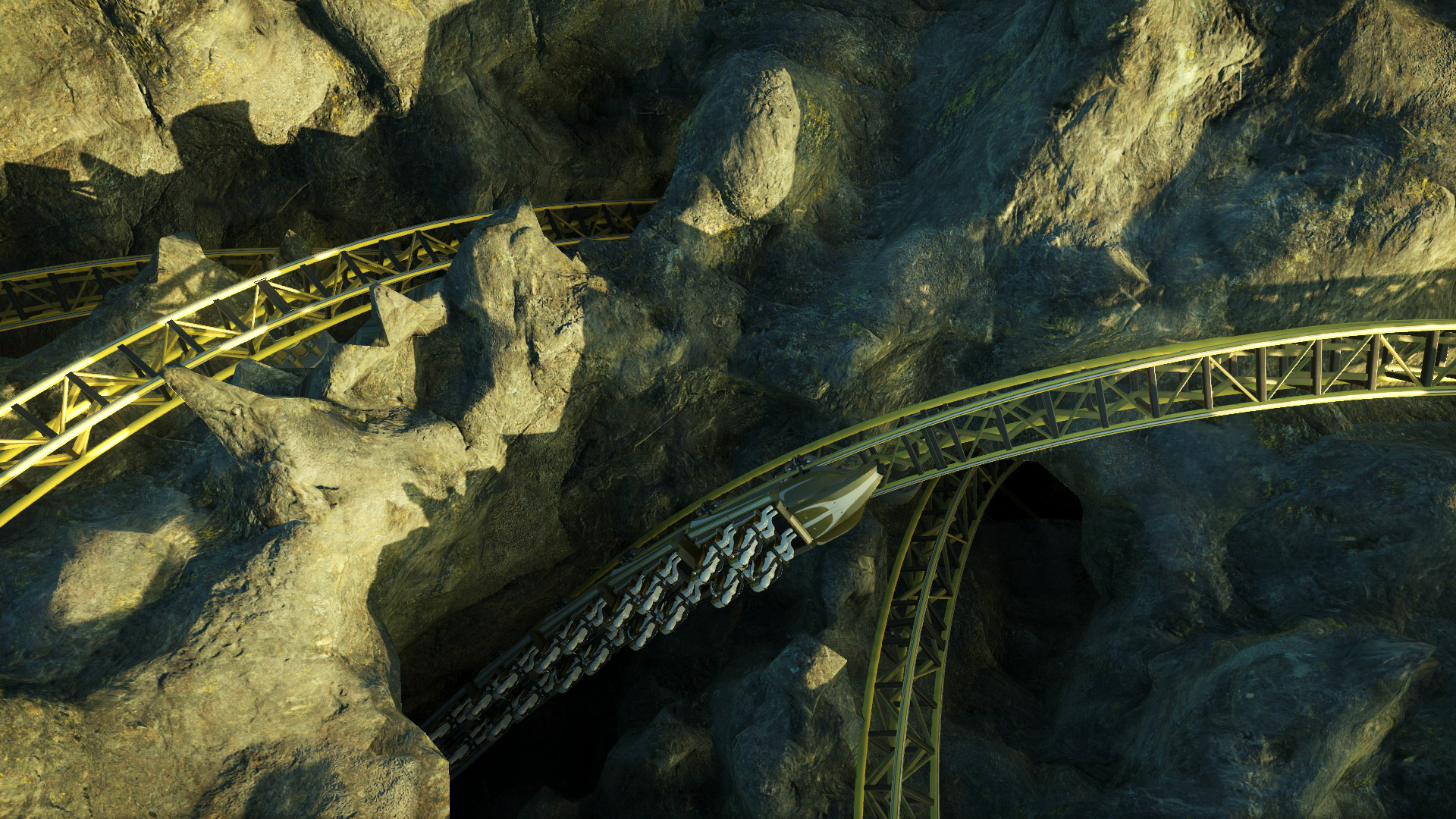 This is what the station area looks from above. Most of the facades and buildings are still under construction.
The basement is nearly completed with it's tunnels and rock formations. 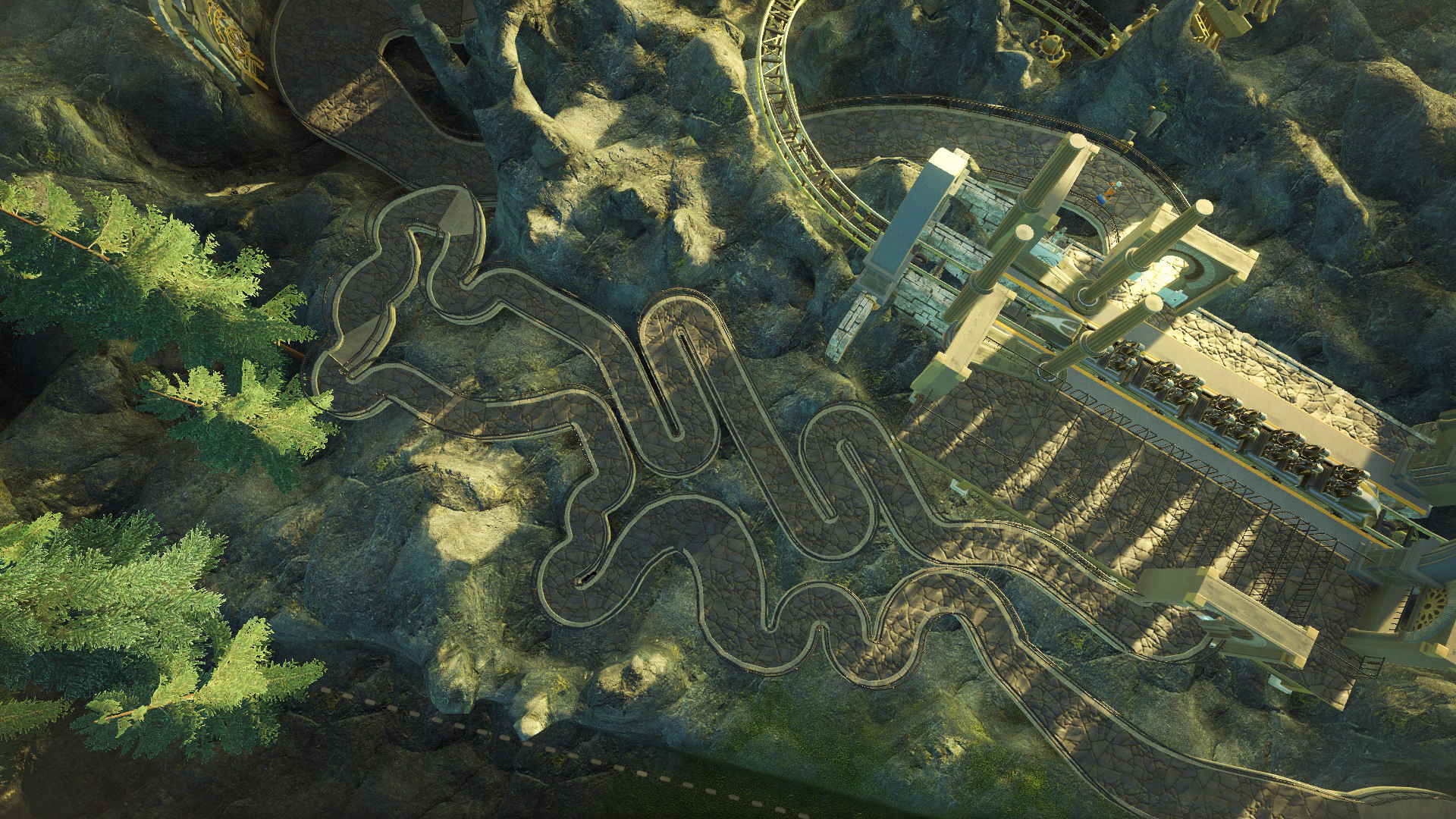 And we go down into the Dwemer caves... 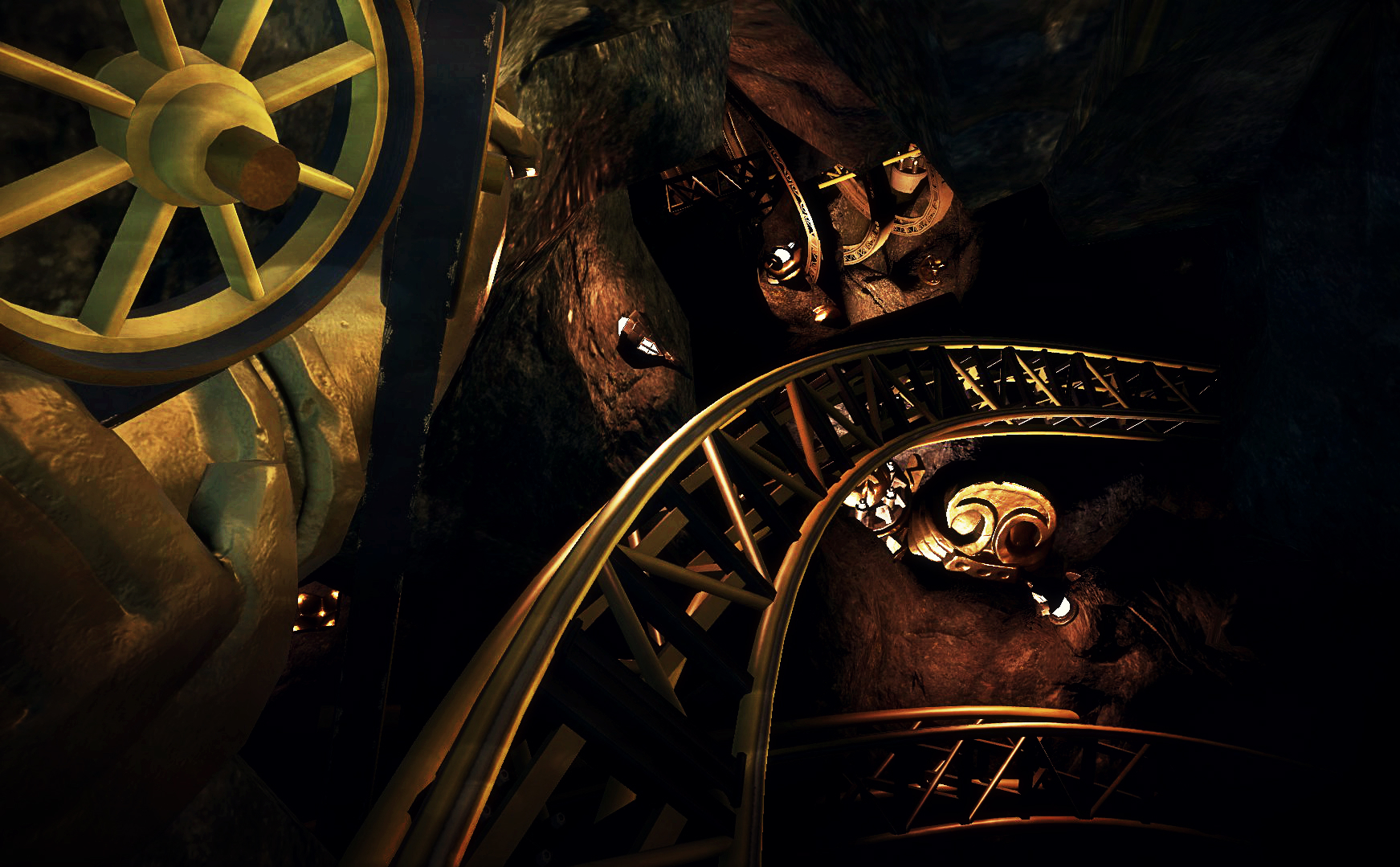 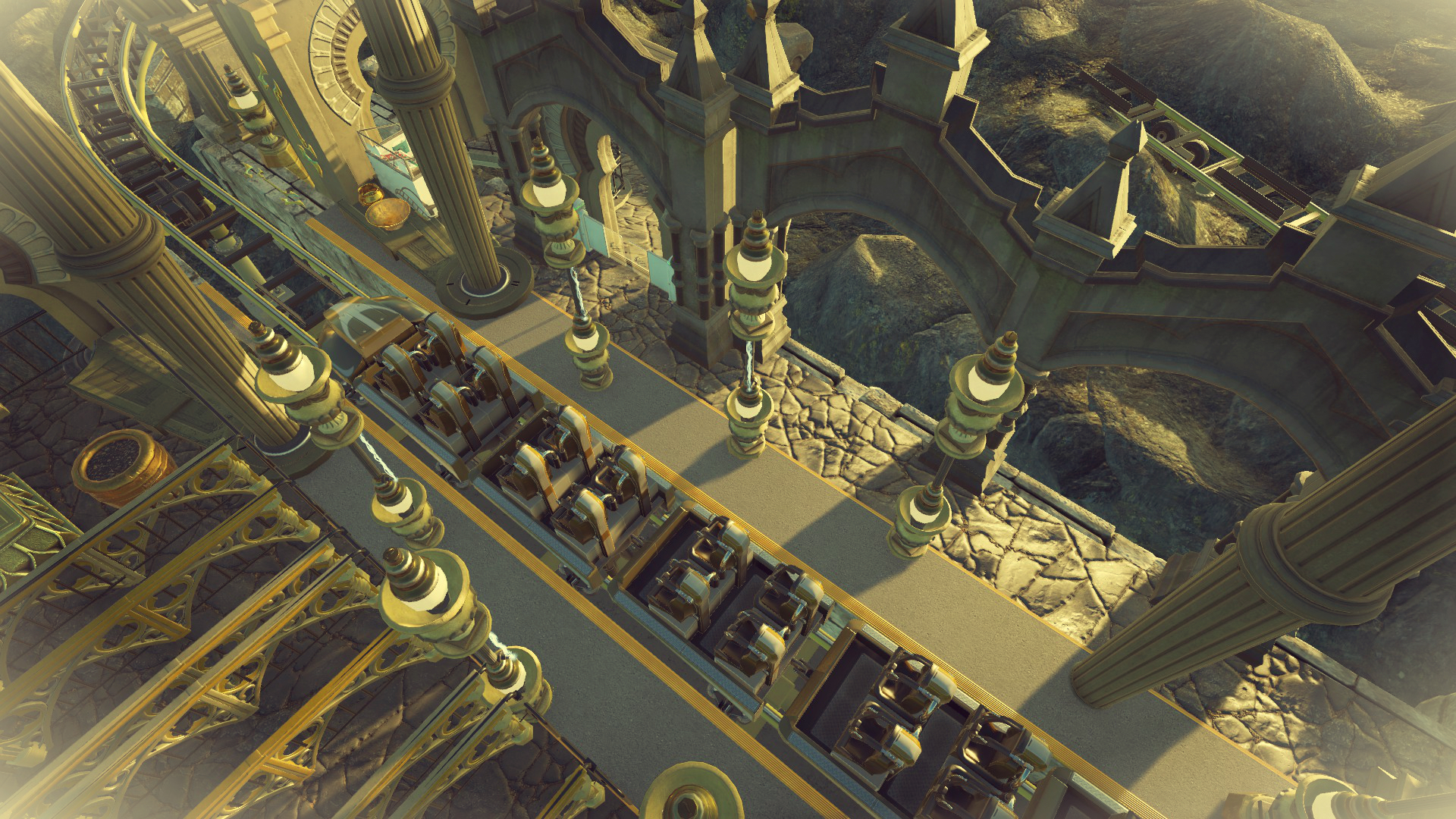 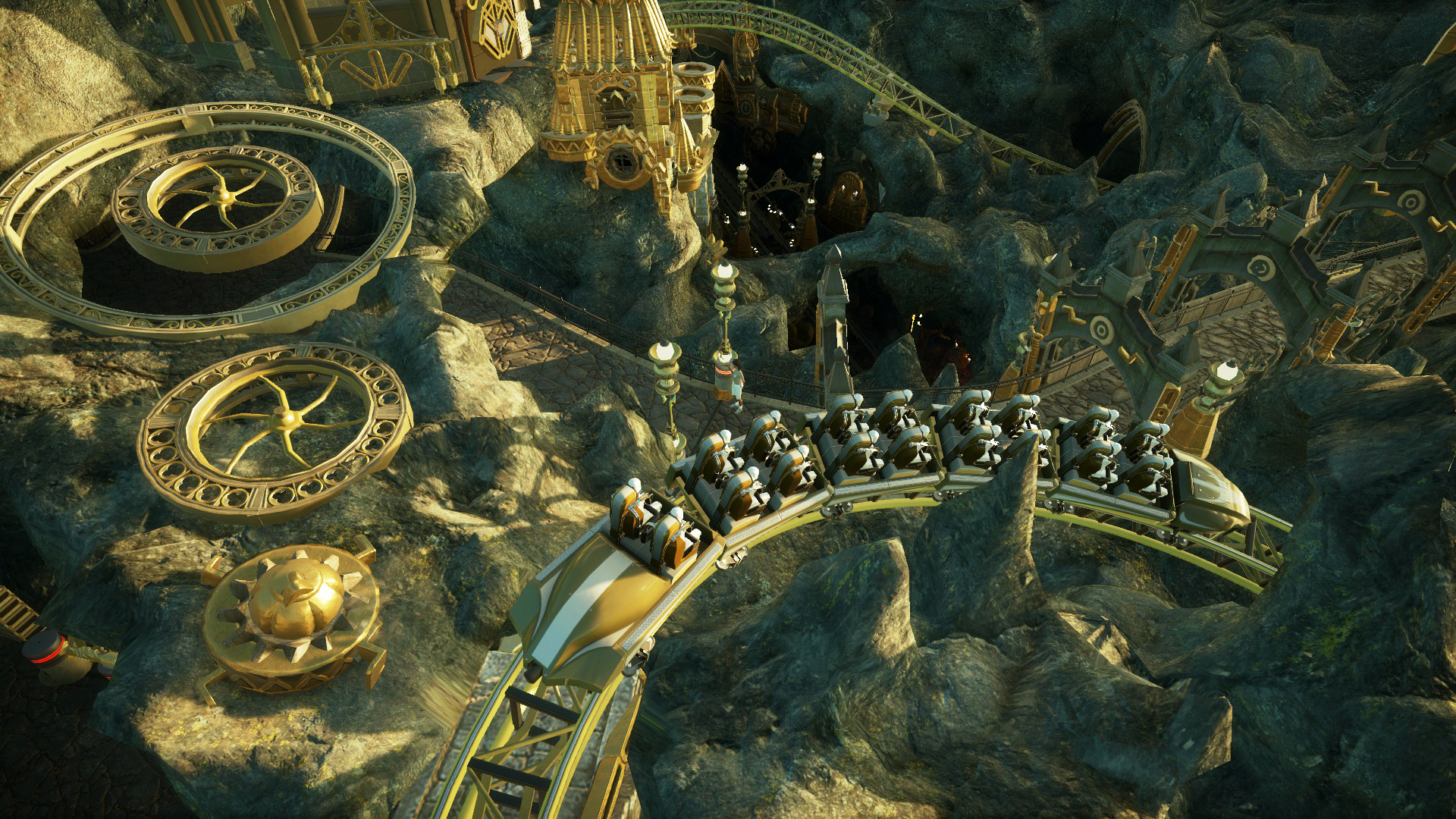 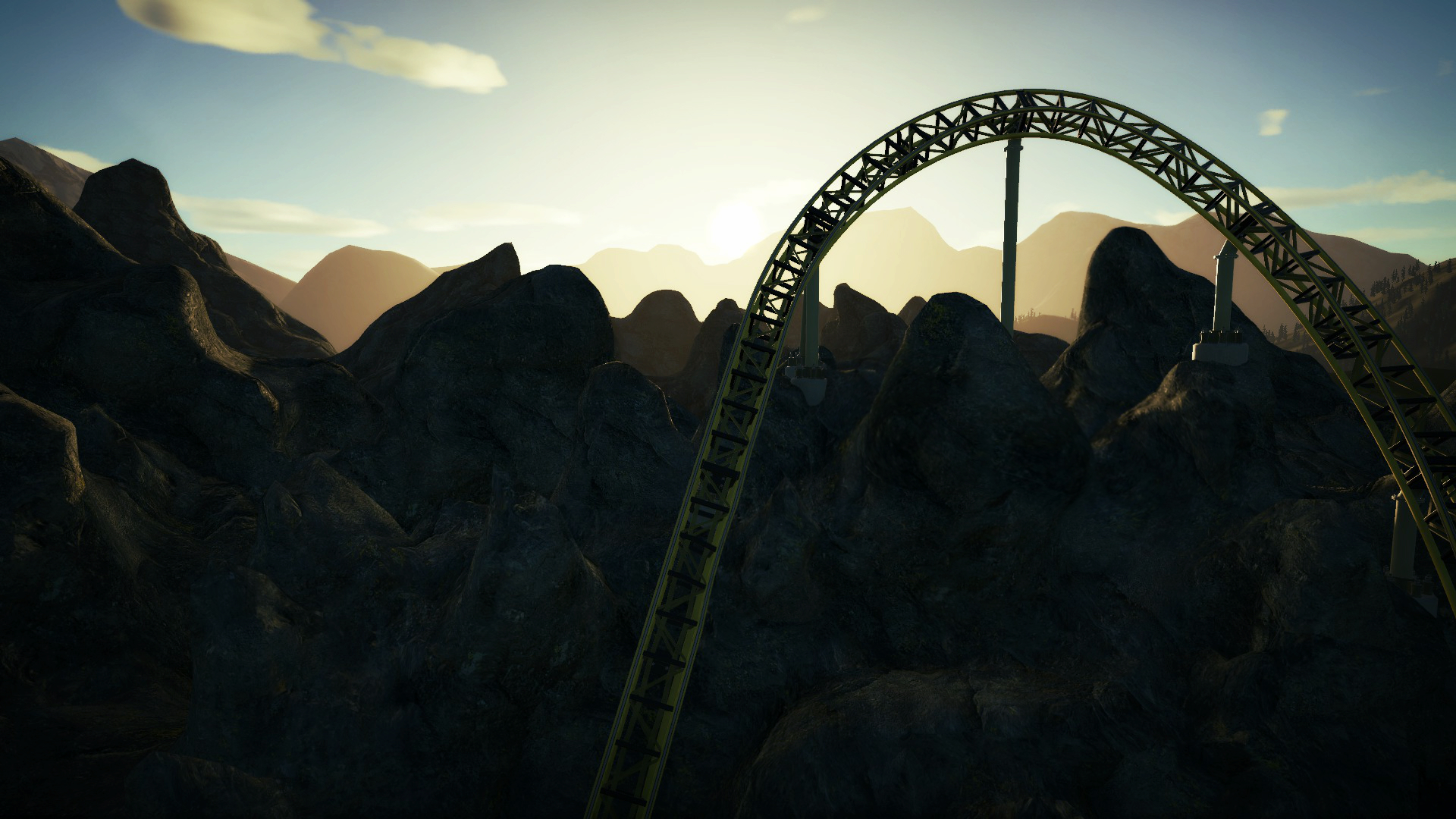 As theming takes shape we rise high above the mountains into the air... 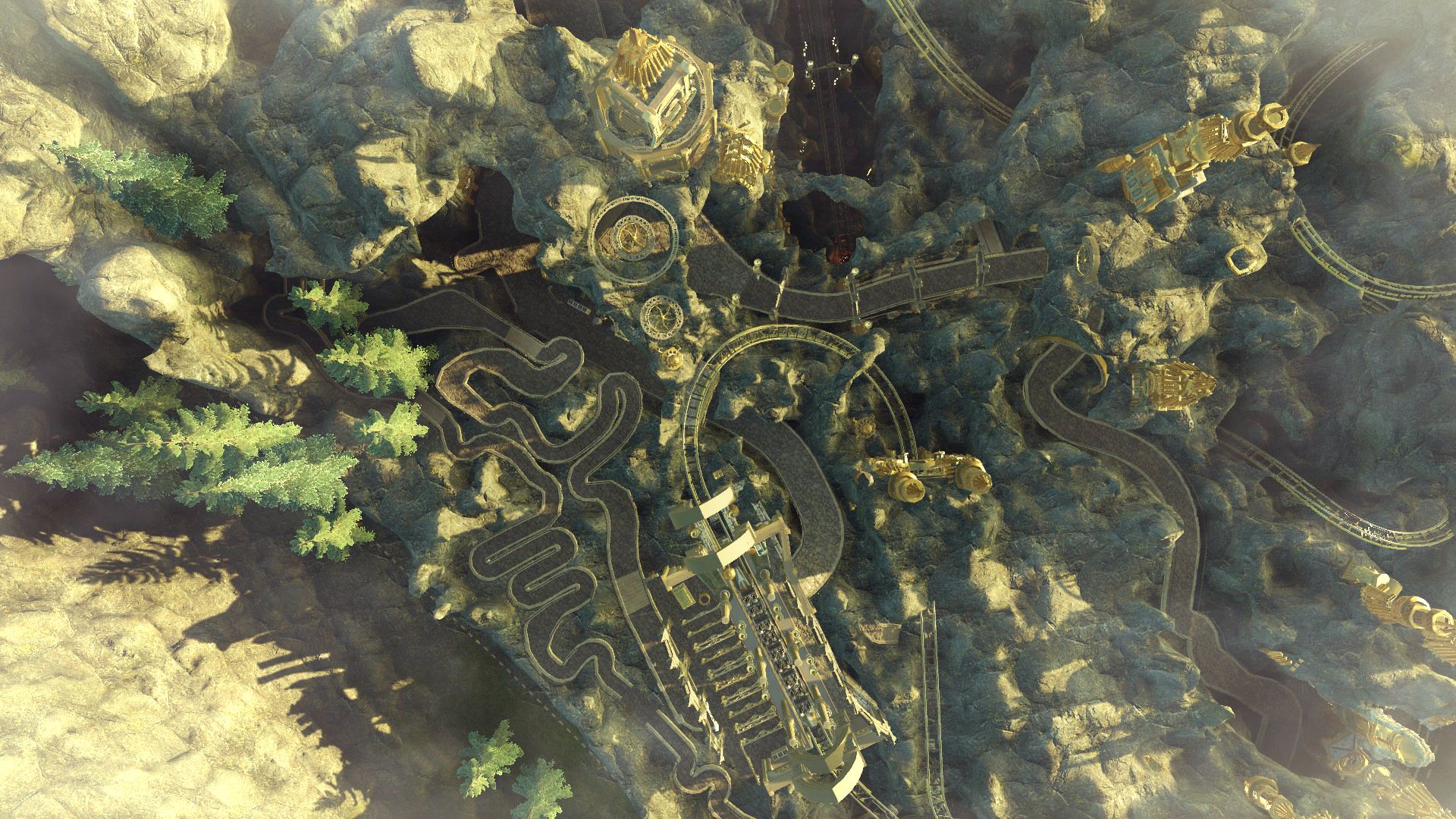 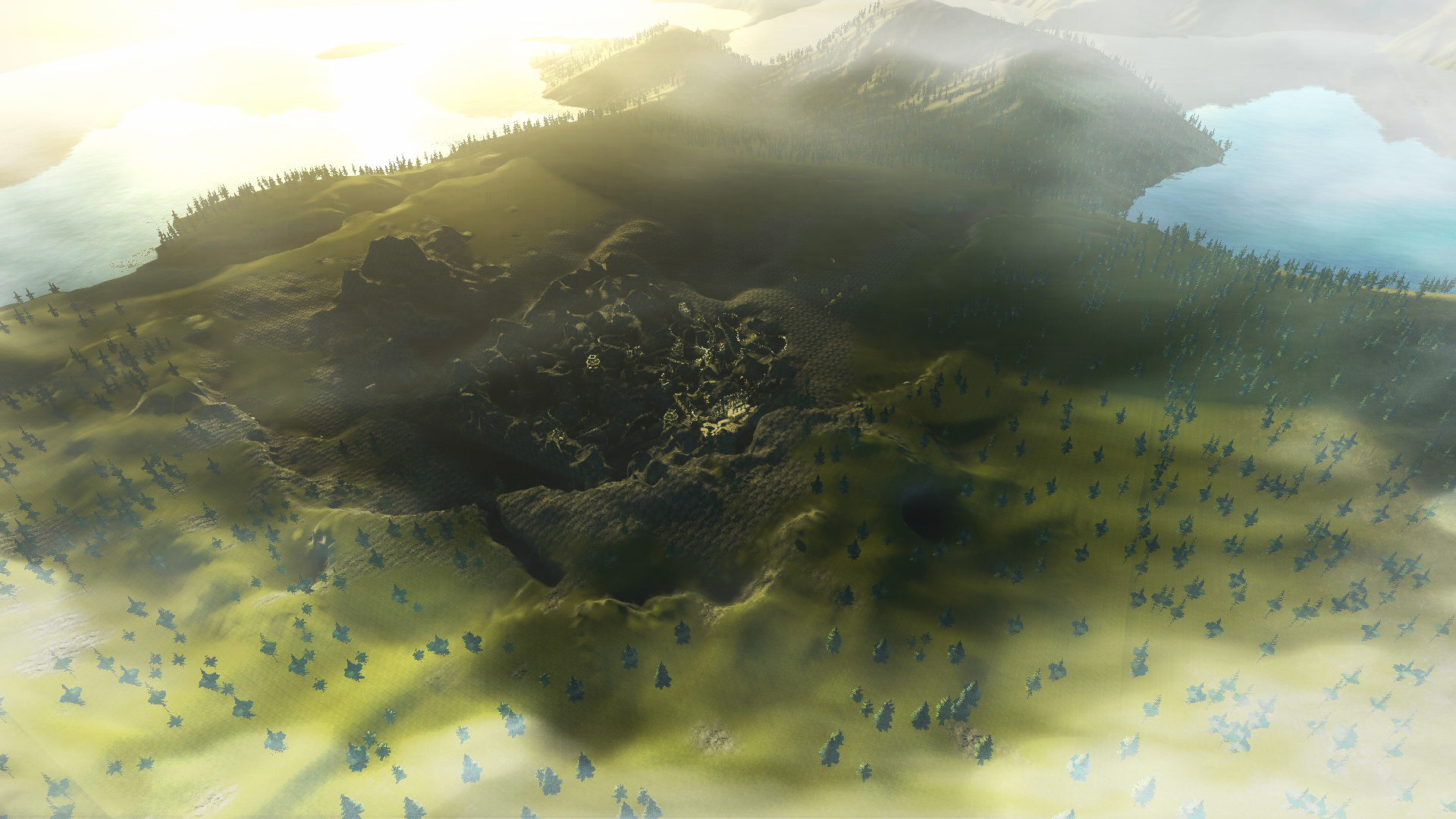 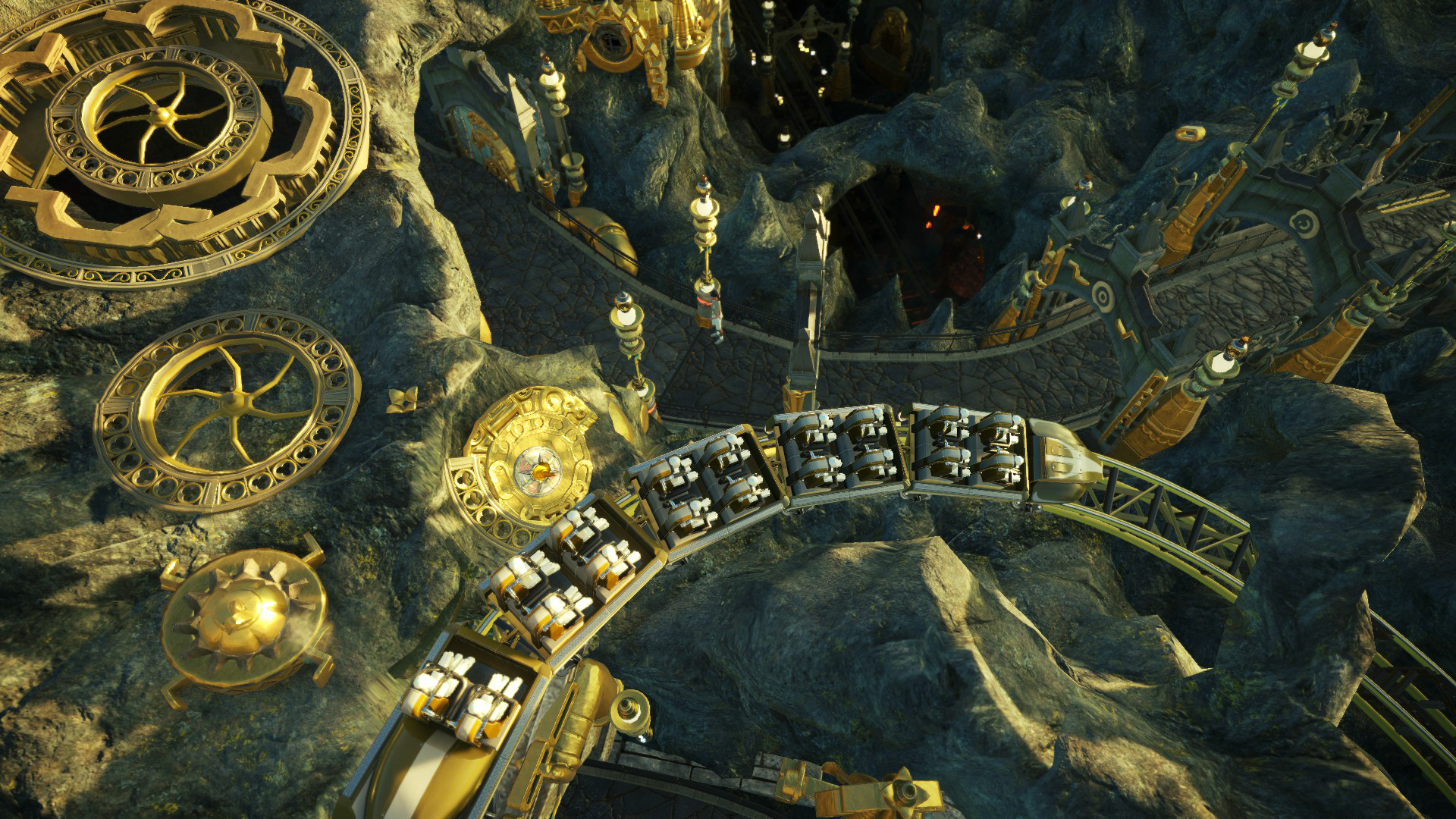 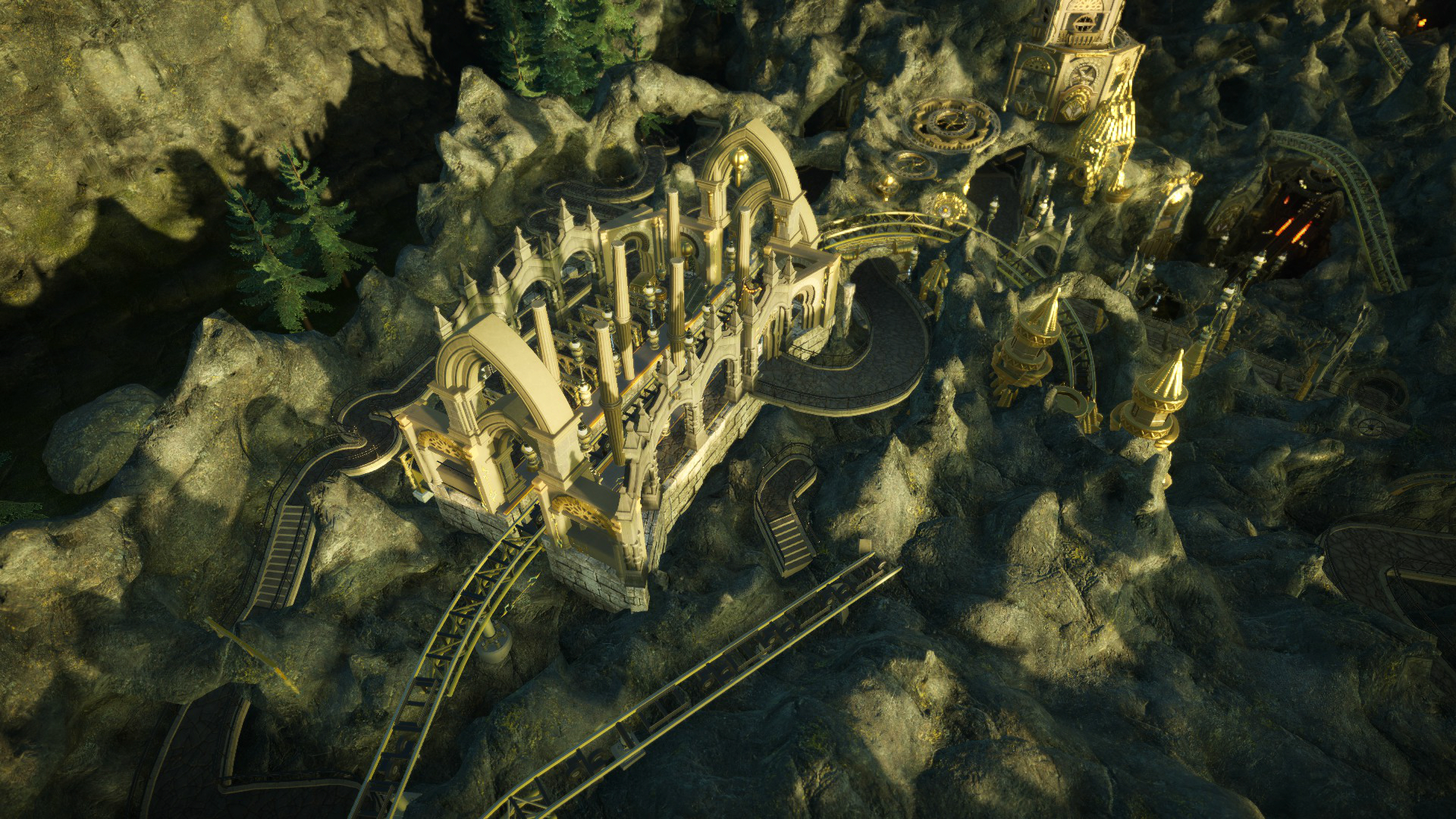 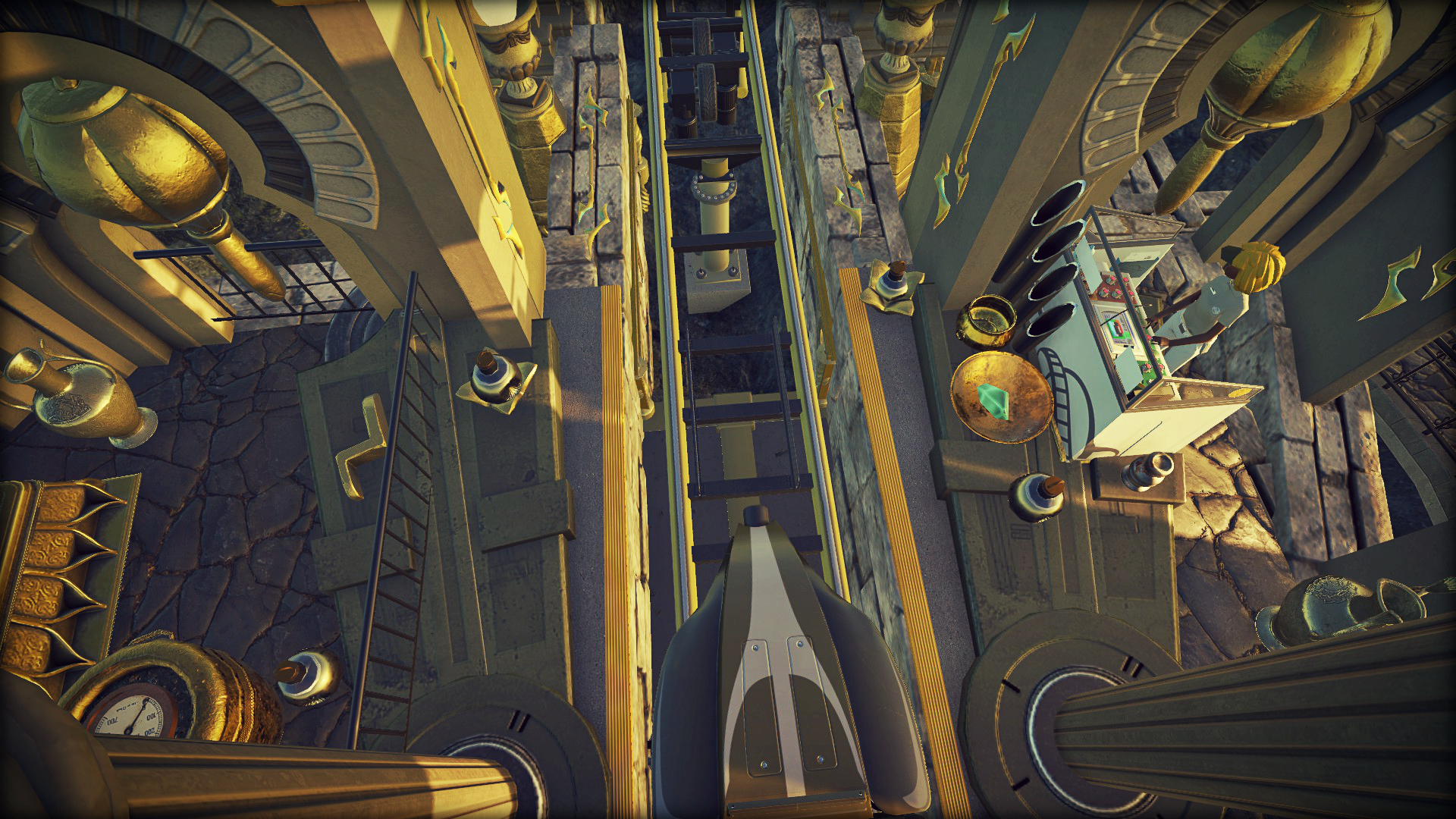 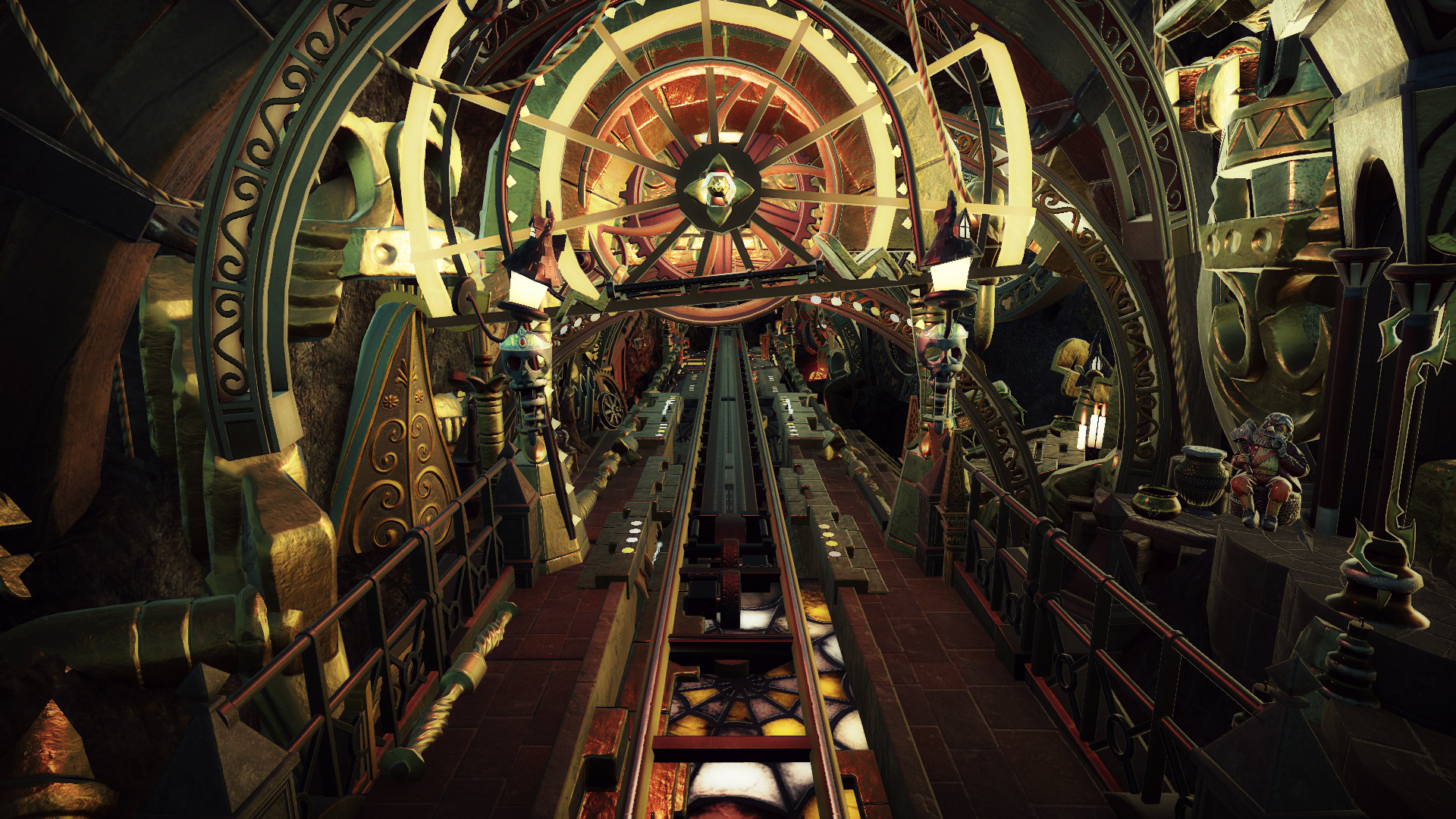 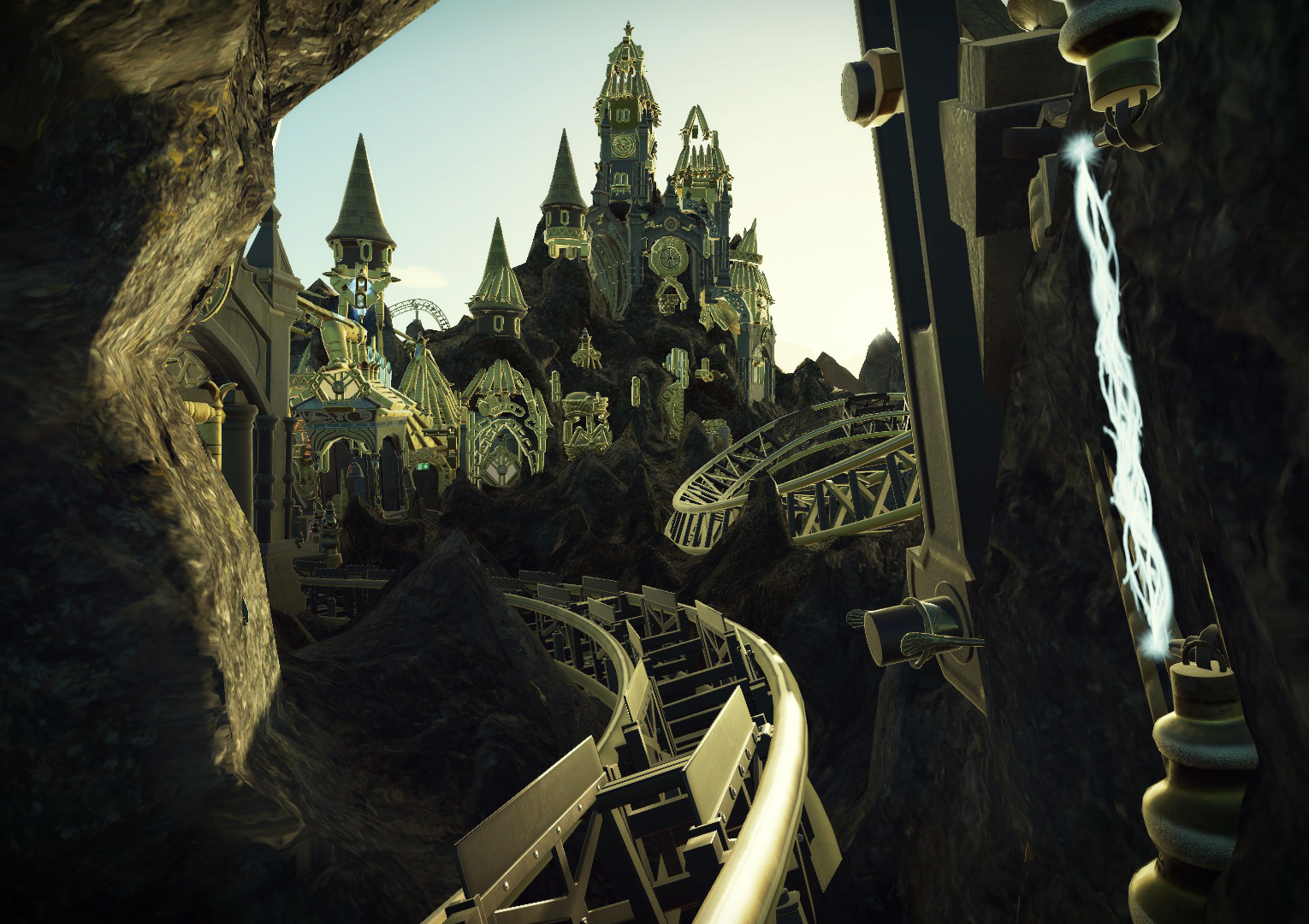 NJÖRD, god of the scandinavian sea, invites passengers to an adventurous journey through his realm.
Inspired by Europapark's Rulantica concepts and the Scandinavian areas... 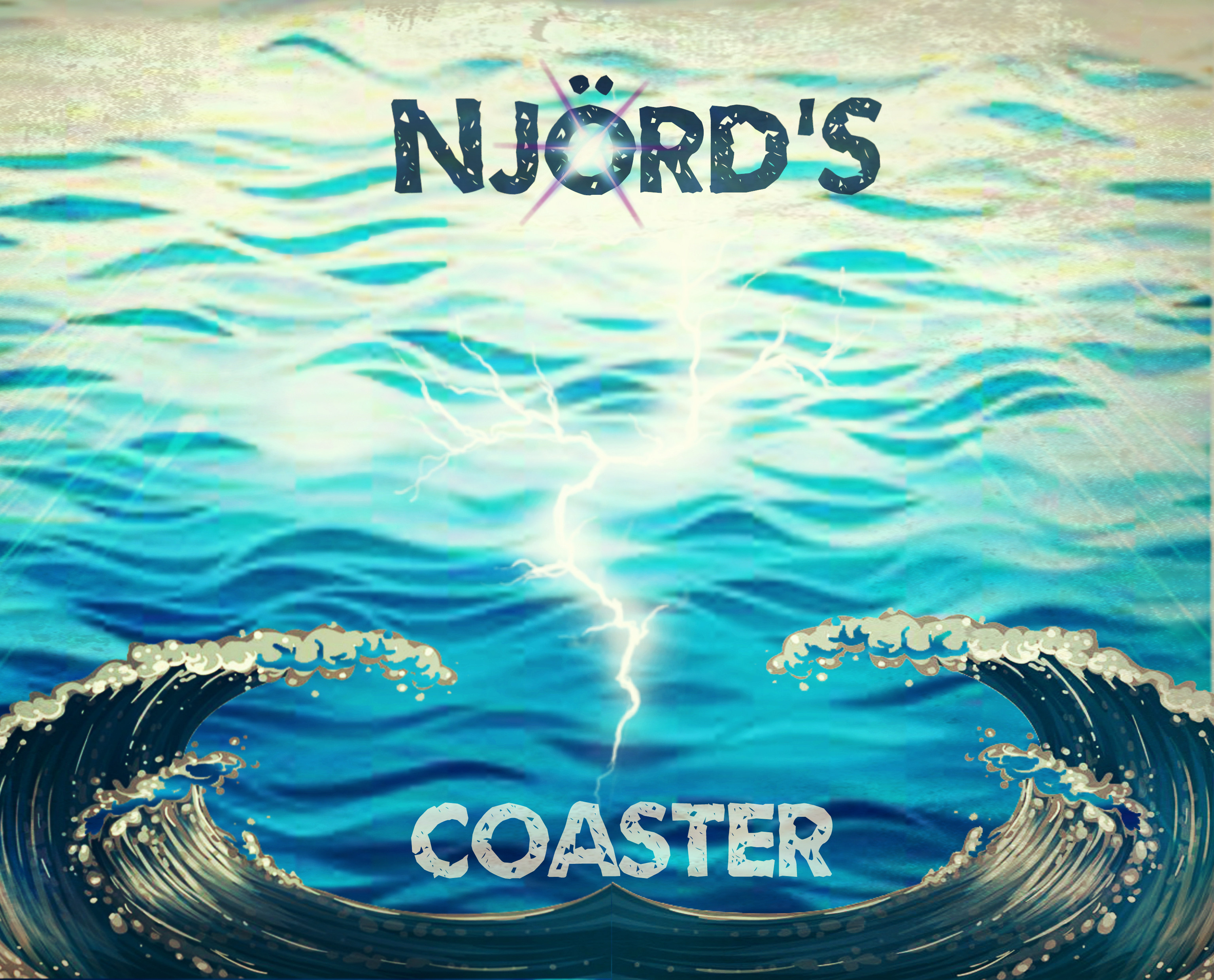 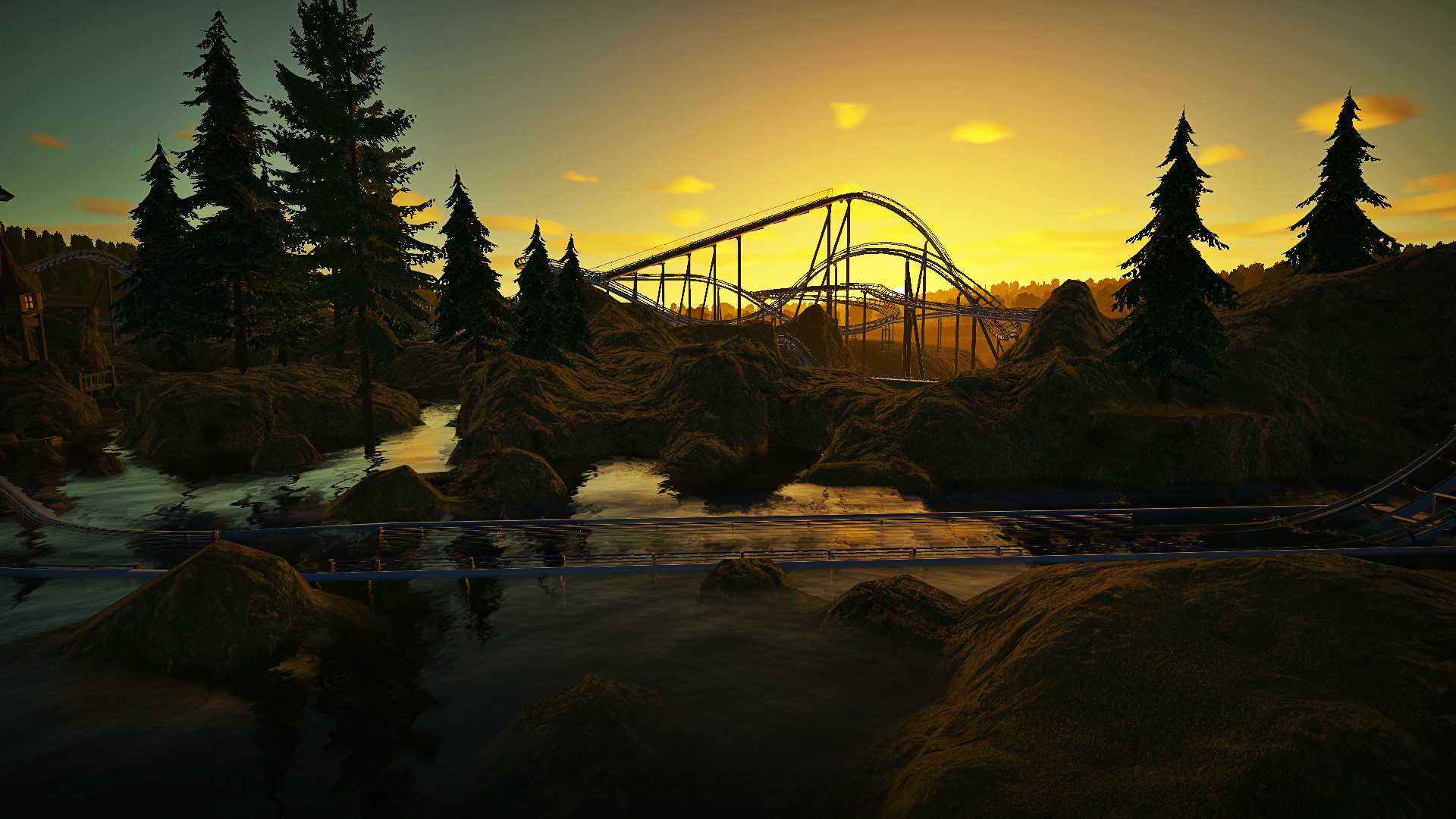 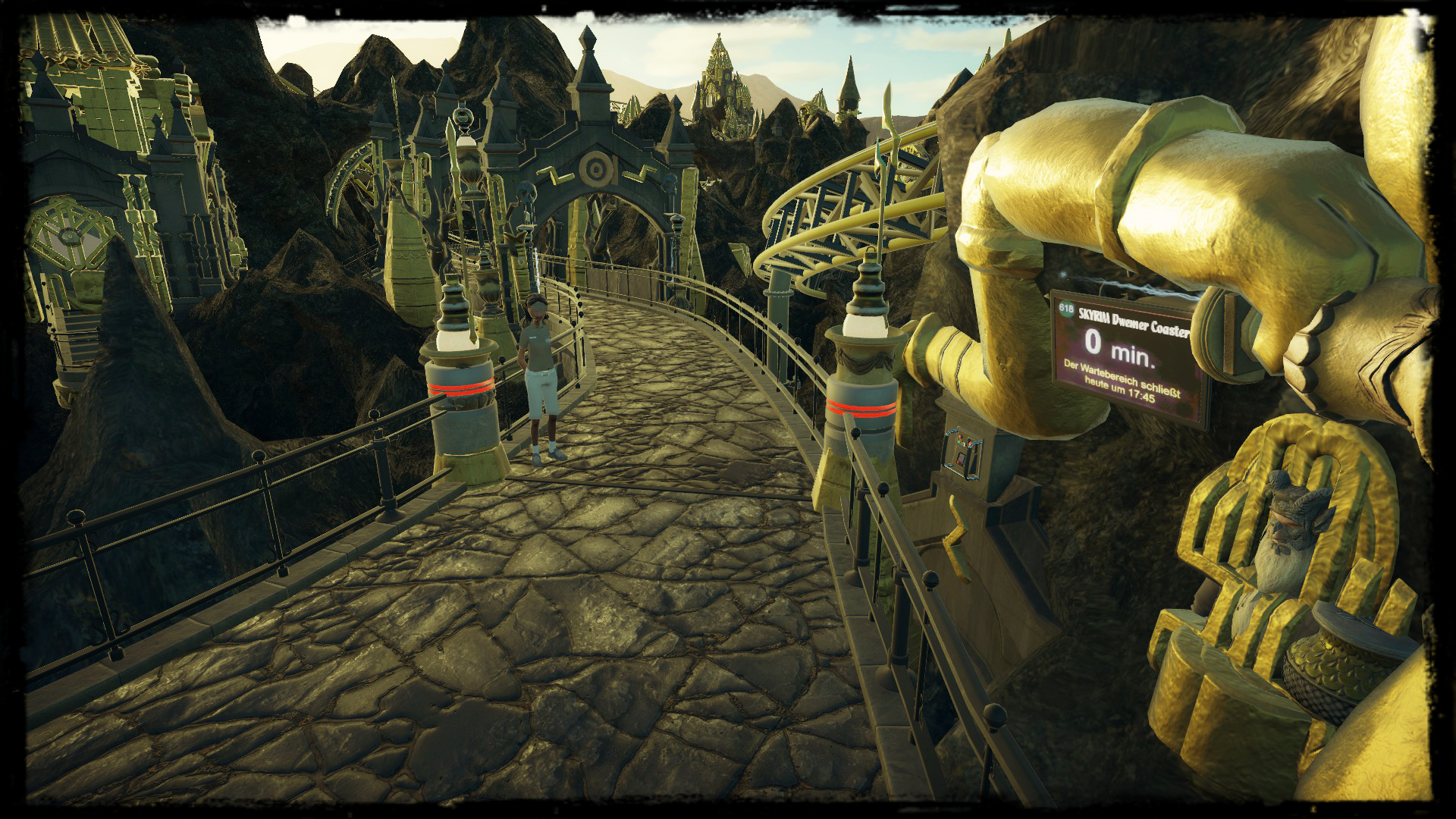 Now the ride is complete. Have fun!

Now its time to explain the story a bit!

The first actual thing we see when entering the Ride is the waiting time display and a talking ancient Dwemer head.
At the entrance we have to store our bags and goodies in one of the lockers.
Just scan your park ticket and a locker will open for you. (Its similar to the system used at Arthur,Königreich der Minimoys (Europapark))
After riding you will get your things back at the other side...
There is also a souvenir shop and another shop at the exit.

Then we enter the ride crossing over a bridge. When we look down we can see parts of the second launch.
We follow the queue until it gets down into a tunnel below the ground. There is also the extended queue line. (not seen in the video)

After the tunnel the queue goes upwards to the station. If you look closely you can see the stairs going up at the end brake of the ride...

Dwemer stuff and magical artifacts are seen in the station.

So the ride begins and after the first curve we go into a Dwemer mine tunnel.
A magical sun collector is running and we can hear thunder and energy loading up.

As the sunlight releases, the train goes outside again. A great Dwemer castle emerges and we get caught by a kind of generator.
Mechanical things everywhere. Then the train stops.
With the power of Logans heart we are launched into the rugged rockwork.
Fragments of this forceful artifact are seen on the right side at the first launch segment.

Like a dragon we are flying through the rocks and tunnels. After this part we are going down into another dark tunnel section.
We can see lava and melting minerals. As the train stops for a second time, we see a dark elf holding an electric scepter.
Maybe it was his idea to built this machine. With electrical force we are launched again, now with much more speed.
It looks like a mining facility. Maybe they are building another castle or palace there...
We rush through another tunnel, and then we are outside again, experiencing some great airtime.
When you look at the left side, you can see a viewing platform for spectators and the entrance to the themed area.

And it goes even deeper into underground systems. When we are over the earth again, suddenly the track goes down and we enter another Dwemer mine entrance. There are some magical minerals here! Tension is in the air and the train stops for a few seconds.

Then we are launched for the third time. This launch is the most intense one of the ride (approx. 98 km/h)!
We reach the highest peak of the mountains with a fantastic view. Swirling down again we are passing by the castle.
After another high peak we go down into a tunnel filled with the blue energy, the Dwemer get from the underground mushrooms.
And so we are at the castle village again, rushing into another tunnel section were the train gains some final speed.
Going up again we have a fantastic view of the castle and we can also see the first launch with the generator.

Now we are at the end. The trains are slowed down as we are going into a final rock archway, were an ancient sun clock is rotating.
Underneath us is the queue and we are going back into the station. On the right side you can see the maintenance building. 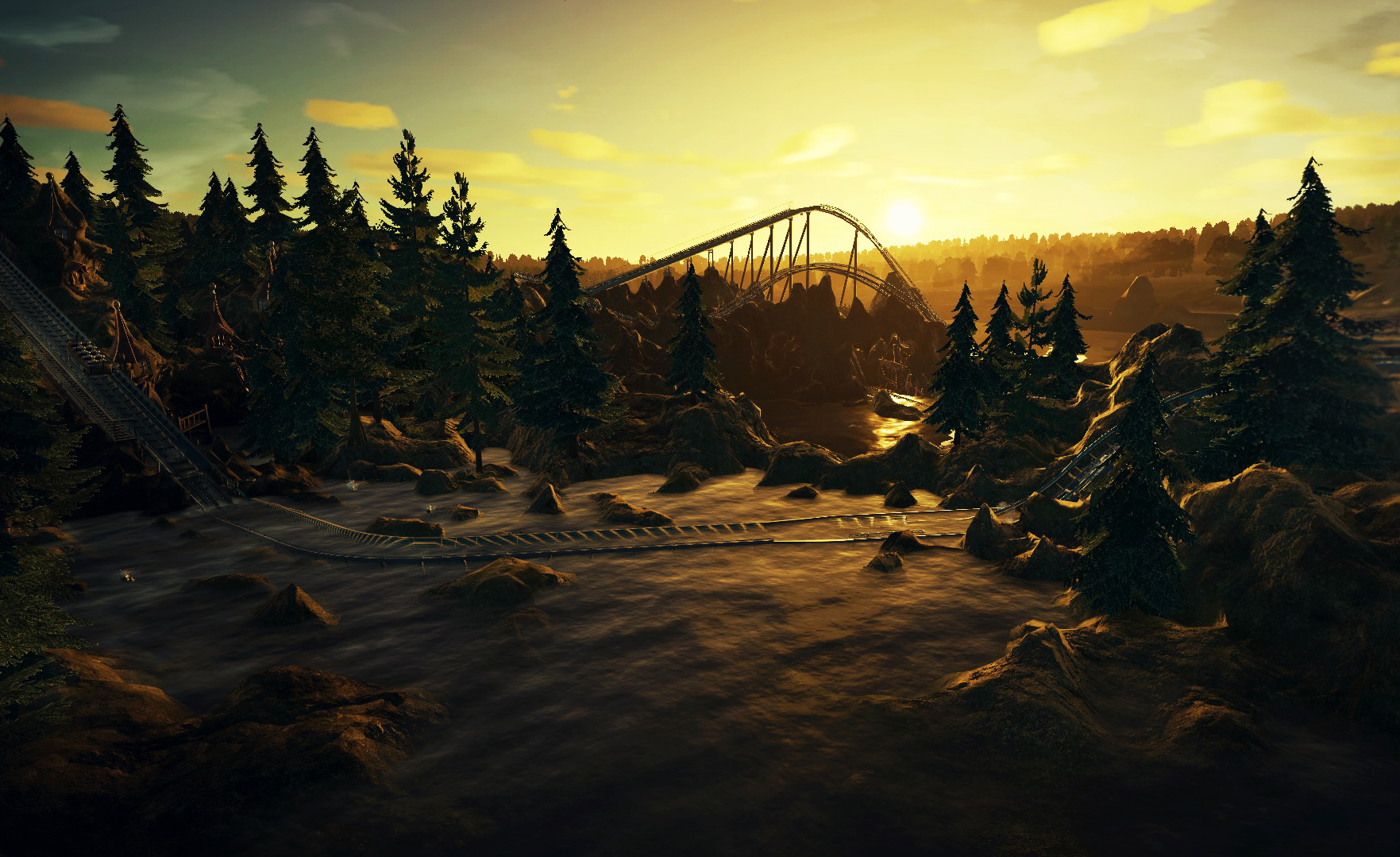 Hey folks,
I present to you one of my latest indoor coaster innovations: Buzz Lightyear's Flight !

Take a flight with Buzz but beware of Zurg!

The coaster is kinda mixture between Space Mountain and Buzz Lightyear's Laser Blast!

I hope you enjoy the ride