MakoMania wrote:Staff have started to ride Tigris, opening date announcement can't be too far off now!

And now we have it, Tigris will open Friday 19th April!

It has also been announced that pass members receive 2 hours of exclusive ride time (8:00am-10:00am) on Tigris, SheiKra and Stanley Falls Flume during the first two weekends of May. I know a lot of UK enthusiasts have passes to the Florida parks so enjoy it if you are there!

Purple track for the new 210ft RMC hybrid coaster is now on site at the park as well!
SeaWorld has rescued over 35,000 animals in need![/i]
Top

Please link your sources - be good to see the track!
Top

Chris wrote:Please link your sources - be good to see the track!

I had a friend message it to me, but Midway Mayhem have pictures on their facebook page now as well! Purple is certainly something different for the park!

The park have announced that Tigris will be soft opening on Tuesday (today) and Wesnesday ahead of the official opening on Friday. Thursday will most likely be media day.
SeaWorld has rescued over 35,000 animals in need![/i]
Top

Midway Mayhem have a video from the front and back.. not gonna lie, for a short ride it looks like it packs a punch!
“A surprise to be sure, but a welcome one”
Top 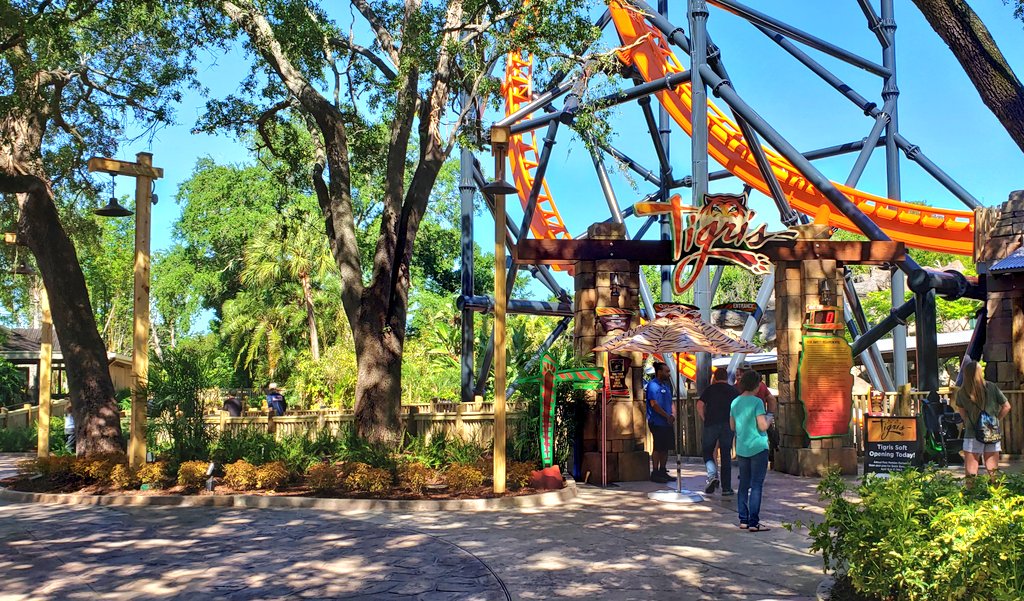 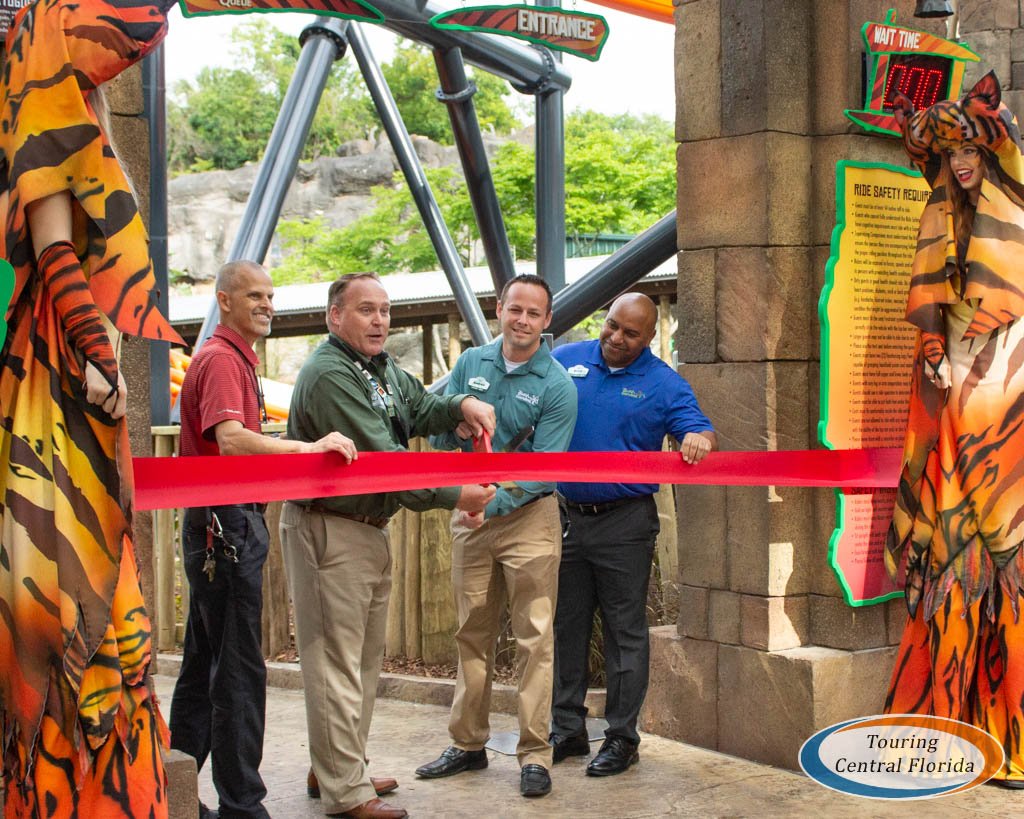 The ride queue was posted at 120 mins on opening morning, but it seemed to take people no longer than 70 minutes before they were on the ride from the start of the queue line.

Like most of Busch Gardens Tampa, the ride does not feature extensive theming, but it is probably the best themed out of SeaWorld's 3 Sky Rocket II coasters. Whilst is it not as well themed as Cobra's Curse, Tigris has more theming than rides like Falcon's Fury, Kumba or SheiKra. It has some great rockwork and landscaping as well as original themed audio which is a nice touch.
SeaWorld has rescued over 35,000 animals in need![/i]
Top 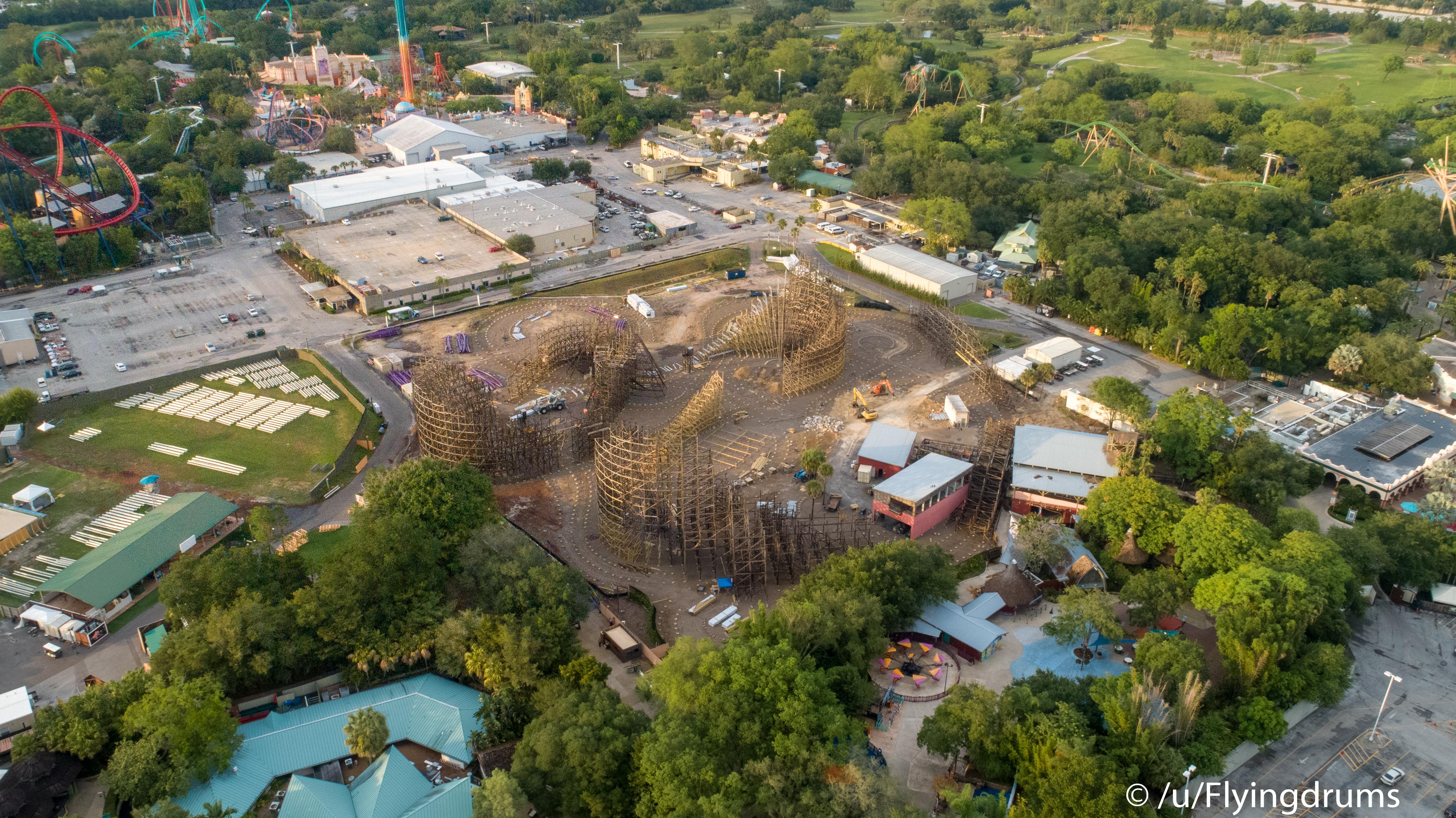 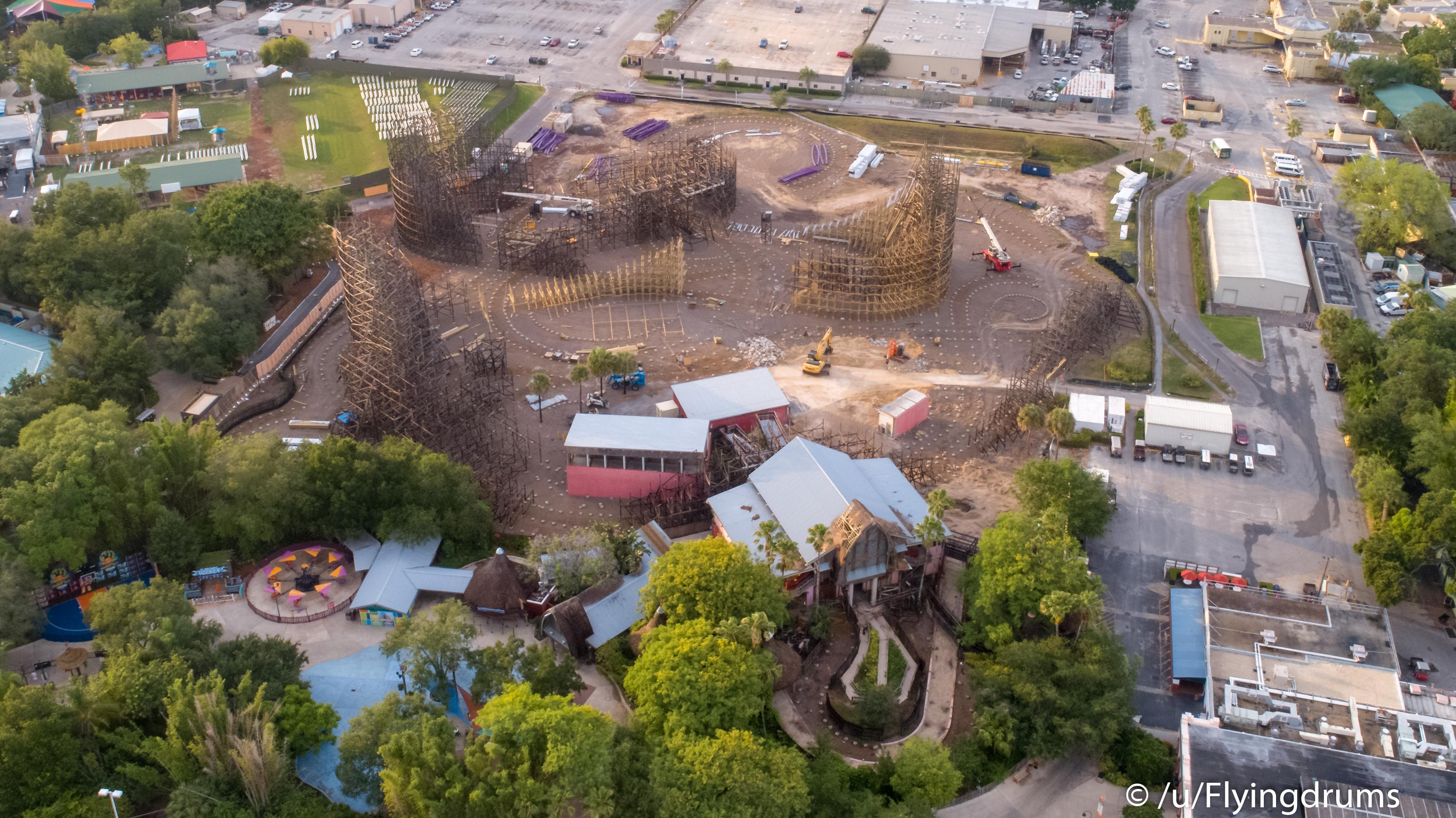 Busch Gardens Tampa have announced the full lineup for this year's Howl-O-Scream. The event will run on select dates from September 20th until November 2nd (7:30pm-1:00am each night) and will feature 6 houses/mazes, 9 scare zones and a live show. Tigris, SheiKra, Kumba, Falcon's Fury, Cheetah Hunt, Montu & Cobra's Curse will also be open during event hours.

The scare maze lineup includes 5 returning mazes and 1 new maze. New for 2019 is The Residence, whilst Insomnia, Death Water Bayou, Simon's Slaughterhouse, The Black Spot and Motel Hell will all make a return.

All 6 of last year's scare zones will return (Hell on Wheels, Maniac Midway, Deadly Toys, Día de los Muertos, Meat Market & Camp DOA) and 3 additional zones will be offered, bringing the total up to 9. The new zones will be called Little Nightmares, Carpe Noctem and also First Fear which is a special zone featuring old characters from past years of Howl-O-Scream to celebrate the event's 20th anniversary this year.

Last but not least the ever popular Fiends show will return in Stanleyville Theater. This is definitely not a show suitable for kids!

Single night tickets are currently $39.99 (were $29.99 recently, will probably go up a bit more) which is great value for such a huge event, making it cheaper than if you wanted to do all the Scarefest attractions at Alton Towers ($50 not including theme park admission).
SeaWorld has rescued over 35,000 animals in need![/i]
Top

Iron Gwazi has been revealed to be coming to the park in 2020.

With a 206ft and 91 degree drop, it will be the tallest and steepest hybrid coaster in the world, along with the fastest at 76mph. The ride will feature 3 inversions and 12 moments of airtime, however with a track length of 4,075ft and a ride time of 110 seconds, it’ll be a short but sweet experience.

Most shocking seems to be the current height restriction seems to be being touted as 48”, about the equivalent of a 1.2M Ride in the UK! 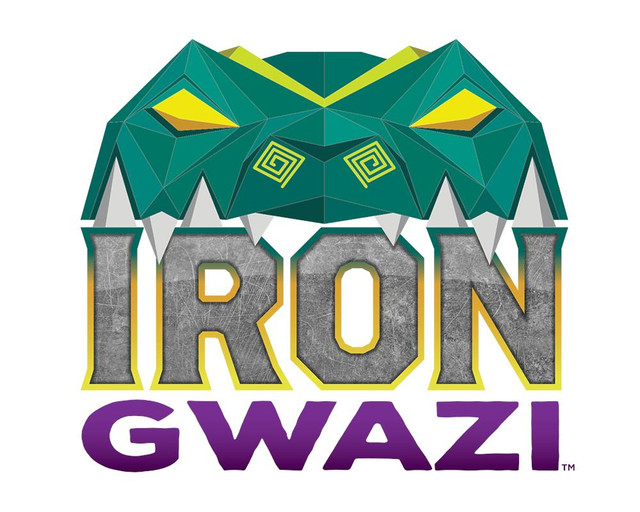 I'm so hyped for this! I'm visiting Orlando this time next year so can't wait to ride it! I was really hoping for a POV at the press announcement though
Top

As good as the facts about the ride are, and the name is pretty decent.. why on earth is it themed to a crocodile? Gwazi.. a Tiger/Lion Hybrid.. now a crocodile?? I'm confused with this choice, but looks good none the less :lol
“A surprise to be sure, but a welcome one”
Top

Here is the official announcement video for Iron Gwazi from Busch Gardens Tampa:

In some ways I do kind of like that the name still incorporates the word "Gwazi" as a nod to its predecessor. However what I don't get is the use of the Crocodile theme as Gwazi is meant to be a legendary creature which is a lion/tiger hybrid (as Mentions by phNx Survivor). Whilst it may be being marketing as North America's tallest and steepest hyper hybrid, the stats only beat Steel Vengeance by the smallest of margins - e.g. it is just 1ft taller!

Having said that, it does look like an incredible ride and it's only making my desire to get back to Florida even bigger. I seriously need to try and find a way to get back out there soon!
Top

The ride trains for Iron Gwazi were unveiled at IAAPA earlier today. 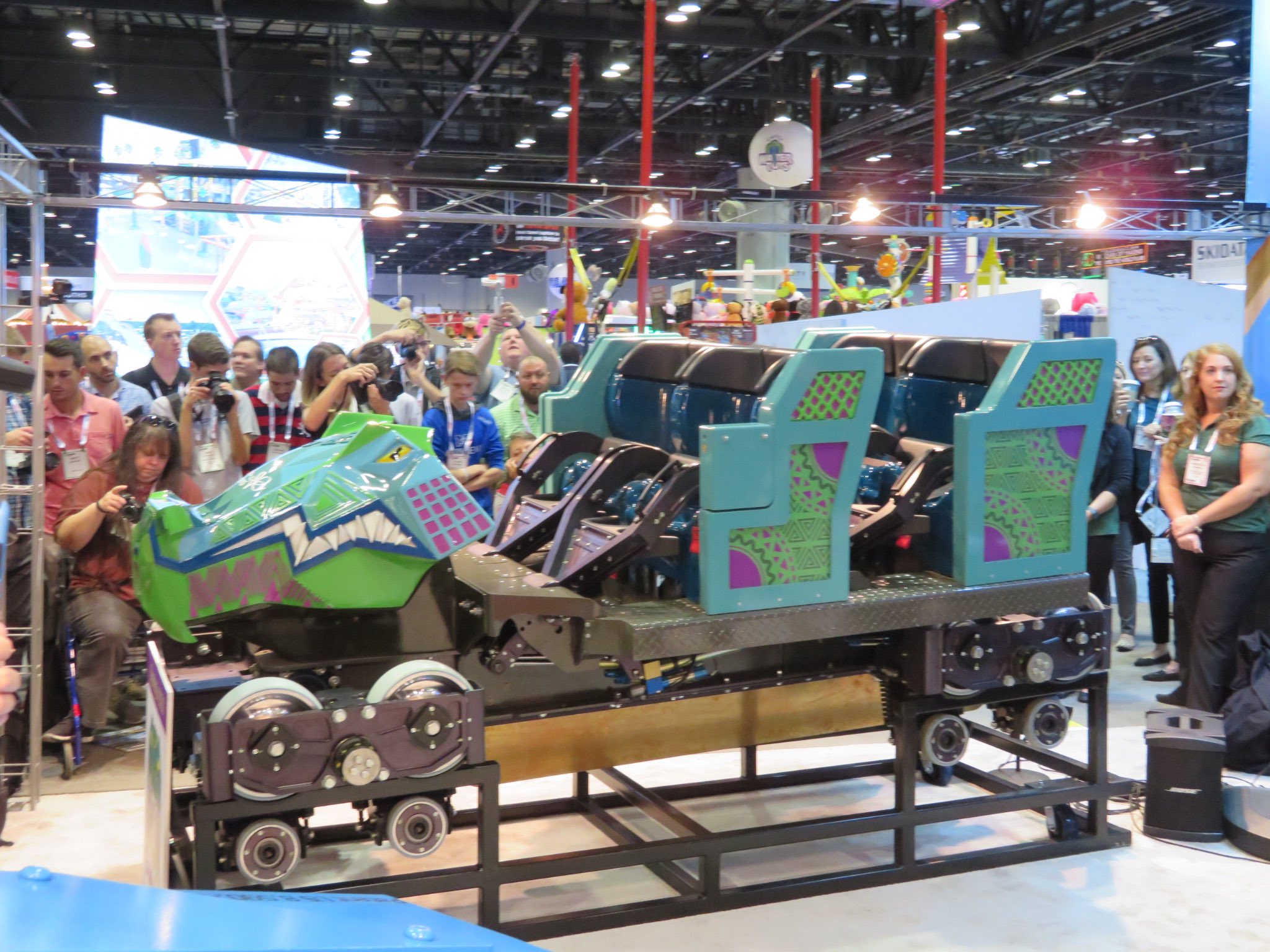 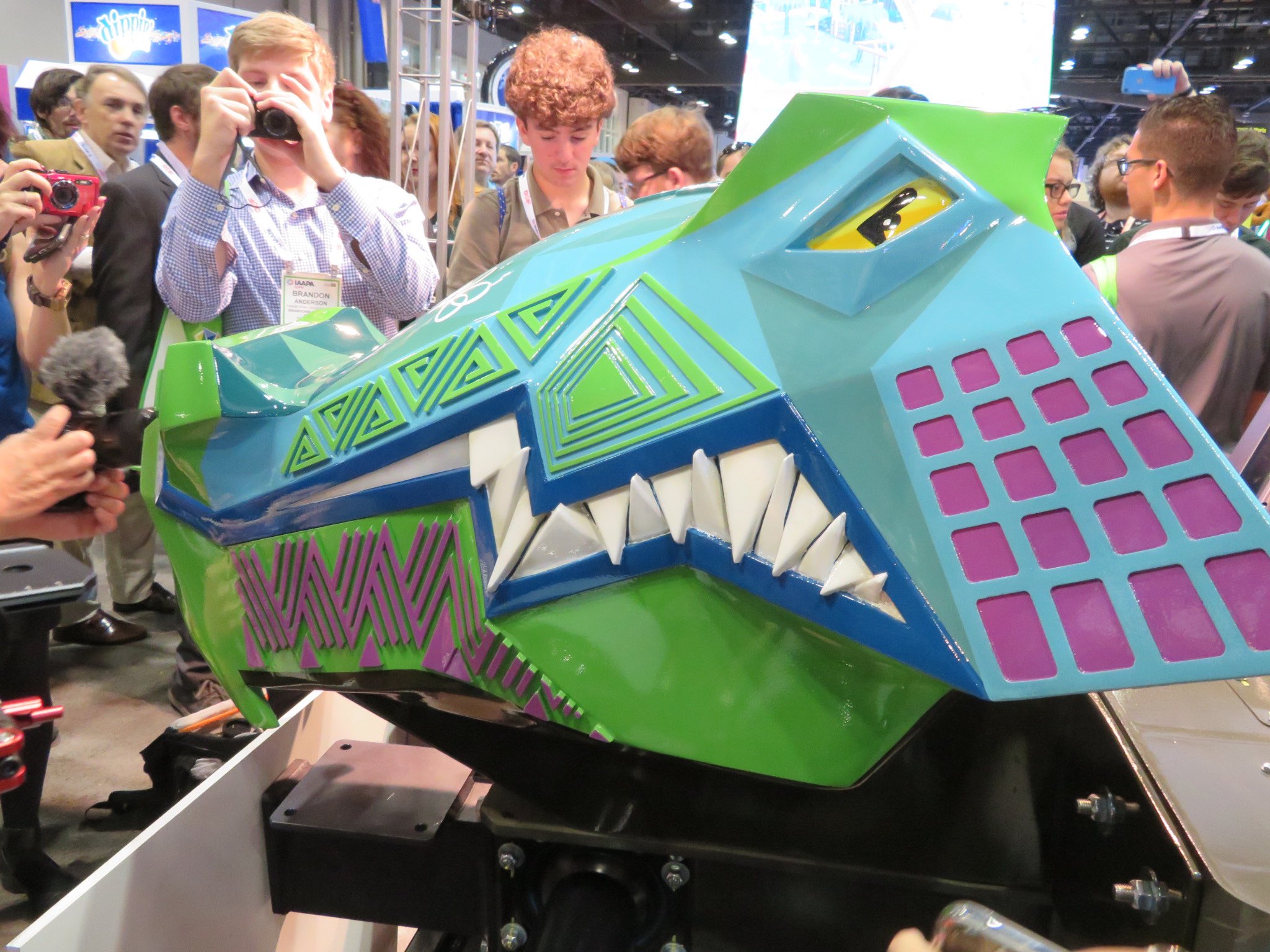 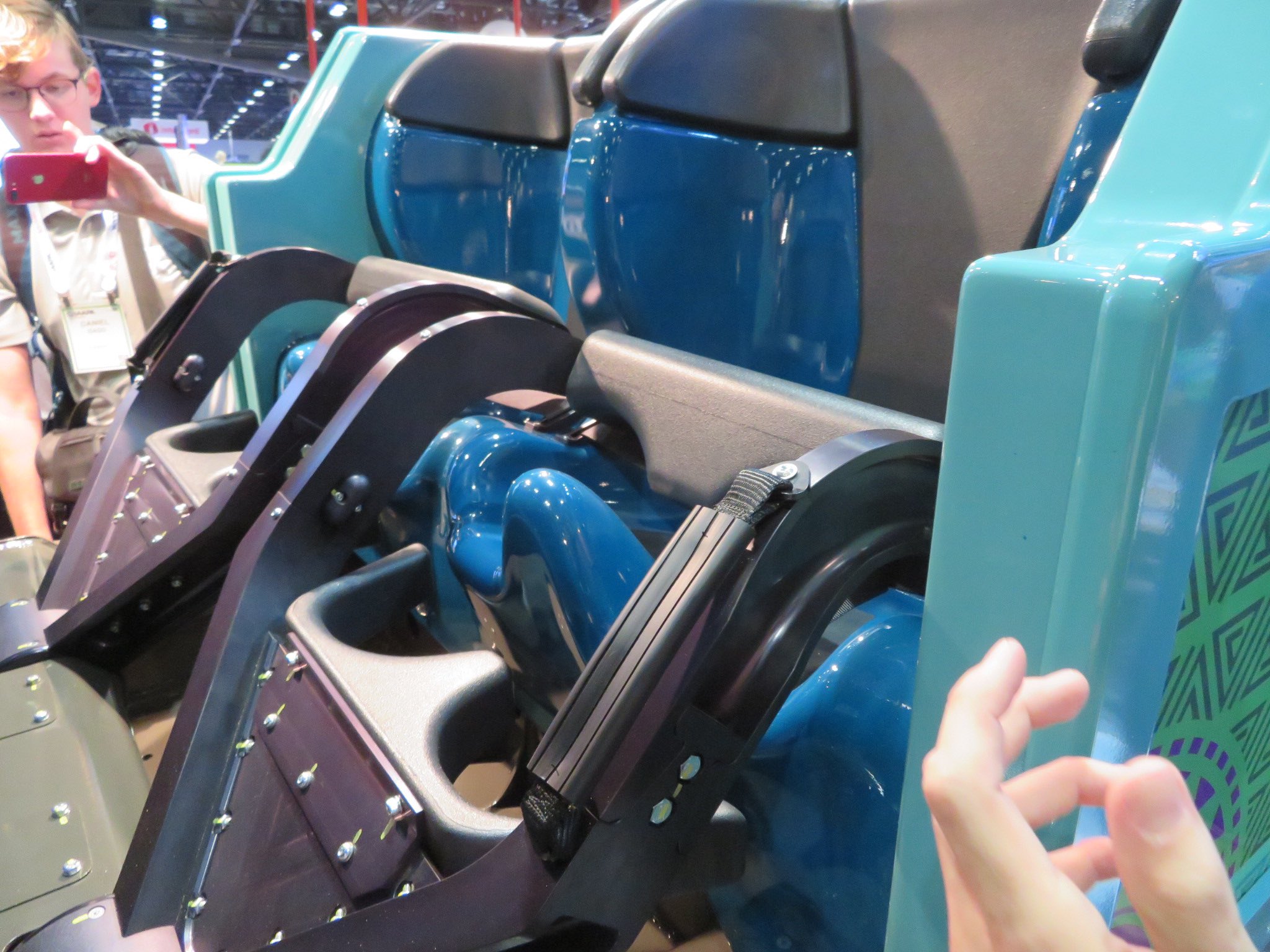 I have to say that at first glance I'm not a huge fan. There's just something about the whole thing using a crocodile theme that isn't sitting right with me. Also, it's difficult to tell, but it looks like the restraints are similar to those used in Steel Vengeance which whilst most people will find them ok, some people aren't so keen on them.
Top

I like how vibrant they are, but still don't understand why a crocodile would be flipping in the air?

This is the new restraint design first featured on Steel Vengeance, and all models since such as Twisted Timbers and Zadra. Generally comfortable apart from on your shins if you are over six foot tall!

Chris wrote: Generally comfortable apart from on your shins if you are over six foot tall!


Agreed, I massively struggled on Zadra!

Definitely going to be worth a visit

Looks immense. Are there no trim brakes at all throughout the whole ride?
Top

Trims on an RMC? Absolutely not!

I don't think it looks as good as Steel Vengeance due to being generally shorter, but it does have the pacing benefit of not having the mid-course brake run.
Top
Post Reply
619 posts