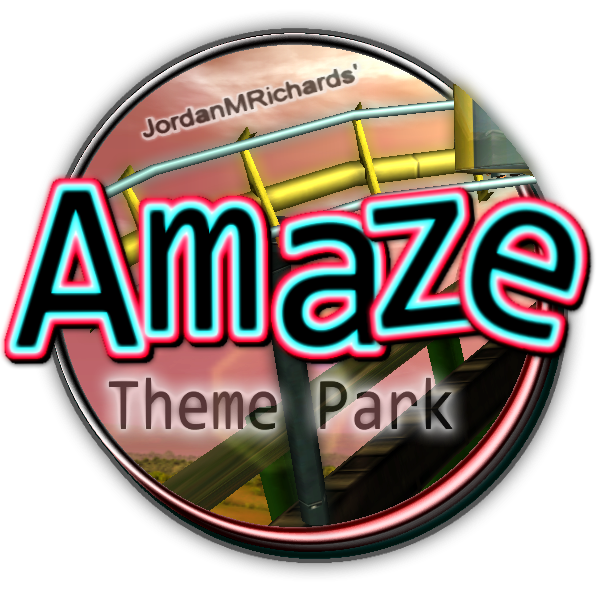 It was 2010, things were changing, debates were commencing. These debates were not like any old debate, this debate was about the fate of the land.

Towards the west coast of Wales, July 2010, was a piece of un-touched land. They called it 'no-mans-world', because they thought no one owned it, no one went there and no one cared - at least for that month.

A man named Jordan Richards came along looking to open up a business franchise for a laser tag company. He was looking for a spot of land to start building the grounds for the ultimate laser attraction. Unfortunately for him, his application got denied with the notice "NO ROOM". After that he lost all interest in the franchise market and decided he wanted to do something bigger, something better, something AMAZING. That's when he got the idea, the idea of the UK's amazing adventure, the idea of Amaze Theme Park! 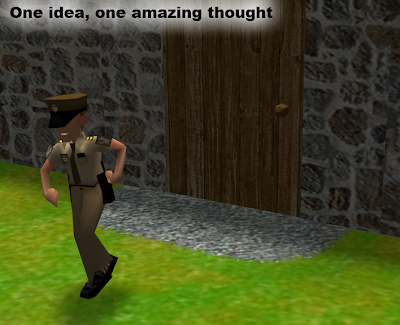 Now he really wanted to find land fast, as room was running out. He went through file, by file looking for room to start building. He was also looking for support in building such a place. One day, he was walking along the coast of Pembroke when he met a group of theme park enthusiasts. They did have jobs though, they were a mixed group of builders, cleaners and police men. All 10 in total (including Jordan).

The 10 of them went down to the planning office to check for availability again, declined with "NO ROOM". They all sat down in the office with a big sulk, the woman at the desk said "Why are you so bothered anyway and even if there was room, how would you get the money for such a place?". The 10 of them walked out in rage.

2 weeks later one of the police men with in the group said. "Hey, what about a fundraiser? If we got enough people to sign that they wanted land and a theme park made by us, we may stand a chance!". One of the cleaners replied "Yeah, but I don't think we'd get enough people". They started planning it all out. In the end the overall plan was to post letters through as many doors as possible in wales with the petition and an envelope to put as much money as they wanted towards the funds.

4 weeks later they started doing this, they set out every day, 9 hours a day posting the letters through as many doors as possible until 3 weeks later. By that time they were exhausted so they checked their mail PO box.

TO THEIR DELIGHT - there were hundreds if not thousands of letters singing the petition. They spent hours counting all the money out and sorting it into piles as well as gathering the petitions. As they looked through the pile, they spotted one letter, it had a red ribbon around it with a note attached. It said
Dear friends,
you may not know me, but I guarantee you've heard of me and nor do I know you. I am a wealthy guy, very wealthy, a star, very famous. I am a billionaire.

It has come to my attention that you are in need of land and funds, well I have a huge spot of land that I never use, it was a long-term investment I made a while back, when I was not as wealthy. I never use it now. Hey, you may of heard of it, people call it "no-mans-world". But anyway I am getting old now and I want to put that land to good use, so here, take the land (all the papers are attached with this note.) Also I have left a sum of money to help with the funding of the park.

I hope you and the park a great feature. Who knows, I may visit sometime, but I highly doubt it as I'm very busy, well see.

From
An Old Friend

They read the letter in disbelief. Then they read the papers, it was true! They then saw the envelope, inside being £50,000,000! They jumped and leaped around with joy, they were very happy. 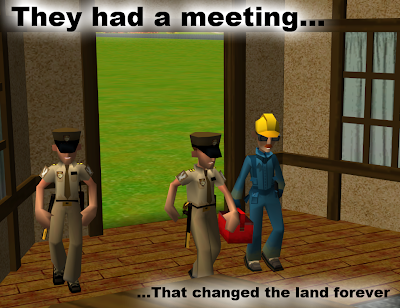 They then had a meeting. They looked at the land they had been given. They saw that the only way to get to the land was by a train built back in 2007. The train was run down, not in use and traveled INTO the mountains. The whole land was surrounded by trees and hills, so there was no room for a road. They asked the builder to help with it. He replied "I can get my crew to work on it. I'll need a lot of money though". Jordan replied: "No problem there!". They all laughed.

Weeks later the train was finally complete. It turned out that the main matter that the train was not fixed was money, because they needed new carriages.
. (The old ones were all rusted worn out and unsafe.) 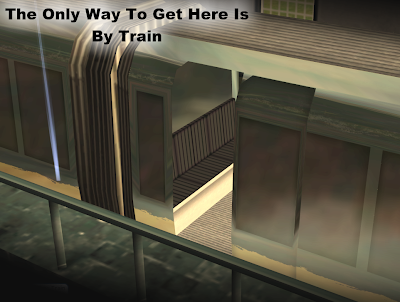 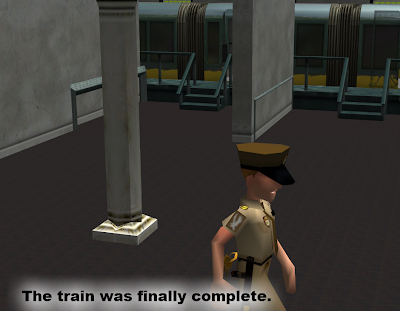 After the train was complete they all caught the train to the land they had been given and froze in disbelief when they saw it.

It was time to start the construction, they got to work and the park is coming! Amaze Theme Park Is Coming! 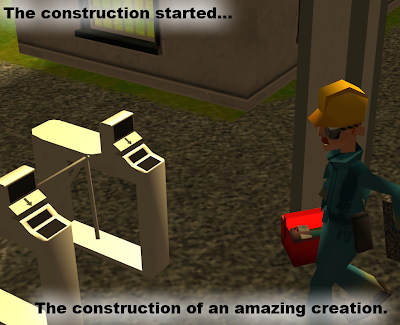 After they had got to work on the main entrance they sent out this promotional poster around the UK. Advertising it as "An AMAZING UK theme park" - word-play. It was good thing Jordan was a graphics designer. He made the poster and the main park logo. 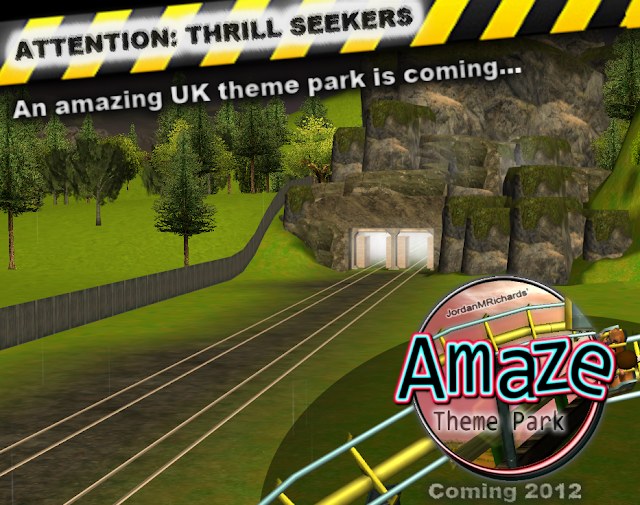 I hope you are looking forward to my first ever RCT3 park! Make sure you check back often to receive the latest park news!

Being number two is just being the first to lose.
Top

Can't wait to see the construction side of this. I remember it from a LONG time ago

A local news group who tend to like writing news articles have managed to gather some information together.

As we know it, Amaze theme park is coming to Wales. But the questions remain. When will it open? What will be there & what has been constructed?

We have yet to find the opening date to the theme park, but I'm sure you'll see some marketing once that is released.

The JMR marketing team are now working on a new park logo, along with posters, signs and more to suite the new Amaze Theme Park plans. These plans consist of a whole brand new layout compared to the drafts, so it should be exciting!

Along with this, we managed to just sneak our heads in via our helicopter over what appears to be the park entrance. Sadly we have yet to train pilot. Maybe we should get the Towers Times Pilot - M17 to teach him. Either way, here it is. 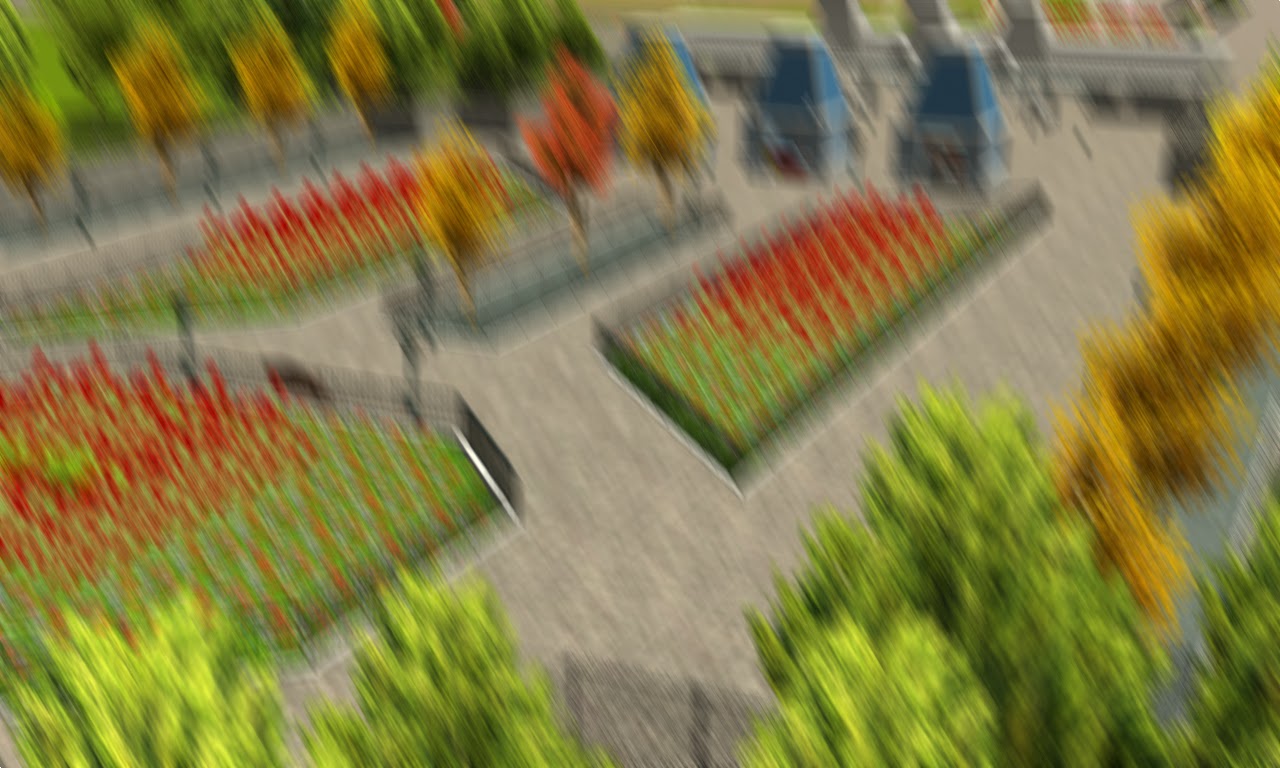 We can also confirm that the train has been tested and is stable. So there are no current plans to use any other method of transport to get to the park. Probably because the highway is very far away from the actual park.

That's all for this update. Thanks for reading.

The local news group managed to gather some more information.

One month in and we have managed to collect some more information about the new theme park coming to wales.

The main entrance is now complete! Now it's just knowing what will be built next!Well, it turns out, the plans consisted of a large mainstreet! After speaking with a guest satisfaction adviser, who has worked at a total of 15 theme parks in his lifetime. He managed to get hold of JMR who then told him that the mainstreet will consist of Food, drink, gift, toy and snack outlets. As well as a spectacular view over the lake, from which firework shows can take place.

Speaking of this mainstreet, we managed to train our pilot to fly more steadier than before, which resolves our photo motion blur issue. We aren't technically allowed to fly over theme park grounds, but we couldn't resist. So here's what we managed to grab whilst only just making it unseen from the security. Notice the mainstreet in the background. It looks like it's coming on nicely!


That's all for this update. Thanks for reading.

If the rest of the park is as good as this we're all in for a treat! Amazing work

This is fantastic! This is one of the nest park entrances im seeing on the forums!