I went in 2012 as I was staying at Butlins. I feel the reason this is like this because Skegness town centre is about 4 miles away and I bet a good % of visitors are guests from the Butlins camp and why would they spend lots of money here when all the rides on camp are free. I don't think the market does the place any good as there were a lot of people around but most were there for the market. I think the cheaper traveling fair which was across the road was more busy. I don't know how much it is to ride the 2 main coasters but during my time there I didn't see them go round much.
Top

Jubilee Odyssey has the same problems as the big one in not going round when it is windy but I don't know about Millenium Coaster. I want the park to be saved purely because The Millenium Coaster will be scrapped. It was designed to go around the parks perimeter unlike oddyssey which was planned and plonked and is compact enough for any park. If it was to close could drayton manor or lightwater valley snatch odyssey. I forgot what there restrictions are but it would be a good investment if available on the cheap.
Top

I was there last week and Odyssey & Millenium, without a wristband, are only £3.50 each to ride. I know this is really good and could attract people but it may be a bit cheap for 2 of the UKs biggest coasters... And I also think the Market doesn't do the park much good.. It sort of pulls it's reputation down a bit. It would be so much better if the market moved over the road and was completely sepperate, but still there. Then they could expand the rides properly, as I agree with above, how Millennium was built to fit the park yet Odyssey was just plopped there because they needed more guests! The park in general is just a bit messy and clearly hasn't been touched in a while (due to no money hence administration I guess) but this park has so much potential and I'd hate to see it go. The millenium is one of the smoothest Vekommas in existence I believe, and from riding it I think it is pretty smooth too. And the odyssey is one of the mots underrated coasters ever! And it has a great line up of flats!

I'm sad about this as Jubilee Odyssey is one of my favourite rides in the UK, plus living an hour from Skegness I spent a lot of my childhood with my great aunt going on the rides and around the market.

Really hope it gets saved.
Top

This topic can be used to discuss all developments at Fantasy Island. Doe Anyone Know What's Happening With Fantasy Island Since They Went Into Administration? I'm Supposed To Be Going In October.
Top

Its been given the green light. it said on their Facebook page that they will be open for years to come:)
Top

Lacking anything better to do this weekend, I went up to Fantasy Island to try out a couple of roller coasters that had been on my list for some time: Millennium and Jubilee Odyssey.

Fantasy Island was opened in 1995 as something to do for the unfortunate masses that holiday in the area. It consists of a number of attractions for all ages, including rides, children's' entertainment, and an oppressive shopping market. The overall feel of the place is not great.

Millennium is a Vekoma MK-1200 with a custom layout, opened in 1999 to celebrate the upcoming millennium. At 56 mph it is the seventh fastest roller coaster in the UK, and is also the fourth highest in the UK and features an astonishingly tall loop.

The ride experience overall was good; it was very smooth, probably thanks to the new trains, and there was little in the way of queue. It's not a particularly thrilling roller coaster, but a nice experience all the same.

Odyssey is a Vekoma SLC with a custom layout, built in 2002. The layout is broadly similar to Infusion at Blackpool Pleasure Beach, however it has been stretched upward to make the ride 167' feet tall, making it the third tallest roller coaster in the UK after the Pepsi Max Big One and Stealth. The first drop is 141', during which the train collects an impressive 65 mph - making it slightly faster than Rita Queen of Speed.

Odyssey was closed most of the day due to winds, opening around 5:00pm. Just like Millennium there was little in the way of a queue. The ride experience itself is pretty intense, and also a little bit painful - like its other SLC brethren, Odyssey is a bit of an earbasher.

While waiting for Odyssey to open, I rode some of the flat rides at the park. They are, by and large, travelling funfair rides that have been erected on the site on a semi-permanent basis. Some effort has gone into theming the rides, which makes their overall appearance better, however the layout is a bit chaotic to say the least.

I rode a number of other rides, but three were particularly noteworthy.

Volcano is a 200' tall S&S Power Space Shot. The ride experience is pretty standard for a ride of this type, and there is a great view from the top of the Lincolnshire coastline. Overall very enjoyable and not at all scary.

I have a soft spot for wild mouse roller coasters. Fantasy Mouse is steel mouse with spinning cars, like a cross between Alton Mouse and a Waltzer. In fact, the layout is identical to the Alton Mouse. Approximately half way around the course the spinning mechanism on the cars unlocks just before a meandering section of flat turns and they spin wildly.

The Beast is a Mondial Top Scan, another ride that I have a soft spot for. Expecting an experience similar to Samurai at Thorpe Park, I was in for a big surprise! The Beast is a fair bit quicker than Samurai, the result of which is being hurled off into the sky feet first on more than one occasion. This is not a ride for the faint hearted and I came away feeling a little green around the gills.

I might go to Fantasy Island again at some point, but it's not worth the 2 hour journey when I could get to Blackpool, Flamingo Land or Lightwater Valley in the same time.
Top

I went to Fantasy Island a few months ago and everything was open. Verdict was ver similar to yours; I was pleasantly surprised with Millennium. Very smooth for a Vekoma and it's also a very well maintained coaster.

Odyssey was impressive... but horribly rough. I did love Amazing Confusion though. Great thrill ride!
Top

Fantasy island have posted on social media earlier today that the Odyssey roller coaster (a vekoma SLC) is to be getting a makeover. It is set to get a repaint to a yellow track and grey supports, unlike its current colour scheme of red track and white supports. 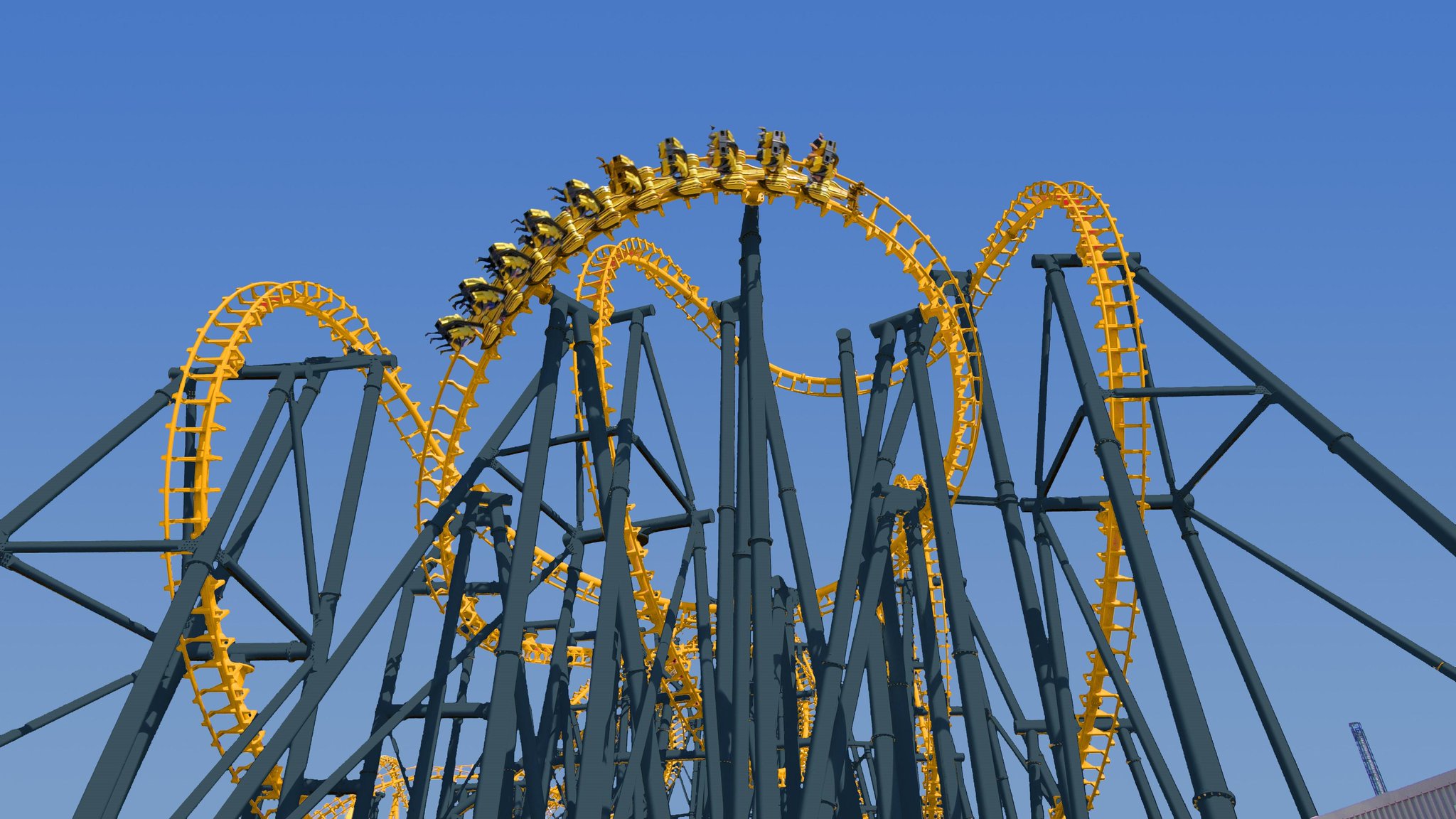 Hopefully they will also do something to make it less rough too!

That's great. Now scrap it and put something rideable there.

If it wasn't as rough, I'm sure a lot of people would rate it highly, great layout, but the roll is painful. Time for me to start looking too far into things... They called fantasy mouses repaint a repaint, but this is being called a makeover, anything more than a repaint?

I read somewhere on social media (nowhere official so don't take this as a fact) that it would be renamed/themed to something about bees, which I like because bees are wonderful. Shame about the roughness of the ride itself though :lol
Top

We've already got queen bee at bottons down the road

Ryan.B wrote:We've already got queen bee at bottons down the road

:lol don't get me wrong, that was my fav ride when I went to skeggy a few years ago when I was younger, but now I wouldn't want to be seen dead on it... :lol

NemeJaney wrote:I read somewhere on social media (nowhere official so don't take this as a fact) that it would be renamed/themed to something about bees, which I like because bees are wonderful. Shame about the roughness of the ride itself though :lol

And it is a shame about the roughness. I never usually get headaches on coasters but after 2 rides straight after each other I had a slight headache ](*,). Also I've got a feeling that they would have announced the name change/re-theme when they announced its 'make over'
Ride count since the beginning of 2015: 2243!
Ride count 2021: 24!
Cred count: 117!

Ryan.B wrote:If it wasn't as rough, I'm sure a lot of people would rate it highly, great layout, but the roll is painful. Time for me to start looking too far into things... They called fantasy mouses repaint a repaint, but this is being called a makeover, anything more than a repaint?

I'm sure without the odyssey there wouldn't be much change in visitor numbers. It has lots of negative thoughts towards it and when I went in July I was the only one on it most of the time. And it was the weekend during summer hols...
Ride count since the beginning of 2015: 2243!
Ride count 2021: 24!
Cred count: 117!

I think it's about time they did something with the colour scheme as the red/white track & supports just doesn't go with the yellow & black trains, so at least this will go somewhere towards it looking quite decent.

They still need to do something about the roughness though as on our visit to Fantasy Island in August by mid-afternoon it was virtually un-rideable.