Like Chaz, I wasn't sure I'd like it but I was pleasantly surprised by Shrek's Adventure and was impressed by the attraction as a whole. Although it's mainly aimed at kids, I think people of all ages can enjoy it and it is a nice addition to the South Bank.

Really, it shuts at 6pm on a Saturday? There were so many tourists walking past, Merlin could've made loads!! Same with Dungeons and Sea Life.
Top

This has long been a pet peeve of mine for the London midway attractions. They can do it for the Eye - why not the other ones?
Top

I went for my second visit yesterday (first time I used free ticket from the Sun, this time my Annual Pass). I was in a bigger group which was better for atmosphere (20 or so compared to less than 10 the first time) but still don't think I'd like a full group. The Christmassy elements were nice but not overplayed - I did like getting my photo with Christmas Shrek.
I don't remember the overhead camera the first time (to make the photo on the bridge with the dragon). The bus is broken already though - no movement. I noticed this on the MAP website when I was checking some details but don't recall signs at the attraction (like there were for the drop tower at the dungeons). Not sure the problem but the safety bars didn't even come down.
They have reduced the prices on the photobooks already too - now £25 including the magnet and keyring and stickers (£20 with MAP).
All in all a fun day but it still seems to be struggling for visitor numbers
Top

Fiyero wrote: The bus is broken already though - no movement. I noticed this on the MAP website when I was checking some details but don't recall signs at the attraction (like there were for the drop tower at the dungeons). Not sure the problem but the safety bars didn't even come down.

I beleive the reason the bus is no longer moving is because it is causing damage to the building. Hopefully they will get it sorted and it will be back to normal soon.
Top

According to Shreks Adventure on Facebook, the bus is now back up and running and.................that Donkey made the repairs.
Top

Aside from that everything else was worse than my previous visits too. This was my first visit on a Weekend and the first time I've been 'penned' before the green screen. Sleeping Beauty was absent which meant no scene before the bakery and the mirror maze seemed more rushed as the muffin man had to come get us. There was also only one lift back from the photo sales to the shop which delayed us and really delayed the second half of my group (who hung around in the photo-op area) as after waiting for the slow lift had it taken by some people who pushed in front!

We got a good rate (Scout Group), if we had paid full price I would be even more disappointed.
Top

I visited a couple of Saturday's ago for the first time. Certain aspects I really enjoyed, but overall I was unimpressed with the whole experience.

So, as mentioned above we were moved from pen to pen in the entrance before the first green screen. Queued for about an hour to get to this green screen. Then a lift and walk and you're into the room filled with luggage and another photo op with Donkey. Another 30 minutes before we got to Donkey.
Then, quite possibly one of the most annoying actors I've ever met in my life reads the rules in an ever so slightly comical way. The 'Shrektacular' is totally overused to the point the kids were getting bored and just found him rather strange.

Another short walk and we meet Fiona, who was great and got the whole group singing to get the magic bus working. Then for my favourite bit. The bus was fully operational and a really impressive ride! Thoroughly enjoyed the whole ride experience.

Then on to Sleeping Beauty by Shrek's outhouse. Now I did find her interacting with a man in the group rather funny, but didn't understand her story, and the fact she spoke using mainly text language. Didn't really connect with her as a character and the scene all felt rather rushed.

Moving on throughout the scenes it did improve, the acting got better and I laughed a lot more. The scenery was all very impressive and effects all seemed to be working as they should. Finale seemed a slight anti climax, but who could resist getting a picture with Shrek at the end

Liked meeting King Julien and the DreamWorks photo opportunities.
The photo book was a nice touch, but so unclear! We were handed it so assumed you were given this for free. Silly me, I soon remembered this was operated by Merlin. We decided against getting the book and swiftly moved to the only operating lift.
Non acting staff all very polite and helpful, but it all fell a bit flat for me and family. I know it's not aimed at me but even the kids noticed it fell flat in parts. I'm not sure if it's the scripts they're given that's the problem or their improvisation, but hopefully I just had a bad run.

Done the other London Merlin attractions later which overall made a good day out.

I did this for the first time yesterday and I think its awesome. Right from the start its incredibly immersive. The story is very good and ideal for youngsters. It is very much a family friendly attraction as they encourage the kids the be at the front and the actors ask the adults to go the the back. Overall its just a fun, happy attraction and if you don't come out with a smile than your a grump.
Top

It appears that something is arriving at Shrek's Adventure soon.

It's safe to say that due to its recent reemergence in pop culture, it can be assumed Bee Movie will be arriving as a part of the finale room soon! I sure do hope its Bee Movie related, I can see the memes already.....

I have yet to visit Shrek's Adventure, so I'm excited to see what happens in the future and hopefully I'll get down to visiting it!

According to all known laws of aviation....

I don't think it's been mentioned but the bus no longer moves and the bars were removed last time I was there so not a temporary thing this time. I think the issue was getting everyone in and the bars down in a timely manor.
I am trying to book another Scout group trip and have been told I can only book 30 per session, I am sure the bus fitted 40 so am not sure what has changed (I was hoping to book out an entire session)
Top

The bus was made stationary a long time ago not that long after it opened, due to damage the forces were causing to the building itself, not much else has changed
Top

I have had 3 more visits recently (a reckie and 2 Scout/Guide groups). None of the times were busy enough to need 'penning' before the green screen which was nice. There were no missing actors either. I really miss the bus moving but I guess if you didn't know it ever did you wouldn't miss it. The loading is a lot quicker without the bars! All the actors were on good form, though the photos with Shrek were odd - pretty much getting us to take our time getting ready then rushing us! (the second trip we had a whole session to ourselves as I had booked 40 tickets so we weren't holding anyone up!)
It does worry me that on 3 Saturdays in the run up to Christmas it wasn't at all busy! It might have just been our timing but I imagine it needs a good number of guests to keep going. They have changed the pricing structure for the photo books, £20 with an pass (£30 full price I think) then £2 for the digital copies - but you now get loads including halloween or Christmas versions (not sure what they'll have next). Digital copies are £15 if you don't buy the book so I didn't think that was as good a deal.
Top

Due to the COVID-19 outbreak, Shrek's Adventure has closed from today. 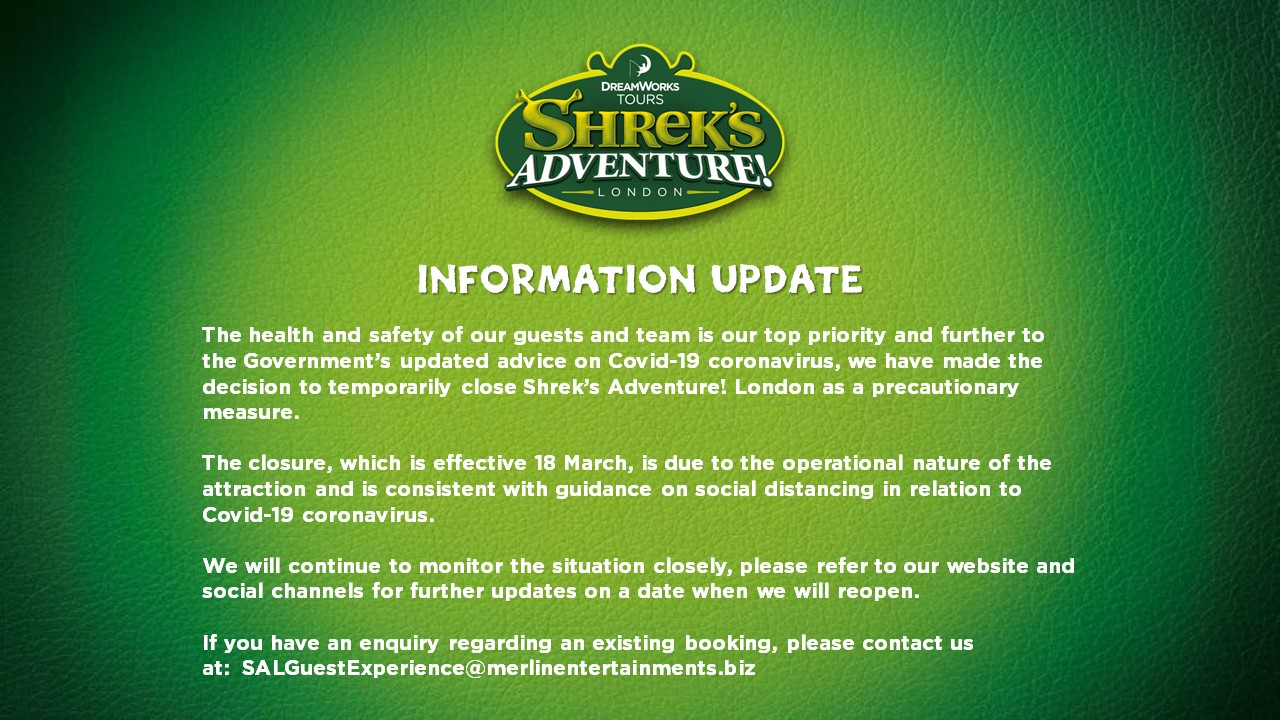