I doubt brave it backwards would return due to the health and safety side of it. I imagine this is just a stock image that Thorpe had that was best suited for the image.

Backwards was really good, but intense. I doubt they would ever repeat it now!
Top

I miss The Swarm's backwards rows, for some reason they seemed smoother to ride on, and in the event of a rainy day it meant you could still enjoy the ride without getting as soaked. I hope they do bring it back someday
Top

So Thorpe announced an offer this morning via social media which looks to be a really good one for those without a MAP or season pass. The offer is in until 31st March, which despite there lack of new offering this season (other than the events) should hopefully help bump the amount of visitors coming through the turnstiles up. If I didn’t have a MAP it would certainly tempt me.

I’m surprised about Stealth. I thought with it being an Accelarator, which have never been smooth, and the launch that the best would be front.

Wagstaff04 wrote:I’m surprised about Stealth. I thought with it being an Accelarator, which have never been smooth, and the launch that the best would be front.

@elc_themeparkofficial have shared this image of the 2019 Thorpe Park map on their Instagram. 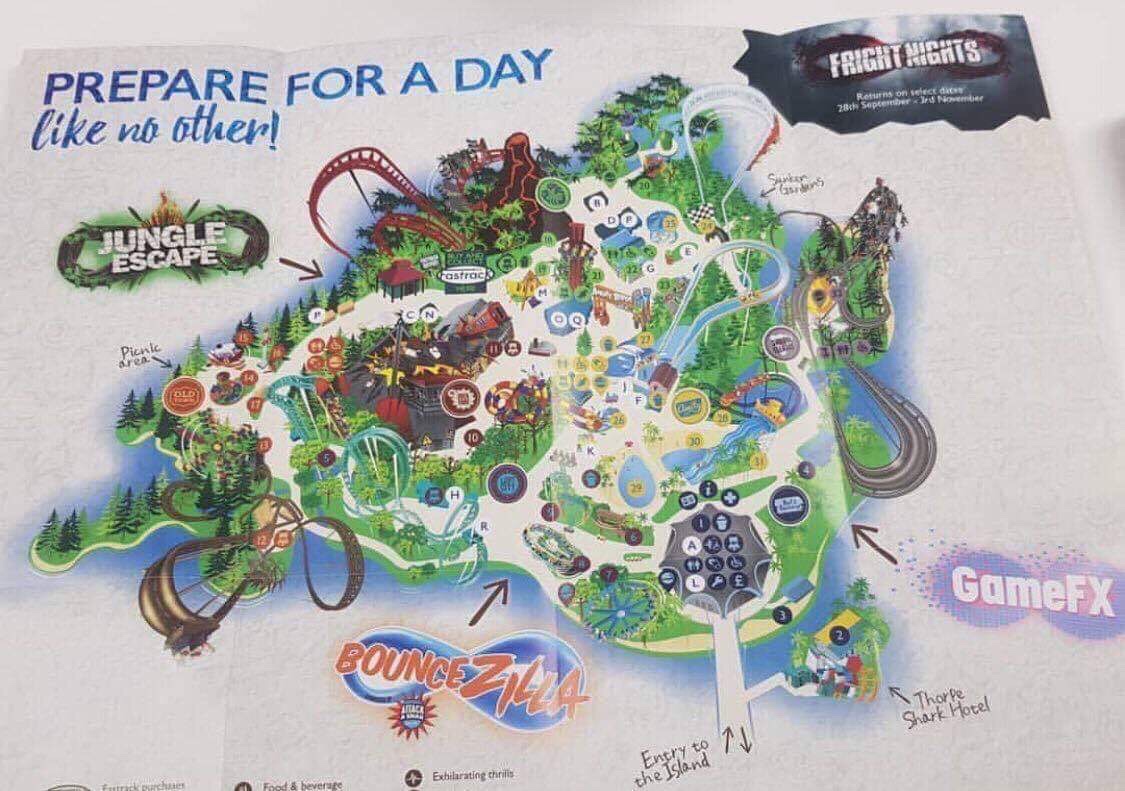 It's the clearest and most representative of all the park maps this year. Would appear that the Living Nightmare pin on the online map is just something left over from Fight Nights, as it's not mentioned in this map at all.


The back of it suggests that Walking Dead might be actor-less, which whilst not surprising, is disappointing if true.
Top

Having had a closer look, has anyone noticed that Saw:Alive isn't on the map at all?

Last year's map still had the attraction on the map even though it wasn't used until Fright Nights. Even Living Nightmare is on the online app and states it will return in 2019. Could this suggest that Saw:Alive will not be operating this year/ Fright Nights?
Top

That is interesting about Saw: Alive. Wonder if that means the maze is being retired? If it is it would be a shame to lose it with how detailed the sets are inside, however at the same time it has been there a long time and is probably due retirement.

I think with Stealth is its a bit of a mix. The launch feels more forceful at the back, so it kind of feels like your being dragged along and I totally agree with what Chris says about the top hat.
Top

Am i the only one thinking that this map makes the park look empty? It looks like its lacking any other rides other than the coasters. It could just be the colours they have used as they seem to merge into the background.
Top

I'd like to add that no matter where you sit it isn't very rough. It isn't as smooth as The Swarm but only has a rattle at the bottom of the top hat before the air time hill.
Please! No more IP's Thorpe! I'm begging you!
Top

Jack Silkstone recently did a video in which he was toured around Thorpe, which shows that Tidal Wave is now sponsored by Oasis.
Top

As shown in a video posted on the TTSP Instagram, Rumba Rapids has redesigned boats with entry gates, a higher back rest and a central grab rail. The rapids also appear more powerful than last year, making the attraction closer to its original Thunder River form.
Top

Was it just me or was the old music playing yesterday?
Top

I'm not going to lie, although it looks a lot more sleek, I am going to miss it. It was a flashback to the old times of the park. I can fully understand why the park decided to update the dome and it does look better. Not sure about that giant screen, but I guess it will be used for advertising things :lol
Top

The screen is perhaps a little unnecessary, given they already have one, which is brighter too.

We shall see what they have planned for it though.

WickerBoy wrote:Was it just me or was the old music playing yesterday?

We never ventured into the station. But it's quite possible there have been some audio changes at the park.
Top
Post Reply
10961 posts