General discussion regarding the UK's No.1 Theme Park. Talk about anything and everything Alton Towers here.
Post Reply
316 posts

As reported by TowersTimes Facebook; A UK trademark has been submitted for ‘The Alton Towers Dungeon’ by Merlin Attractions Operations Limited.

Could it suggest that Merlin’s iconic ‘Dungeon’ brand will be coming to Alton Towers in the near future? 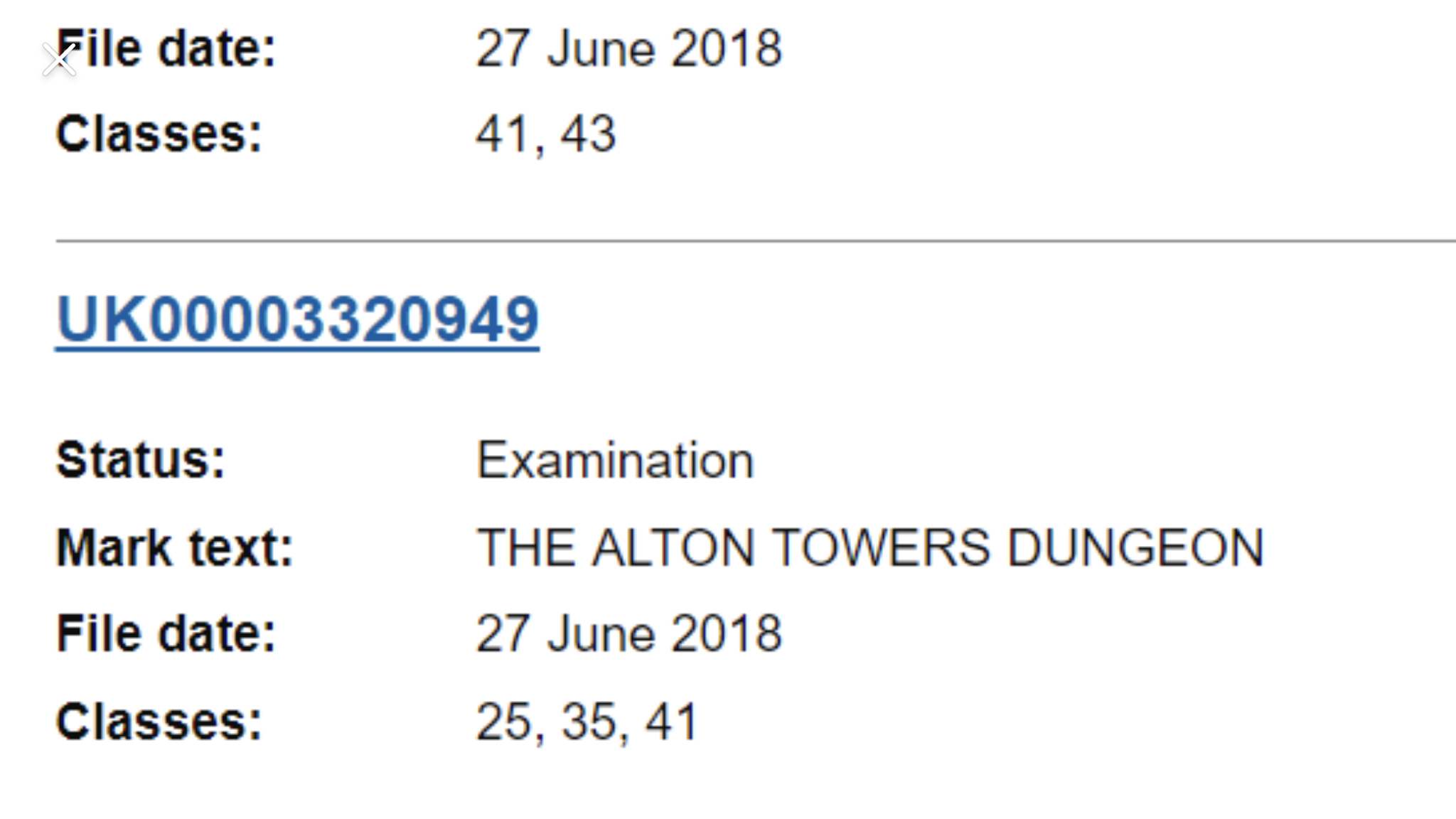 Whilst the Dungeons are popular, I'd rather they didn't install one at Towers. It's very much a "one and done" thing- I've only done two (Warwick and London), but they both use a lot of the same shows that lose the spark after your first run. I don't see myself doing another dungeon any time soon as they're quite frankly a little boring for me.
Having said that though, it's a surprise they hadn't done this sooner! Especially when you consider all the folklore around the estate and the fact that they have the ruins which would make sense location wise.
Top

Interesting where they intend to put it. Most appropriate place would be somewhere within the towers, but this would surely disrupt either Scarefest or Hex. Using the Sub-Terra building would be more convenient, but it wouldn't fit any of the theming.
Top

I must admit I quite like the sound of this idea. Look forward to hearing more. Could this be a potential life line for Nemesis Sub-Terra I wonder? Certainly hope so!

They have quite a few places they could put it. Charlie building or Sub building seem likely. I hope they don’t just do the generic Dungeon shows. I hope they intertwine some AT lore into the shows or introduce new shows based on AT lore as I think that would be quite a unique selling point to a Towers dungeon, plus it would be silly to ignore the lore and history the place can provide.
Top

I don’t think it’ll be in the Sub-Terra building. While it would kind of work because they already have a drop tower installed, the size and layout of the building doesn’t lend itself to an effective conversion into a Dungeons attraction.

My money is on it being in CCL and this being part of the retheme of that area for 2019.

I don't think it'll be a replacement of Sub Terra, although, I also don't think it'll be part of the retheme of Cloud Cuckoo Land either. I could see them maybe using part of the area of CCL, but having the attraction entrance be through an entrance into the Towers or Fountain Square, so that they could redevelop CCL with a more light hearted theme (rumoured Walliam's World etc.). I also have a feeling that it may just be a new maze for Scarefest. Guess we'll find out at some point!

It's very interesting and I've long wondered why they haven't already got one. I find it hard to imagine it outside of the towers though. I think with some reorganisation of the mazes there's plenty of space

This has really intrigued me, there's a few potential ways they could go with this. I think a usual dungeon up-charge is the least exciting idea. I think a seasonal attraction similar to I'm A Celebrity at Thorpe Park would be the best way to do it (although with a different experience). I'd rather see it in 2020 for the parks birthday to tie in to the local area.

I am in love with this and I can't wait to see it come off!

I have predicted a Dungeons brand coming to a park for a long time, however, I thought it would be Thorpe Park first. I still believe Ghost Train will be converted into a Dungeons when it is time!

I can certainly see this as an upcharge attraction, but remaining free for PMAP holders, similar to how Warwick run theirs. I also believe it will be a standalone attraction and not part of any area, and this will be in addition to a CCL retheme. I don't believe it will be placed in N:ST.

I think it will be in the Charlie building too, but for different reasons. It’s next to Hex and the Towers, so it would be easy to put all three together into one section on the map and the theming could flow between the three, if they end up doing a classic Dungeons style of attraction and tell the story behind the towers.

I have to admit, I’m not exactly certain what lore they would base the attraction off of. Maybe it’s my lack of Alton knowledge, but I thought the Towers had a rather clean history, and I think the most eventful parts are a battle that happened over the lands in 700AD and the events retold in Hex. They definetly won’t be retelling Hex’s story again and I don’t think one Viking battle is enough to build an entire Dungeons around - however I may be wrong since I have never done one. It was also once a hunting lodge but I’m pretty certain nothing major happened then either. Maybe they’ll tell the stories from other castles similar to the Towers (like the Alton Castle?) but then it isn’t Alton Towers’ Dungeons...

Personally, I think the best way around this problem would be to do an alternative history version, where it goes into the history of the park as if te backstories of the rides were true, and detailed side stories of them, such as the rituals of the Beoren, old artifacts from Th13teen’s crypt or explore recently discovered technology created by the Ministry of Joy. I don’t think this will ever happen, but it would be an interesting take on the old Dungeons formula and, if done correctly, could fix the re ridablility problem by creating Easter eggs. Plus, could be easily used to hype new SW rides by having a teaser room pop up.
Top

I was at the park today with a few theme park fans when this got announced, one of them got on the phone and talked to someone who apparently works in higher management. According to them it's going where Charlie is and will have its layout changed, with the elevator being the first thing you enter, being the 'decent' then a few walkthrough areas and then the boat ride. I don't know if any new rides will be added or if it will be an upcharge, but it certainly is an interesting development.

If the attraction is heavily focused on the Charlie boat/lift retheme I'd expect that it'll have a heavily focus on them with the traditional Plague Doctor, Executioner and Courtroom scenes thrown and the final two final scenes focusing on the grounds themselves.

I think this could be a nice addition to the park, it'll add another dark ride to the lineup and it'll add to the rides which children too old for Cbeebies wanting to do a 'big' ride as well as anyone wanting to take a break from the coasters. The Dungeons could also bring scene changes overtime to keep it feeling fresh and there's money to be made from photo opportunities as well the possibilities of a tavern and escape rooms.

The only problems I could see happening is capacity with the scenes and the fact that it is another actor led attraction.
[Insert Signature Here]
Top

I first thought it would be a scarefest attraction at first when I saw the announcement but this is better.
Maybe the merger or dark forest and CCL will actually happen to accommodate this?
Also as discussed here it'll be interesting to see if its based on real tales from the area or complete fiction. It'd be cool to see some wraiths thrown in.
Top

It'll be actual history with The Dungeons as they are supposed to be educational, they won't go with any of the rides as the stories are all made up.

Also, The Dungeons have a distinct enough brand that it wouldn't fit in with DF, I'd reckon they'll say it's in the same area as Hex (Like what they did with the dockyard at Thorpe). However I think CCL from Twirling Toadstool to Cuckcoo Cars will still remain separate.

Thinking about it, they could redo Cloud Cuckoo Land Burger Kitchen to a Victorian Tavern, that'll be a cool idea.
[Insert Signature Here]
Top

I must agree, I think this could be the most likely option. By having Charlie and a retheme of Burger Kitchen as a separate area then CCL can still be rethemed.
Top

Bert2theSpark wrote:It'll be actual history with The Dungeons as they are supposed to be educational, they won't go with any of the rides as the stories are all made up.

Also, The Dungeons have a distinct enough brand that it wouldn't fit in with DF, I'd reckon they'll say it's in the same area as Hex (Like what they did with the dockyard at Thorpe).

Sorry wasn't aware the dungeons had properties in other parks. Making hex/ dungeon area seems like a cool idea but they will have to pretty much remove CCL if its put between those two areas. I also think it could work with DF just based on the general themeing the both have wouldn't clash IMO.
Top

Not sure I'm keen on something that needs extra pay, I've paid enough for my ticket, I should not need to pay extra to enjoy the attractions of the park.
Top

wamdue wrote:Not sure I'm keen on something that needs extra pay, I've paid enough for my ticket, I should not need to pay extra to enjoy the attractions of the park.

I find logic like this troubling I do have to say. Dungeons always needs a fee to stop it from selling out too fast, if it operates anything like Warwick Castle's Dungeons, then Premium Merlin Annual Passholders will get free access nonetheless. This means less people who want to do it, and not for the sake of it being there, do not miss out, any upcharge is not necessarily just a money making tool in this instance. I also believe that the park will introduce a combi ticket for those that wish to experience the Dungeons if this goes ahead.

I don't understand why Merlin would want to install another attraction with a very high amount of staff being needed to operate the attraction. Soon after opening it will likely become seasonal.