General discussion regarding the UK's No.1 Theme Park. Talk about anything and everything Alton Towers here.
Post Reply
6780 posts

There are definitely flashes before the structure alights.. not the ORP as you can see the ORP not flash.. it flashes near the tunnel sections? What are we in for? :lol it looks brilliant! Short, but very sweet.. nom!

EDIT: Upon further watching.. it could just be people taking pictures and having their camera flashes on
“A surprise to be sure, but a welcome one”
Top

It looks a good ride. I love the effects from the Wicker Man and that fire looks really bright. I just hope it’s as cool during the day... The speed of the train is faster than the clip from the other day.
Top

It looks absolutely great, I'm really happy with how it lights up whenever a train is about to pass through
Reassess your modern lives and ignite your senses.

Worth noting that the video has confirmed the ride will feature permanent lighting near the entrance, this is in the shape of tribal torches, which is great to see at a UK park

I think it looks awesome, I just hope the park keep up on its effects and not tone them down by next year.

I watched the live stream earlier and love the look of it at night. This is a special coaster which I am sure will add even more to the appeal of Alton Towers. This is far more than just a rollercoaster, this is an experience! Roll on it opening!
Top

It's gonna be hard to try and not look up leaked details about the ride, I feel like this will definitely be a ride to go into blind.
Reassess your modern lives and ignite your senses.

I’m not sure if it’s just me, but the effects on that live video seemed to be a lot stronger than the video we posted a few days ago. It may just be because it’s dark so the flames are naturally more visible but is it possible they’re gradually increasing the size of the flames as we get closer to opening?

Dan wrote:I’m not sure if it’s just me, but the effects on that live video seemed to be a lot stronger than the video we posted a few days ago. It may just be because it’s dark so the flames are naturally more visible but is it possible they’re gradually increasing the size of the flames as we get closer to opening?

I think it’s more likely that they’ve turned them up for a promotional live stream to really show off to the GP....

It’s looking good so far but I definitely honk it needs a smoke machine in there... I’d happily donate one if they’re running short on change!
Top

I think it's also worth noting too that the live stream showed the trains speed with no test dummies in.... This thing is gonna be fast!!

Be Chosen - Join Us - You Better Not Go Alone - Assume The Position - Don't Look Down - Sit Back, It's Fright Time
Top

It looked beautiful in the live stream. I think night time rides on this are going to be a spectacle. I am however slightly annoyed by it as i feel its false promotion considering the only time the park is going to be open when its actually dark will be Scarefest and Fireworks. It would be nice to see some footage of the day time look considering it will be when the majority will visit the park
Top

I kind of get the sense that the marketing is really starting to step up more and more now, and whilst the live stream wasn't the longest it certainly did the job of getting people excited for the ride. I am certainly very impressed with what I've seen of the ride testing so far and the images that have been released and genuinely think this is going to surpass expectations. In terms of the recent live stream being at night I can see people's point about how the public will only get to see it in the dark at Scarefest and Fireworks, however it makes complete sense for the Resort to want to show the ride off at its most spectacular. Also, don't forget that many of the initial marketing footage of The Smiler was also shot in the dark - it wasn't until just before opening that we got daytime footage. All we need now is for the Resort to confirm the opening date and we can start the final countdown

Also a quick point is that these effects are going to show up on camera a lot better in dusk/night conditions....

You make an interesting point. I wonder how the rain will affect the effects?
Top

Justin wrote:You make an interesting point. I wonder how the rain will affect the effects?

It's probably going to be similar to the fire effects on The Swarm and Scorpion Express in terms of operation in weather conditions.

I don't think when the real fire effects are switched off it'll make that big of a difference anyway as there still is the LED lights from inside the Wicker Man giving the illusion of fire.

Also can I point out that I am impressed with the fire effects going off every time the train passes through the Wicker Man, I thought it'll only go off once every train or once every other 2 or 3 trains like with The Swarm and Scorpion Express.
[Insert Signature Here]
Top

I'm sure everything about the effects has been thought through in regards to weather, I can't see them not future proofing it for extreme weather in wind and rain (especially with the amount of rain we have in England

) As said above, the only real thing that could affect the fire would be wind and maybe extreme rain. I know this is Merlin but they still know what they need to do (for the most part) in regards of thinking a head for a ride.
Top

) because everything is sunk down so I can't see wind being a major issue. Other than falling branches etc. But rain on the wickerman will hopefully make the trains zoom around the track, so kinda hoping for rain ha ha.
Top

New drone footage has been released by Towers, as posted on the TowersTimes Facebook page. It shows off the theming structure and the surrounding area during both the day and night, plus there's even sound (albeit it sounds as though it's been added in post-production) :P

And in other news, Seabrook have provided more details of their partnership with Alton Towers to promote Wicker Man. The main feature being the introduction of a new limited-edition crisp flavour, Fiery Woodsmoked BBQ, which will be available from April. 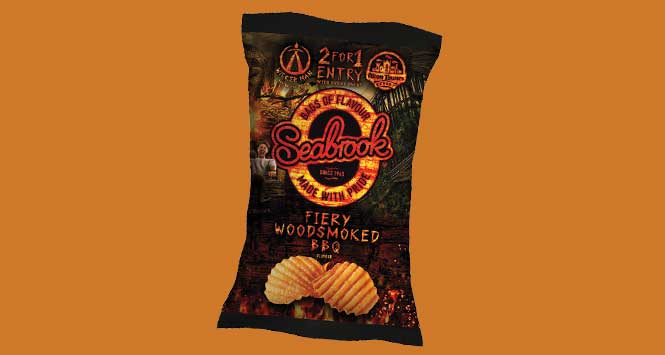